×
You are here: Home / Hoppy Thoughts Blog / Nashville in a Pint Glass: An Evening at Yazoo Brewing Company

Nashville in a Pint Glass: An Evening at Yazoo Brewing Company 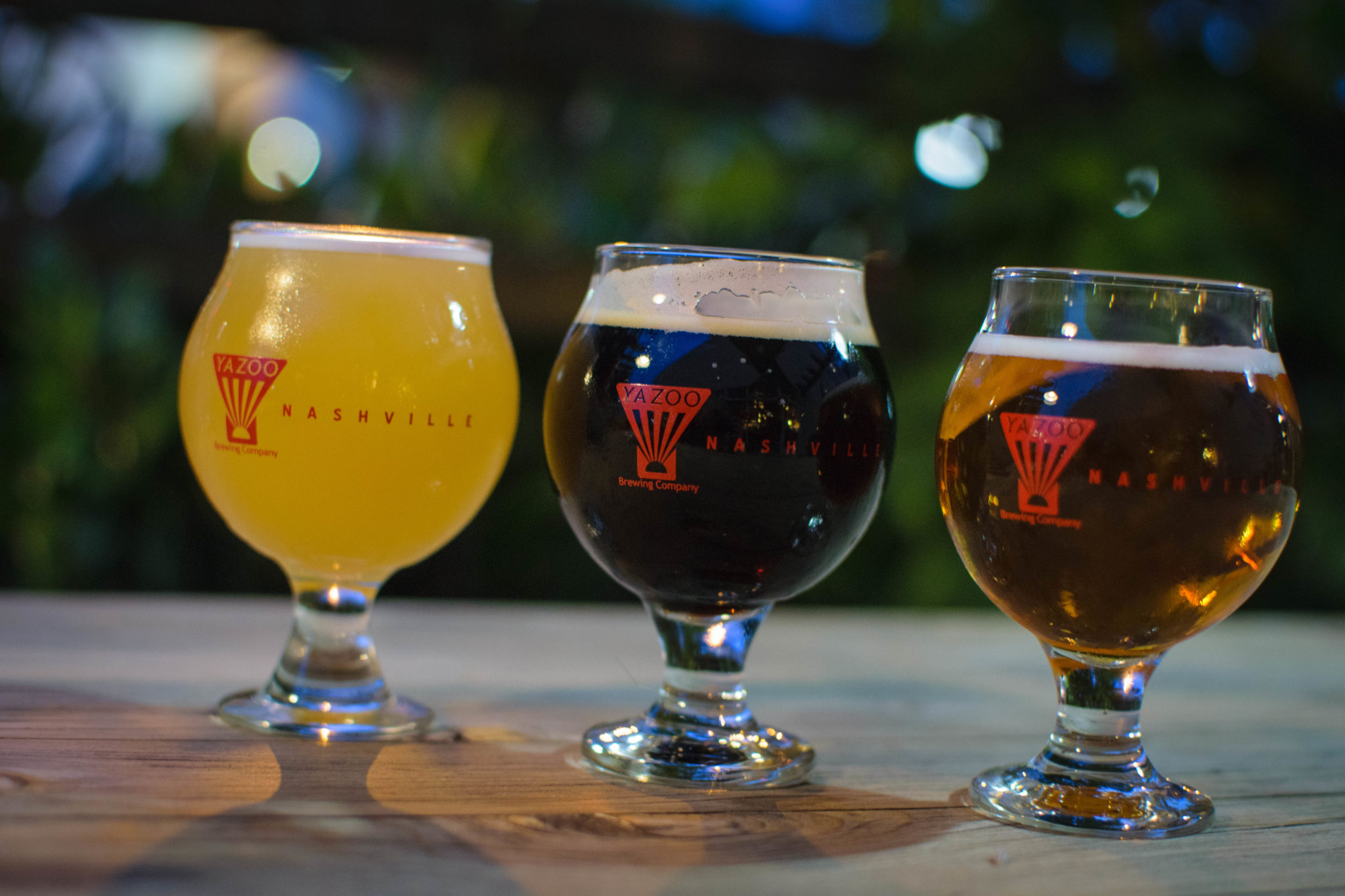 In the heart of Tennessee, evening was setting in. The setting sun cast long shadows across the brick-and-mortar shops of Nashville’s Gulch neighborhood. Amongst the boutique stores and chic bars rose the undisputed largest craft brewer in the city. The painted bricks of Yazoo Brewing Company glowed in the dimming twilight. As I neared the shady patio I could hear the growing noise of excited chatter, bursts of laughter and the clank of glassware. The tell-tale soundtrack of a successful brewery.

Yazoo is the brainchild of Mississippi born Linus Hall. Hall started his beer journey as a college student in the early 90’s by ripping out a page in Rolling Stone magazine and ordering an advertised home brewing kit. From there the beer creativity and passion was unleashed and after the many trials and tribulations of starting a new business, Hall opened shop in Nashville. He dubbed the new brewery Yazoo after the river in his home state, a flowing tributary of the mighty Mississippi. It wasn’t long until Nashville aquired a taste for Yazoo and the brewery quickly catapulted into the largest distributor the city had on offer. 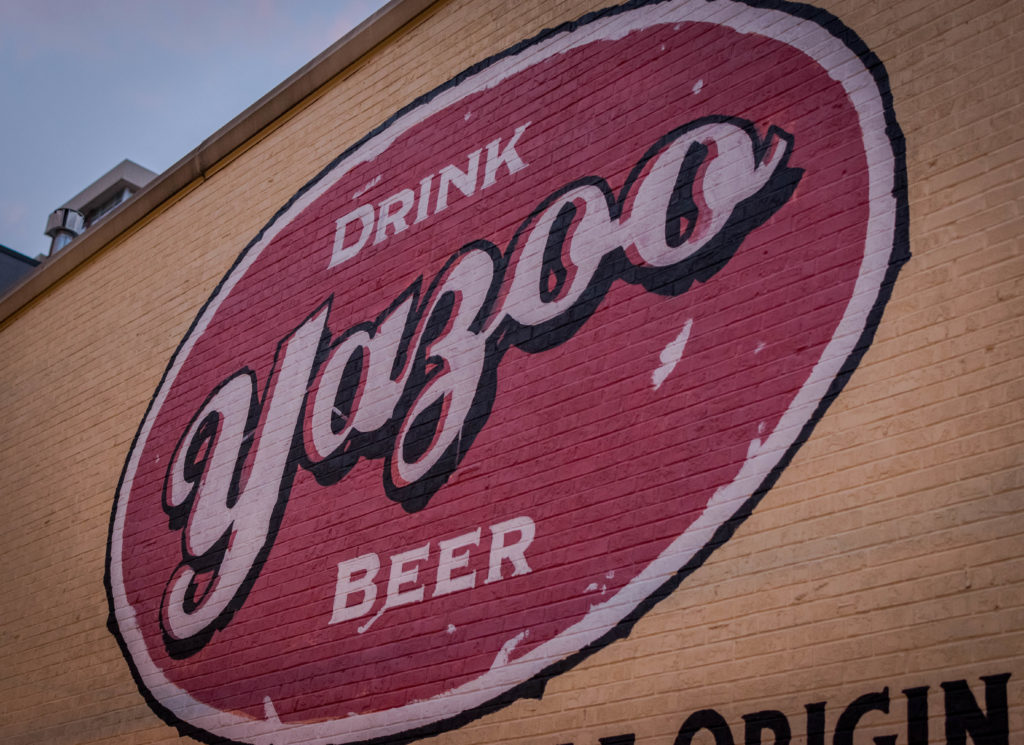 Walking inside the taproom I looked around at a room decorated with poster artwork, each frame celebrating one of Yazoo’s popular brews. Against the wall an array of brewery gear lined shelves and racks while up above metal ducts and hanging signs pointed the way towards “Beer” or “Tours.” Up at the bar I found my host, Caina manning the taps. I quickly sought her expertise in setting myself up with a flight of Yazoo’s best.

“You gotta try the Dos Perros.” she said, placing a triangular wooden flight board down in front of me. “Its one of our first beers and its really popular.” she added, gathering up some stemmed taster glasses.

“Gerst is one of my favorites.” she said, turning to the taps. “Its a prohibition ale so the recipe has some history.” she laughed.

“If you get hungry there’s an awesome barbecue place right around the corner.” she informed me, pushing the full taster board across the bar. Tennessee barbecue sounded like just the thing to compliment my flight. I’d be sure to grab some grub before I started sampling. I quickly took my beer and made my way back out onto the patio. 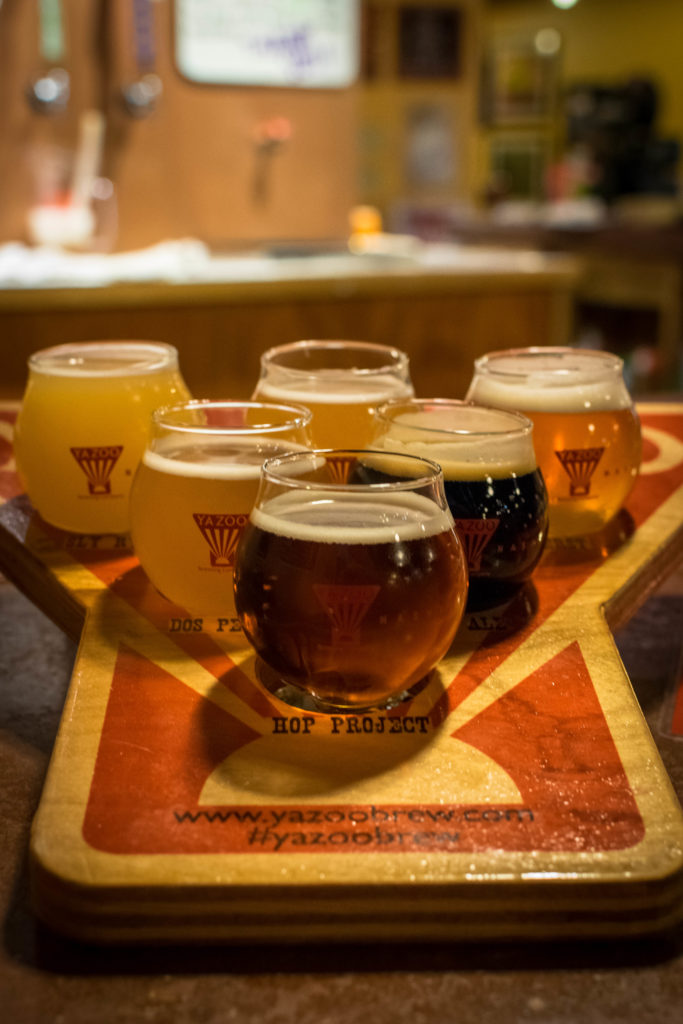 I first went for Yazoo’s award winning Hefeweizen. This beer was brewed in the true Bavarian style with wheat malt and hefeweizen yeast. I followed the scent of banana to tastes of light citrus and fruit with hints of clove. Slightly tart and slightly sweet it was a great beer for sipping on any patio on a hot day.

Gerst truly did have some history. Gerst Brewery was Nashville’s first. When prohibition rocked the nation Gerst Brewery was shuttered and never opened its doors again. In collaboration with the Chandler family, keepers of those long gone recipes, Yazoo revived one of the historic brews to make Gerst. A clean and light beer, this amber ale stays true to the family recipe by using the finest German malts and grains. Crisp and refreshing it is a fine homage to Nashville’s beer brewing past.

Gerst is not the only brew with an intriguing back story. Dos Perros, the Yazoo fan favorite also has a rich history. One of Linus Hall’s first creations, it was born in the years before the birth of Yazoo. A batch he cooked up special and served at his sister’s wedding it quickly became a hit of the party. This Mexican style brown ale combines with German, English, and chocolate malts to give it a dark rich body while Perle and Saaz add a bite of hops. Yazoo lightens up the beer in the traditional Mexican style by throwing in a small amount of flaked maize. Extremely balanced and flavorful I could immediately see why Caina had toted its popularity.

In the dusk I sat on Yazoo’s patio emptying the line of taster glasses under a string of hanging lights. The Gulch was coming alive as Nashville’s night scene began its daily ascent. Just a stone’s throw away was Music Row. Home to famous record labels, radio stations, and recording studios, the neighborhood produced much of the world renowned music Nashville was known for. Right outside the musical neighborhood with a local brew in hand and a plate of rib bones at my side my experience at Yazoo was quintessentially Nashville.

People continued their flood onto the patio. I watched as they ordered up their favorite beer and added to the crescendo of revelry. Clinking pints, unabated laughter, and fevered conversation. I couldn’t help but smile at the atmosphere. Despite our proximity to the legendary Music Row it was right here on Yazoo’s patio that I found the true Nashville Sound. 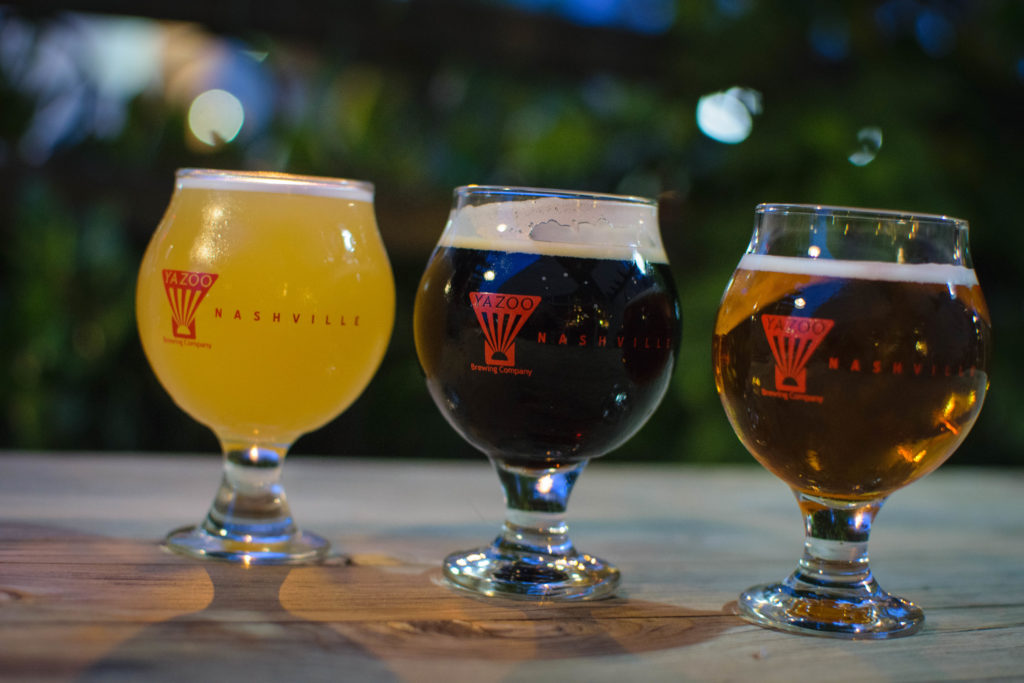