×
You are here: Home / Hoppy Thoughts Blog / Science and Beer Come Together At Wavelength Brewing Co.

Science and Beer Come Together At Wavelength Brewing Co. 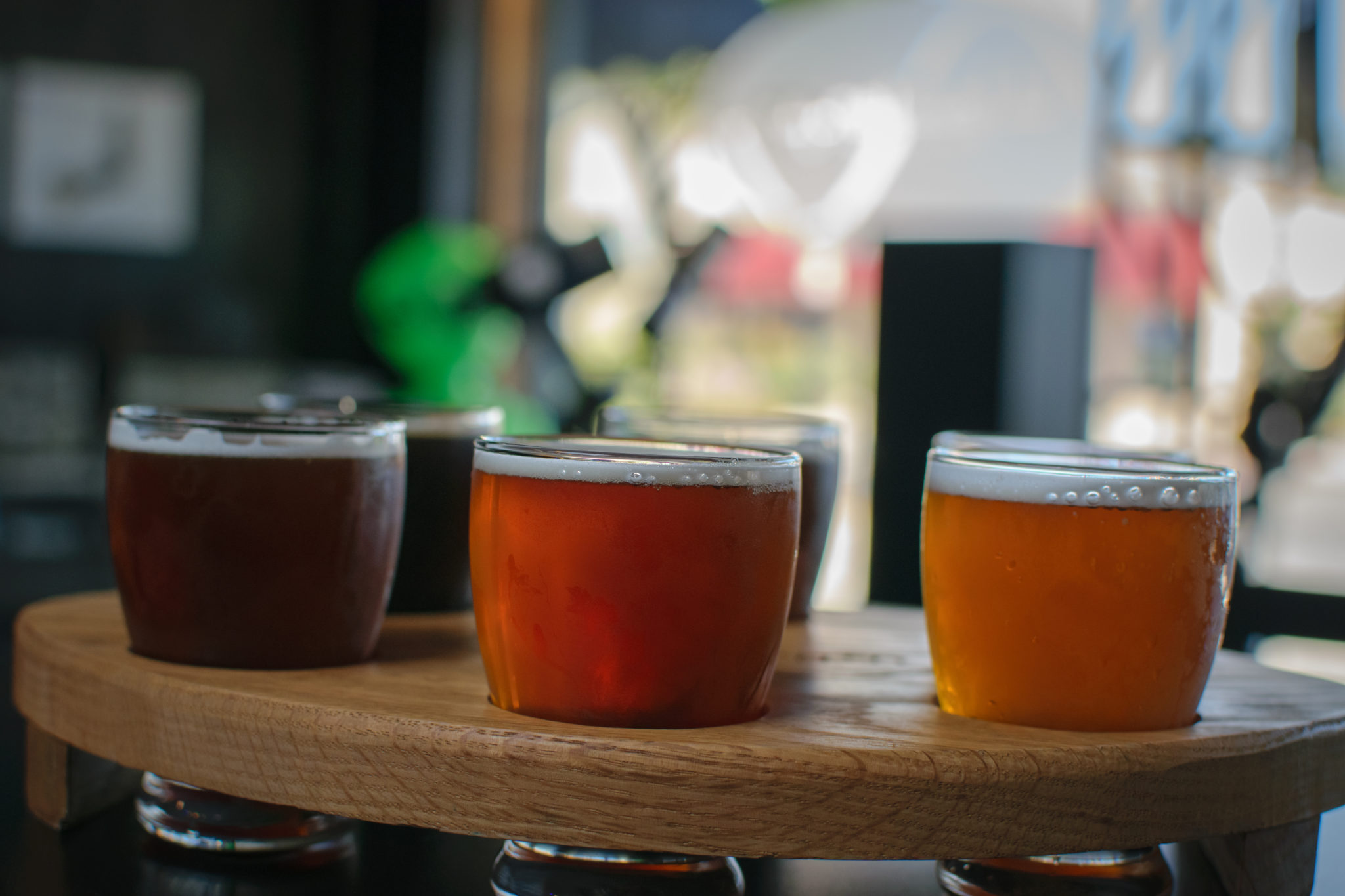 I slipped through the doors of Wavelength Brewing Company just as the brewery opened one early Tuesday afternoon. Glancing around the taproom it didn’t take too much detective work to put a finger on the brewery’s theme. It was as if employees of NASA got together with the cast of Big Bang Theory and decided to start brewing beer.

Everywhere I turned there was some of element of technological history, astronomy or sci-fi pop culture. Shelves were lined with Geiger counters, shortwave radios, and Stormtrooper helmets. At the front window a row of telescopes sat poised at the sky. On the wall, multicolored laser dotted lights illuminated the brewery’s logo while below a framed newspaper clipping toted Charles Lindbergh’s solo flight across the Atlantic. 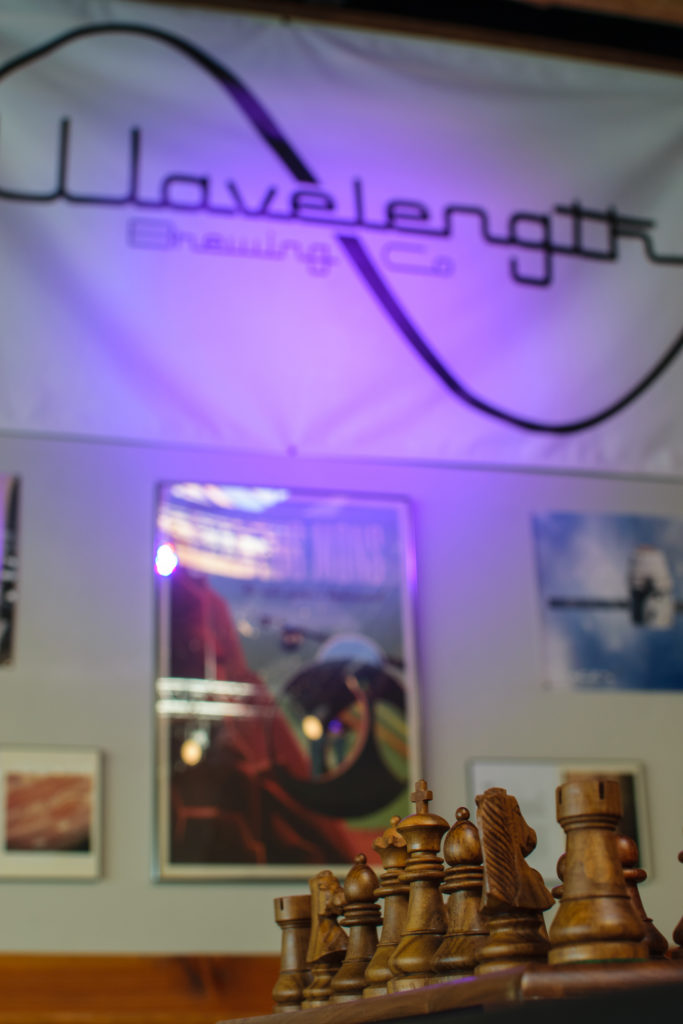 I found Caylin up at the bar, readying the taproom for an evening of slinging Wavelength brews. I commented on the décor.

She looked around the taproom, “Yeah, thats the name of the game around here.” she smiled, “We’re as passionate about science as we are about beer.”

As she pulled out some fresh taster glasses she began listing off the brewery’s special events.

“We do all kinds of stuff. Lots of science outreach.” she talked as she lined up the tasters on a wooden board. “Guest speakers and talks from local scientists, movie and documentary screenings, we just gave a showing of Particle Fever.” she flipped the last glass onto the board. “I think its on Netflix.”

She laughed, “One of my favorites is Drink and Doodle.” she explained the event as similar to those courses where you sip wine and everyone paints a similar picture. “It’s a lot of fun.” she chuckled, “Some of the drawings are even more fun.”

While Caylin turned to fill the tasters with beer I glanced up at the two overhanging flatscreen TVs. No local sportscast or national news report blared back at me. On one screen a cluster of grizzly bears pounced and swiped at salmon in a fast flowing river within Alaska’s Katmai National Park. The adjacent TV showed a slow pan of satellite footage from the International Space Station, the feed was currently moving over the gentle white capped waves of the South Pacific.

As she turned back she caught my eyes entranced, watching both screens.

“Both are live webcam feeds.” she said, “They’re awesome, could watch this stuff all day.” she added, as she slid a full taster board in front of me.

Hazy and golden amber in color I picked up a glass of Octave Orange, Wavelength’s signature wheat ale and according to Caylin, a fan favorite. Full bodied and rich in flavor the cloudy brew had just enough citrus and added naval orange flavor to make for a highly drinkable ale. Sky Watcher, an imperial double IPA was a glass full of hoppy bitterness. Bold Calypso hops rounded out this balanced pale with rich caramel malts.

I moved to Redshift, an American red ale. Dark crimson in color, initial flavors of roasted malts were rounded out by gentle notes of hibiscus. All of this accented with a quick floral bite on the finish. Looking for something darker I ended my flight with Off Kilter, a Scottish heavy ale. An exceptionally rich malty body was smoothed over with the addition of Madagascar vanilla bean on the finish.

As I sipped my beer an eclectic array of science knick-knacks caught my eye. Scattered throughout the bar surface were all manner of games of logic; chess boards and Rubix cubes. A plasma globe shot purple bolts under its glassy surface beckoning to be touched. I chuckled at a saintly looking Neil Degrasse Tyson, smiling back from a tall mock prayer candle. 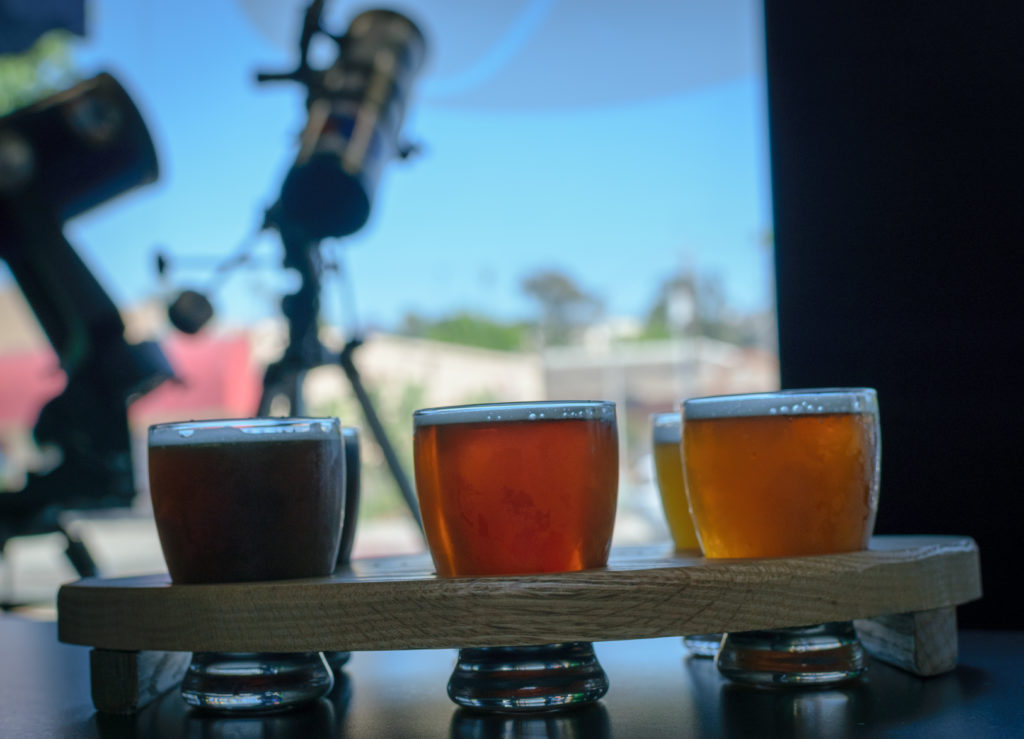 I looked up as a figure emerged from behind a back door, joining Caylin behind the bar. Han Haas, home brewer, self proclaimed science aficionado and Wavelength co-founder came up to greet me. Tall and muscular with a full beard he looked more brewer than scientist. As he spoke he detailed for me the brewery’s history and inspiration. It wasn’t long before the science lover in him began to shine through.

“We host regular star parties.” he gestured towards the telescopes at the window. “Folks come out and we head outside to check out the stars and planets.”

His eyes lit up as he talked about the brewery’s regular guests from the University of California: San Diego. Astrophysicists, chemists, biologists, and electrical engineers all have flocked to Wavelength to spread some knowledge over a pint of hand crafted beer. Recently a professor had just stopped by to give a talk about particle physics.

As I settled up my tab I was fascinated by the brewery’s whole concept I couldn’t resist picking his brain further. I wanted to know how these two passions, beer and science became so intertwined. Hans summed it up beautifully like any man-of-science, explaining a complex question in down-to-earth terms.

“It’s often overlooked by customers, but it’s science, biochemistry that really makes beer.” he lifted his hands as if to weigh both these elements. “I started out home brewing, and it was definitely a passion.”

He smiled, “But it’s definitely my passion for science that fuels my love for beer.”