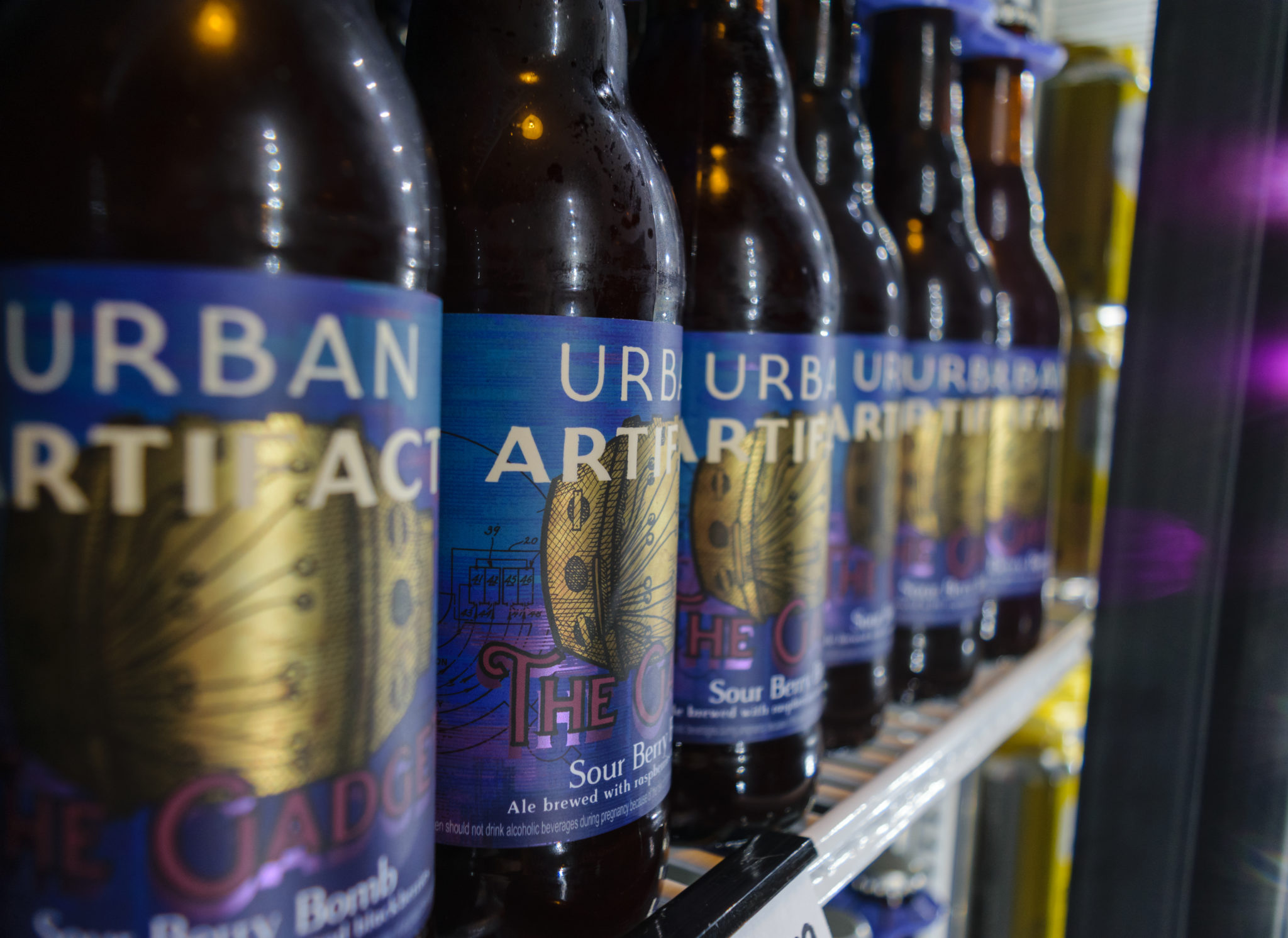 I stood curbside and stared up at the massive stone structure of St. Patrick’s church. It’s steeple jutting skyward capped by a wooden cross looked ominous beneath a blanket of overcast clouds. Bypassing the steps to the front door I skirted to the side of the church, making my way down a short corridor towards a less conspicuous set of double doors. While many had once come to St. Patrick’s seeking worship or forgiveness I was there for a different sort of libation. I was here for craft beer and St. Patrick’s just so happened to hold a brewery in its depths. I speak of course of Urban Artifact. 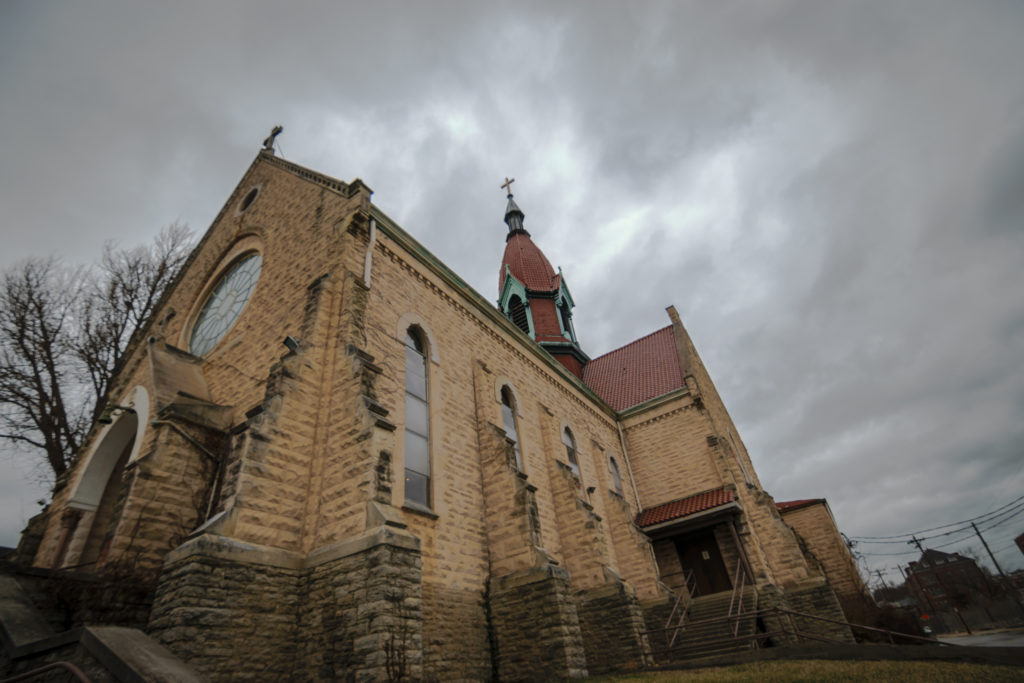 Passing through the doors into the church’s basement I was met with a stark contrast to the stone, stained glass, and buttresses above. My eyes adjusting to the low light I scanned the taproom. Sleek booths and live edge wooden tables lined the walls. A stout bar dominated the room’s center, flanked by a well lit case of Urban Artifact’s bottled creations. A mosaic sign marked the archway to a second room with a low stage and multi-colored lights. The electric beat of Foster the People pumped overhead. One word came to my mind: funky.

If the aesthetic was funky, the many beers that Urban Artifact churned out through their neighboring brewing facility were even more so. Toting to harness the power of the mirco-world, Urban Artifact prides itself on utilizing natural bacterias, cultures, and yeasts to create unique and wild flavors.

Having a seat with my modest row of tasters I assessed the line-up. Many of Urban Artifact’s beers verge on the realm of tart and sour betraying the many wild fruits and flora that they’re born from. Picking up a glass of The Gadget my lips instinctively puckered when the bright red brew hit my tongue. Filled with the essence of rich blackberries and tart raspberries the ale combined a sour start with a sweet finish. Keeping my pallet tart I moved on to Whirligig, a purplish blue ale which was chocked full of wild blueberries. While much milder than The Gadget, Whirligig still had initial sourness but not enough to overwhelm me. I could see sipping it regularly on a hot summer day.

Checking out the description for each beer on Urban Artifact’s menu I was struck by the fact that in lieu of the traditional IBU scale to designate each brew’s bitterness Urban Artifact opted instead to use the ph scale. With its pension for tart ales and sours the switch up made perfect sense. At 3.5 on the ph scale Keypunch, a Key Lime Gose packed a shock of sour followed by a finished flavor of salt and biscuit.

This isn’t to say every one of Urban Artifact’s beers all traverse the sour world. Phrenology, the brewery’s wild IPA is a traditional combination of Chinook and Mosaic hops to bring forth a punch of bitter flavor and floral earthiness. It’s one they say gets better and more “wild” as it ages. On the other end of the spectrum, Kicksled, a Winter Spiced Stout is packed with nostalgic seasonal flavors like vanilla, dark rum, and roasted nuts. The body is creamy and smooth with a sweet finish. 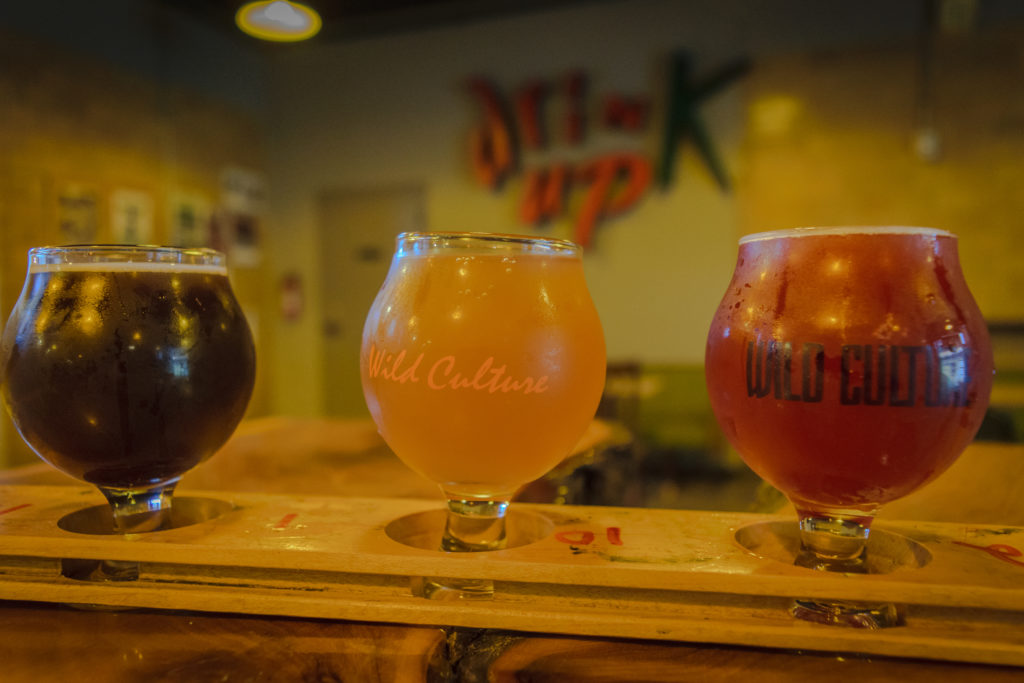 Aside from the funky beer and hip atmosphere, Urban Artifact hosts a number of events each week. Live music on their humble stage varies from local legends and hometown rockers to 80’s night and big band music. Whats more Urban Artifact has teamed up with local artisans and started the Artifact Club for its closest supporters. Members enjoy benefits on discounted growlers, heads up on new releases and a handmade stein sourced by a local artist to drink all that funky beer from.

Emerging from the basement doors back onto the street I stood once again in the shadow of St. Patrick’s. The story of the relationship between the brewery and the church comes full circle. Paying homage to its host, Urban Artifact has a long term goal of helping to restore the upper levels of the church to its former glory. By catering special events such as weddings, receptions, corporate events and parties Urban Artifact seeks to utilize the beautiful space while keeping the character and history of the church alive. 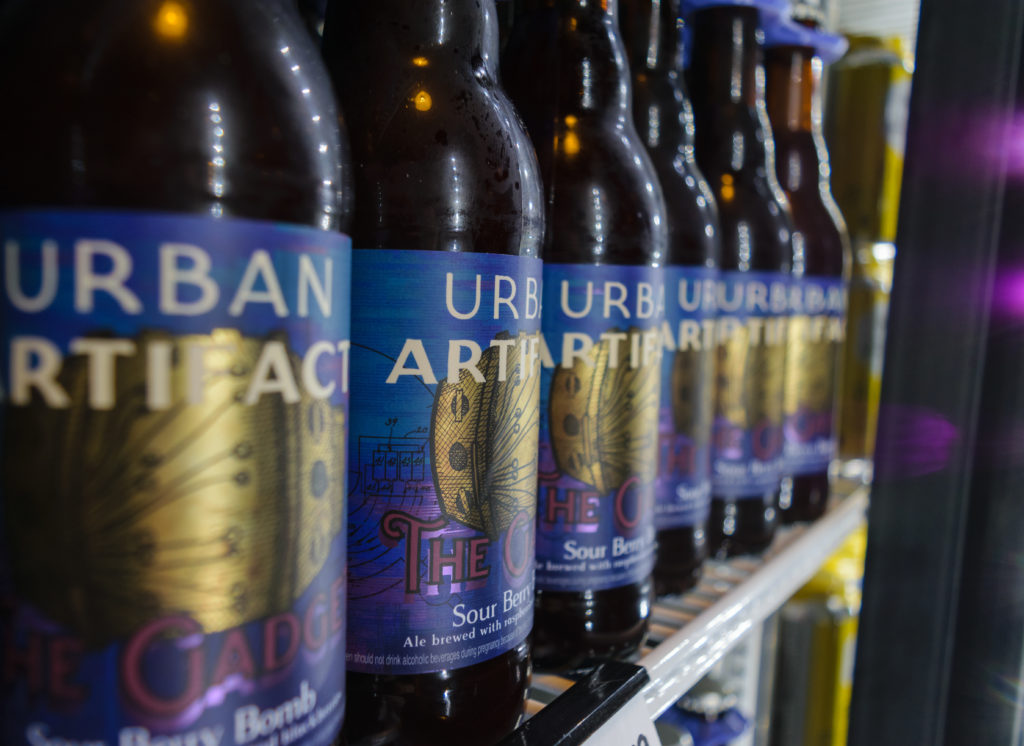 As I grabbed the handle of my car it struck me that looks were so deceiving. From the outside I saw nothing but a stoic church but on the inside was funky beer, musical vibes and a brewery with attitude. The relationship between St. Patrick’s and Urban Artifact was another page in the lesson book of being pleasantly surprised when not everything is as it seems.