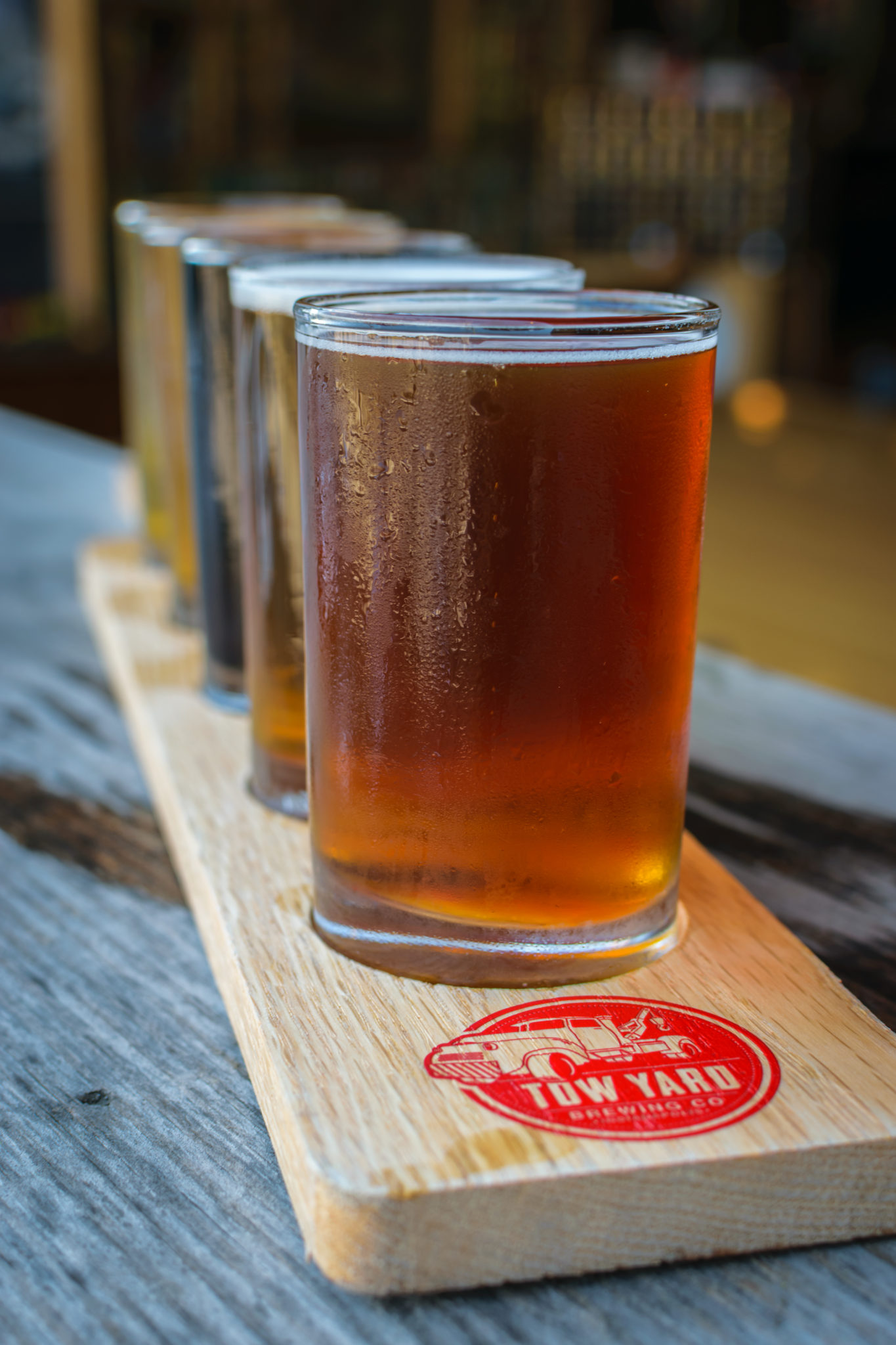 The afternoon sun beat down, seemingly making the red brick of Tow Yard Brewing Company glow in the heat. Rays reflected and bounced off of chrome stools and metallic seating. The brewery appeared to shine like a beacon in the spring Indiana heat.

Taking a seat on the brewery’s modest patio I stared out through the sun towards the Indianapolis skyline which rose tall on the horizon. The brewery’s large sliding windows were swung wide, revealing Tow Yard’s inner workings to the spring air. A wall of vintage beer cans lined the space behind the taproom bar contrasting well with the gritty brick that made up the rest of the building. Tables and stools occupied the wooden taproom floor, and after further inspection I noticed that the lanes of bowling alleys had been repurposed and now served as mock tabletops. The brewery’s logo, a tow truck emblazoned within a black circle dominated the far wall. 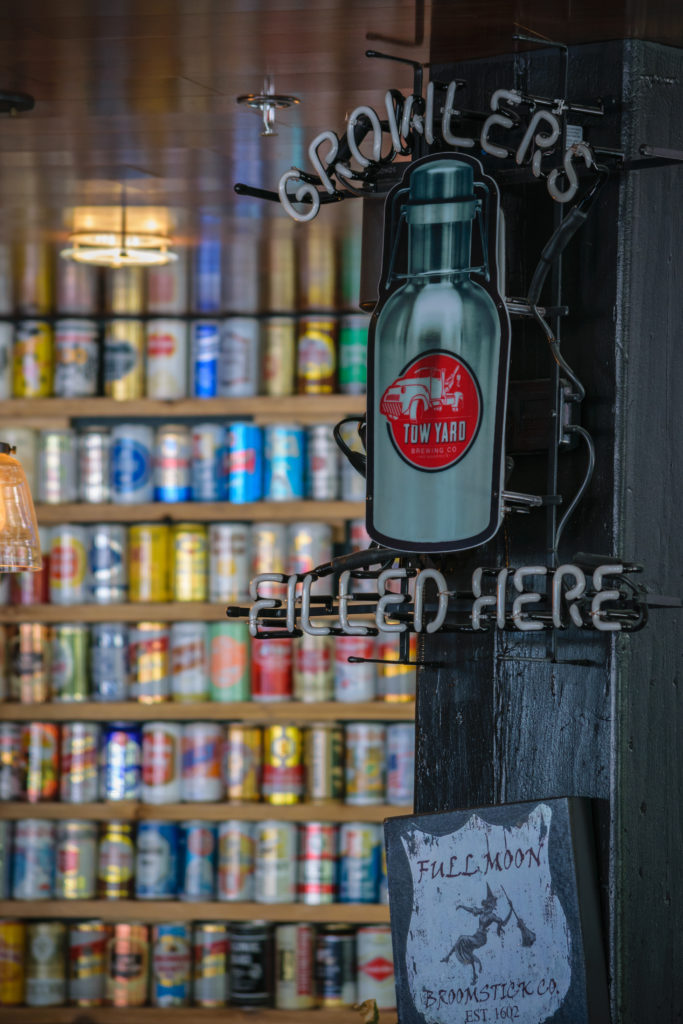 Looking down the patio I saw a group of guys excitedly chatting and laughing around a round table. All of them wearing identical t-shirts betraying their occupation as local firefighters. Hearing more chatter and laughing behind me I turned to see another group of firefighters, from a different house come strolling up the stairs from the sidewalk onto the patio. As if to accentuate the point further, at that moment a firetruck came barreling down the street, roaring passed the brewery, sirens blaring.

“We’ve got the largest flight pours in Indy.” Sean, my server exclaimed proudly as he slid a row of beer glasses down in front of me.

Drops of condensation dripped down the taster glasses, the hues of amber and red shining bright in the sun. Each one of the glasses looked extremely inviting. I immediately reached for Hook Up, Tow Yard’s take on the classic summer shandy. Goldie Hops combined with a citrusy local soda made for a highly drinkable brew on a hot day. Notes of grapefruit and citrus added sweetness that reminded me of the true shandys from the heart of Germany. 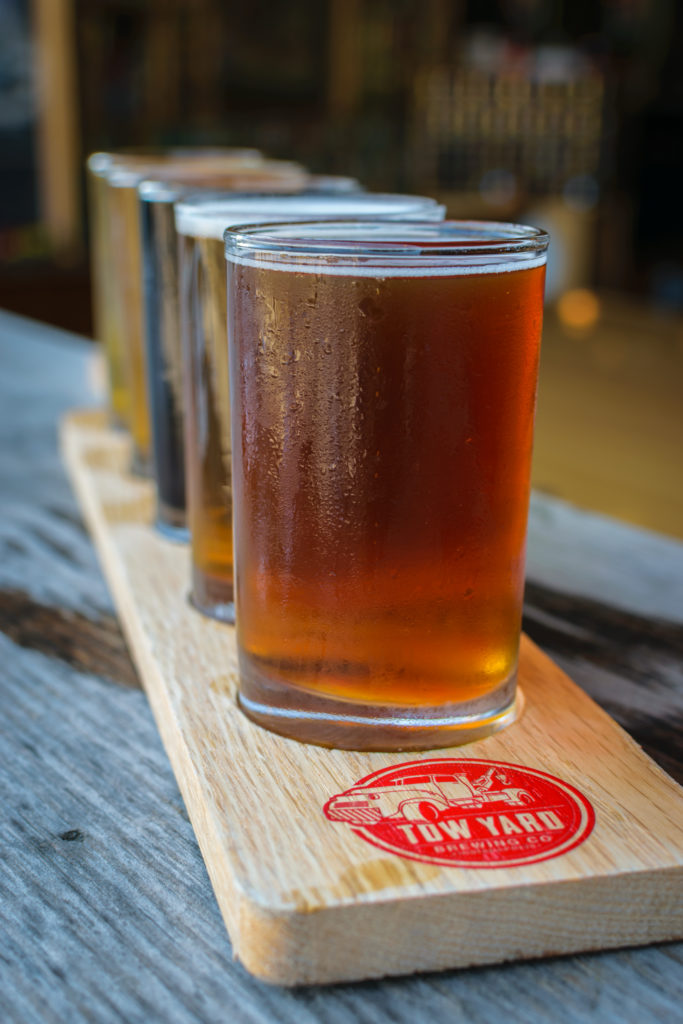 Goldie, Tow Yard’s flagship golden ale mixes Magnum and Saaz hops to create a light and airy ale. A pint of Goldie is the perfect compliment to finishing up a hard days work or sipping on your weekend downtime.

Enjoying my beer and glancing around the room I took notice of a chalkboard listing down daily specials for the week. Tow Yard offered something new every weekday. From $5 growler fills to $2 pints and cheap appetizers there was plenty of incentive to make Tow Yard your local watering hole.

From the team of firefighters to the tow truck iconography, the blue collar flavor of Goldie to the vintage cans and brick walls it dawned on me that Tow Yard was very much a working man’s brewery. In this, Tow Yard has pulled off something seldom seen in the craft beer world. Combining well crafted beer with that old timeless feel of a homey dive bar that you want to make a pit stop at on your way home from a day on the job. The beer: tasteful with no frills. The taproom: rugged and inviting with no bells or whistles. The daily specials: straight and to the point. With the sun on my back I finished up my glass of Goldie, became absorbed in the fishing program on the hanging flatscreen and felt relaxed. 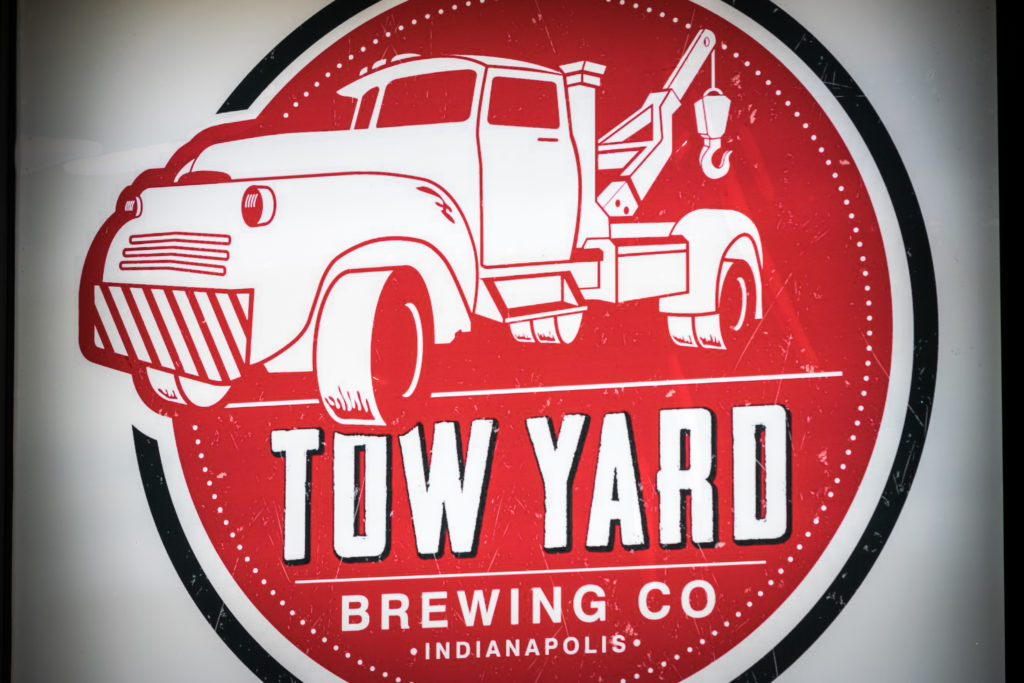