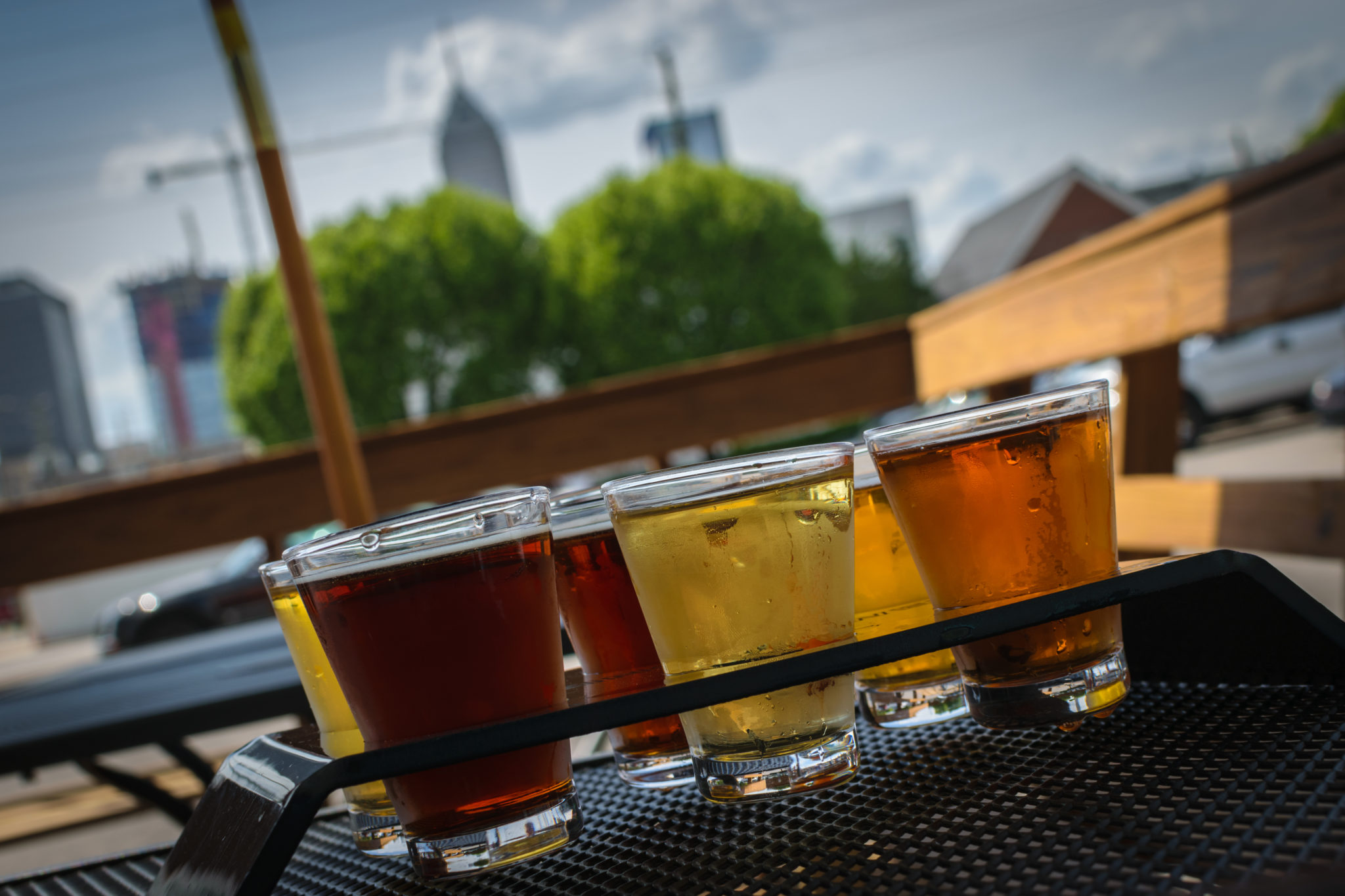 It was a hot spring day in Indianapolis. Heat radiated off the sidewalk as I pattered down North College Ave. The sun beat through the blue sky sending flares of light reflecting off the glass of distant skyscrapers. Through the heat haze, concrete and asphalt I saw the Mayan sun god staring back at me from across the street. The traditional gold emblem had a unique twist, instead of the icons representing the calendar months, the images around the god were those of barley, wheat, hops and water. This was a god of craft beer. I had stumbled upon Sun King Brewery. 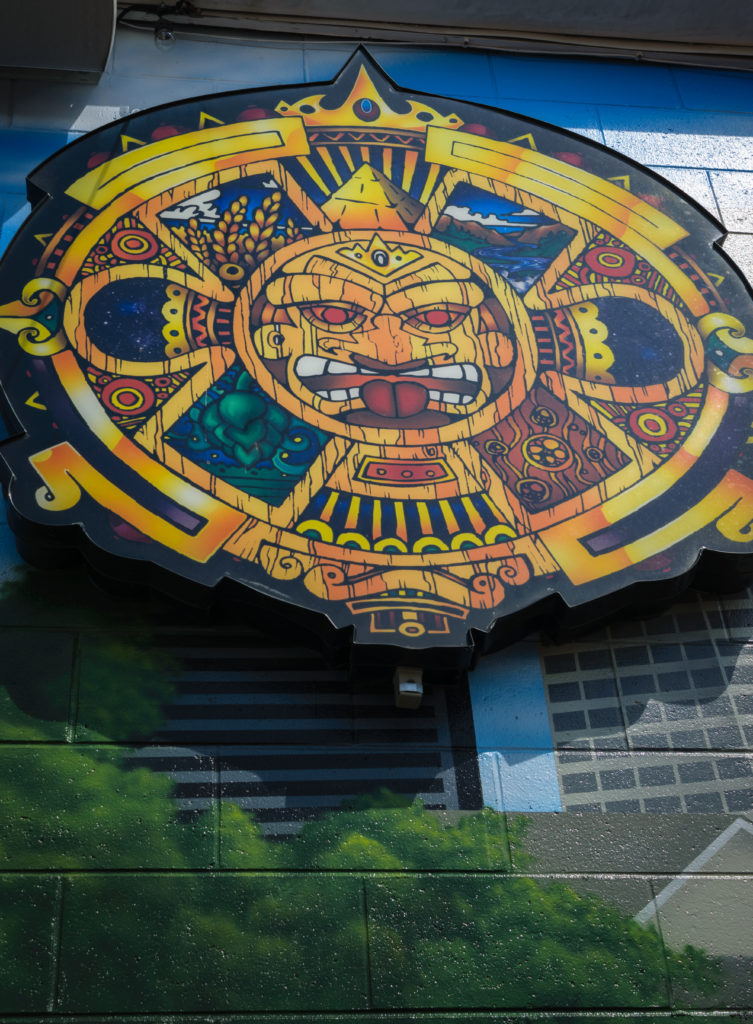 I passed by the patio. Couples with pint glasses huddled under the shade of large table umbrellas, groups of friends decked out in sunglasses and tank tops. I pulled the door and entered the spacious taproom.

Out of the sun it was cool inside the wide open space. A high warehouse ceiling arched overhead while an array of ropes quartered off the parameters of the taproom from the production area of the brewery. A whole wall was occupied by a long bar, taps and stools extending down its length almost too numerous to count. High above the Sun god stared down from a central place on the wall overseeing each pouring.

An assortment of tables of all shapes and sizes occupied the main floor, while off to the side one was stacked high with board games. My eye picked out the classics; Jenga, Connect Four, and Rockem’ Sockem’ Robots. It wasn’t long before my host and Sun King representative, Matt came up to greet me.

“Wanna come check out the brewery?” Matt asked, pulling aside a section of rope.

Walking me through the corridors of Sun King’s expansive barrel system Matt talked as we moved, our bodies reflected in the chrome of the giant holding tanks.

“Now we only distribute locally.” Matt said, “Indiana, that is.” He added, “As far as the craft beer scene in this state goes we want to be a household name.”

Bringing me up to a hanging clipboard with production statistics Matt ran his finger down the list.

“Sunlight, our cream ale is definitely the favorite.” He said, his finger tapping the name on the list. “About forty percent of what we produce is Sunlight, but besides that we like to keep a rotation of nine beers on tap.”

Walking by pallets stacked high with kegs of Sun King brew we next entered the bottling and packaging facility. Pointing out a bottler, Matt added proudly, “That baby churns out one hundred bottles a minute.” He noticed my gaze fixed on a familiar picture hanging from the top of the machine. Signature afro and beard, the smiling figure turned facing the camera with a paint brush in one hand and a canvas in the background.

“Bob Ross keeps everyone motivated.” he added with a laugh.

Moving back towards the taproom I passed a brightly colored vending machine.

“What’s the deal with this?” I asked.

Matt laughed. “That’s Shifty. Our employee beer machine. Dispenses all of our favorites.” he gave the machine a loving pat and chuckled. “Shifty keeps everyone very motivated.”

Thanking Matt for his time I took a flight of house beer from the taproom and seated myself out on the sun drenched patio. Starting things off on a darker note I picked up a taster of Wee Mac, Sun King’s Scottish style ale. A malty brown ale, I picked up tones of caramel and chocolate with hints of hazelnut and toffee. One of Sun King’s flagship beers it’s no wonder it won gold at the 2010 Indiana Brewer’s Cup.

Cherry Busey, a rotating seasonal is a Flanders style ale which keeps things exotic by mixing in a multitude of yeasts and the robust tart flavor of Montmorency cherries. The resulting taste is slightly sour and refreshing. Osiris, a pale ale named after the son of the Egyptian sun god, Ra is a flavorful pale brewed in the classic West Coast style. Plenty of hop punch and citrus undertones keeps this beer highly drinkable and a signature Sun King flagship brew.

Last up, I hefted a glass of Sunlight, Sun King’s headlining beer. Extremely well balanced and smooth, its taste reflected everything a cream ale should be. Crisp and clean I tried to pick up on the variety of malts the brew had to offer as I finished. A multiple award winner within local and naitonal beer competitions I could see why it was such a fan favorite. 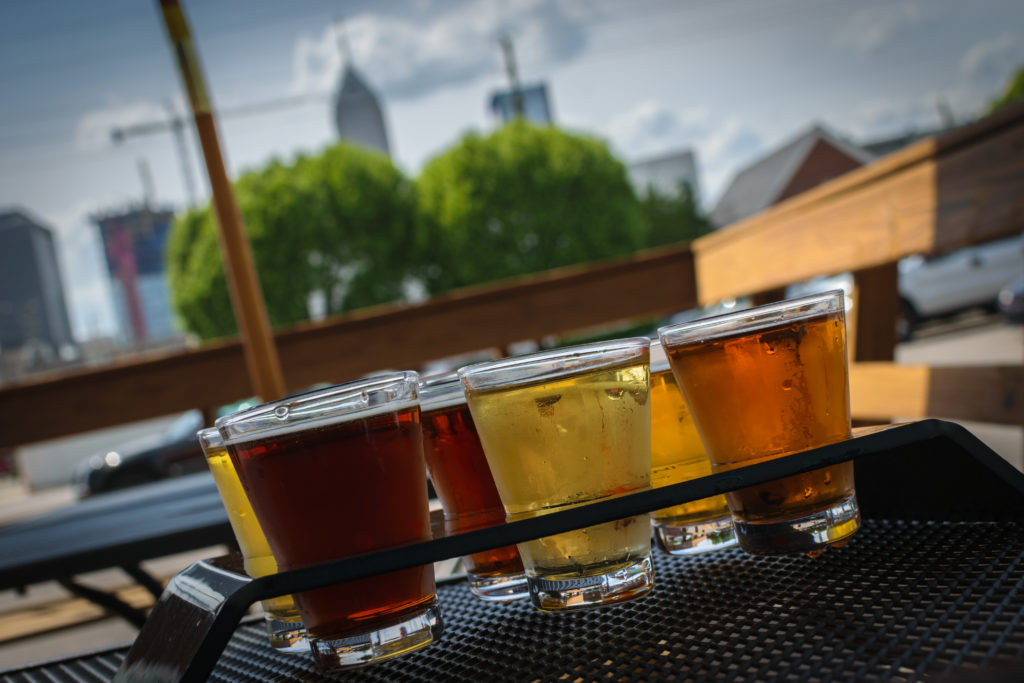 Holding up my glass the sun’s rays beat down in front of me, shining through the rich brew and turning the amber colored beer to gold. At my back the Mayan god looked down from the brewery’s outside wall, watching every refreshing sip I took.

All hail the Sun King.