×
You are here: Home / Hoppy Thoughts Blog / Beer for the Ages: Living Up to the Hype at Stone Brewing Company

Beer for the Ages: Living Up to the Hype at Stone Brewing Company 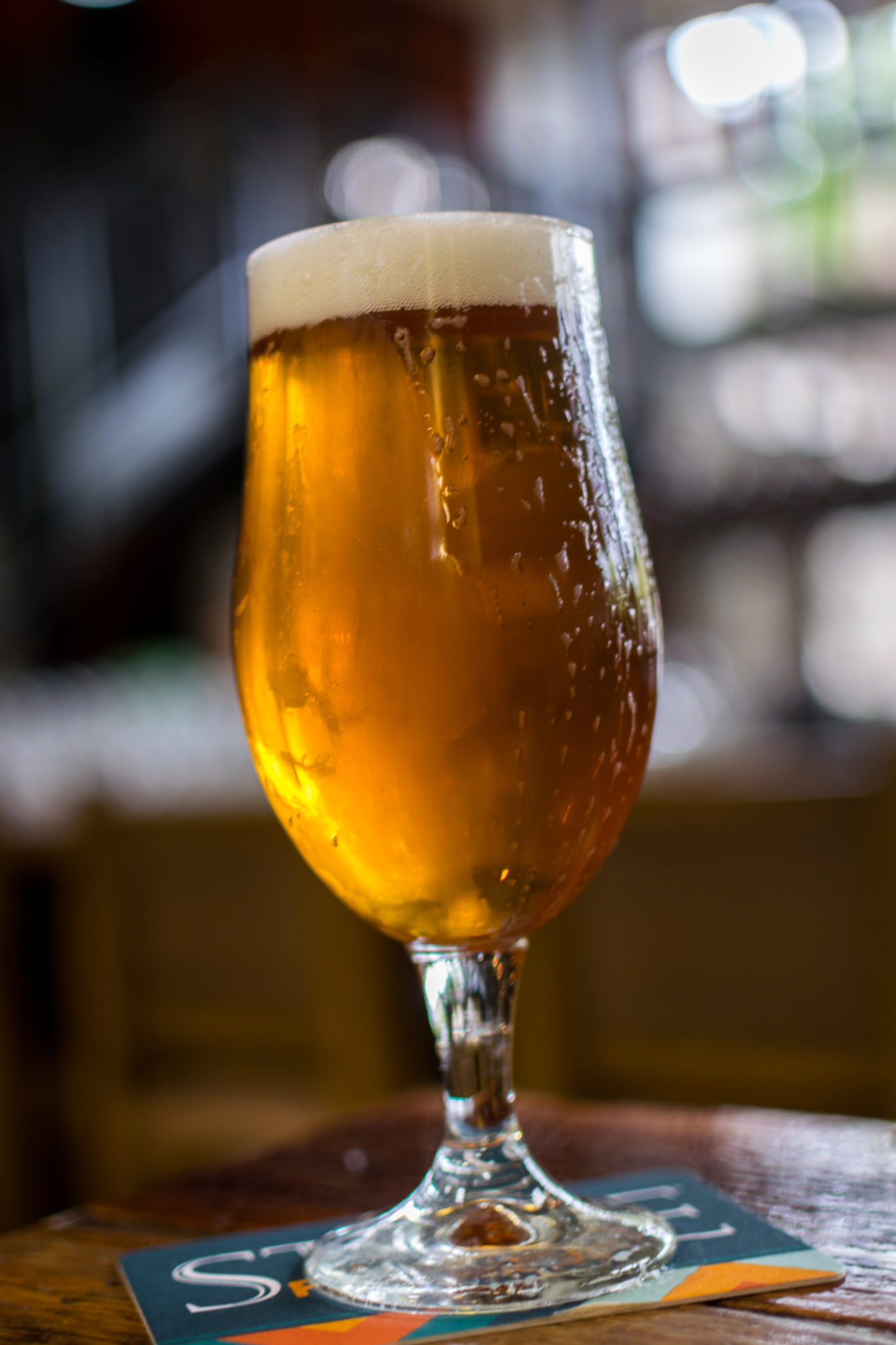 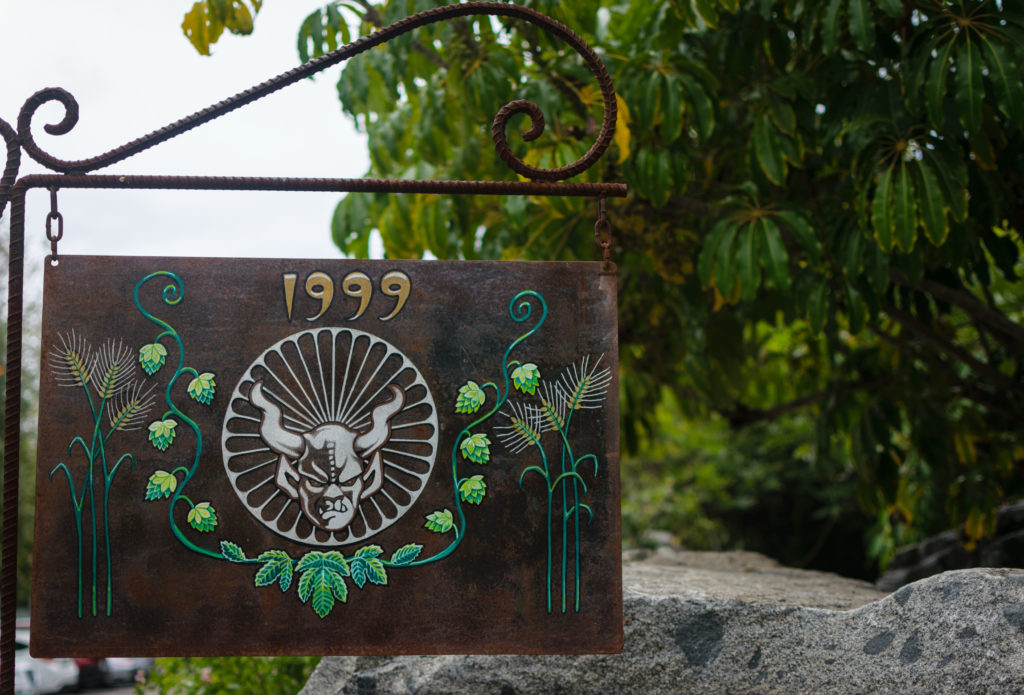 I turned twenty one while living in Vermont. I remember being able to actually go to the liquor store and choose a beer I wanted rather than just take what was handed to me. Out of all the local options that graced the shelves I remember one craft powerhouse that was always present. Stone.

To say Stone is a pillar of the craft beer community is an understatement. At just over 20 years old Stone has climbed to one of the largest craft breweries in the United States. The famed Stone Brewing World Bistro and Gardens is toted as not only a place to sample exceptional beer but a top culinary destination. Stone has two such locations in the Southern California region as well as one in the beer metropolis of Berlin, Germany and a soon to open location in Richmond, Virginia. Amongst these accolades, Beer Advocate magazine has twice named Stone, the “All-time Top Brewery on Planet Earth.” As I took a seat at the bar its safe to say my expectations were high.

Pulling up a stool at the Escondido World Bistro and Gardens, Stone’s status in the craft beer world was evident in the taproom’s appearance. Booths lined the walls with sleek wood panels, trees sprouted from the floor and water bubbled and flowed over an outcrop of boulders. A high vaulted ceiling with a slanted wall of glass flooded natural light into the taproom from the gardens beyond. The bar wrapped around to dominate the far portion of the room while over the entrance a precision cut engraving of Stone’s mascot, a massive winged gargoyle graced the wall. The Feng Shui layout was emphasized by the light beat of Chill Wave music reverberating from the air. 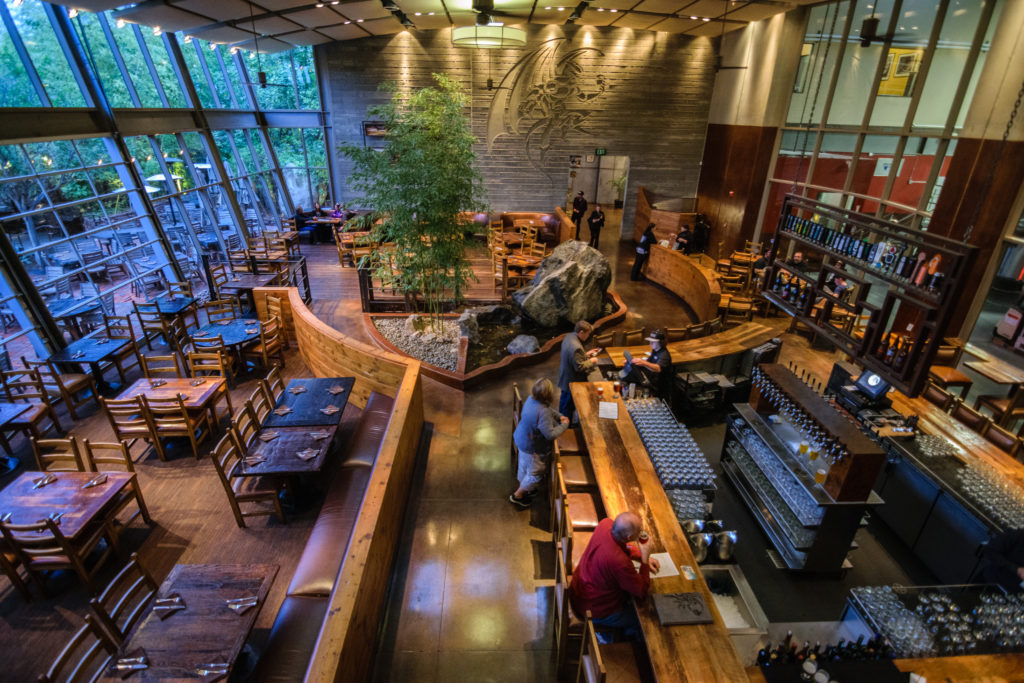 I ordered up a pint of Stone’s claim to fame, the Ruination Double IPA. Stone, born in Southern California in the heart of IPA country has bragging rights of being able to name Ruination as the first brewed and bottled West Coast style IPA in the world. Its initial bite is complimented with notes of pine and tropical citrus. Heady and full bodied, Ruination is everything you want a double IPA to be. 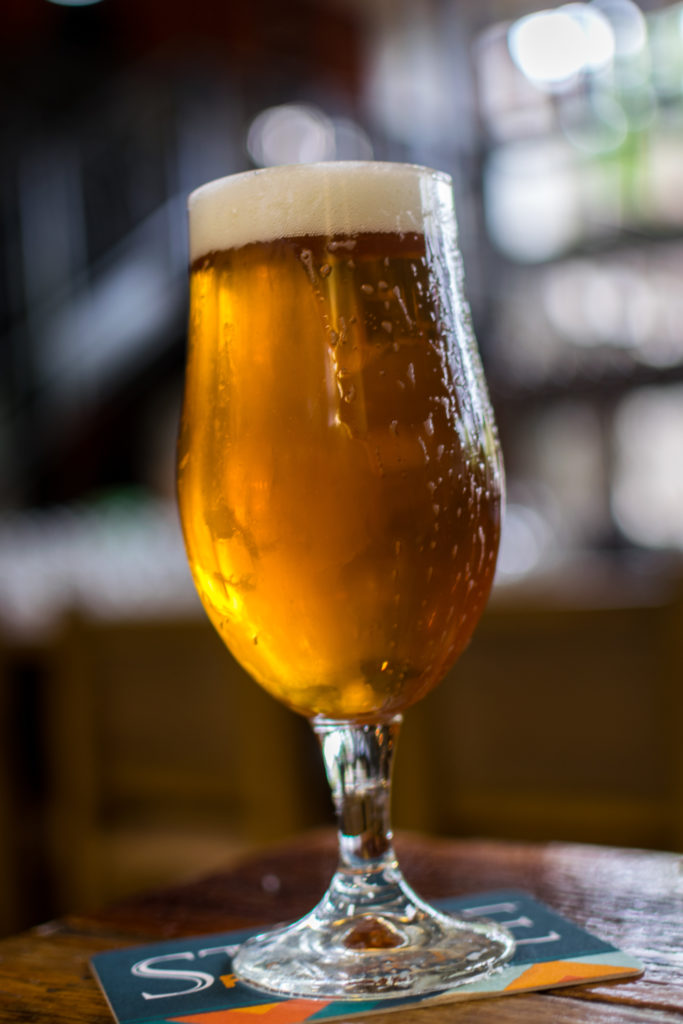 “What can I get for you?” the bartender asked, placing a coaster down in front of the stool next to me as a tall burly man sat down.

“Can I get a taste of that Stone Ripper?” he asked after thinking for a moment.

Stone Ripper, a bold combination of Cascade and Australian Galaxy hops are paired with flavors of grapefruit and passion fruit to make a classic West Coast pale. Perfect for summer sippin’ and those that aren’t quite into a full on IPA.

Bringing the taster to his lips, past his tumbling white beard and under the rim of a dark green trucker hat his eyes lit up.

“Want to make it a glass?” the bartender asked with a smile.

He laughed, pointing his taster at the row of taps, “Why don’t you start there and we’ll work our way down.”

Next down the line was Stone Delicious IPA, a fusion of Lemondrop and El Dorado hops that come together to make a tart and bitter flavoring that is both well balanced and one-of-a-kind. While IPAs and pale ales are what makes Stone famous it isn’t the only thing they are sporting. Rotating seasonals like the Xocoveza, a winter spiced mocha stout and limited releases like the Chocolate and Coffee IPA add delicious variety.
Ever a fixture in the craft beer community Stone also takes time to collaborate with fellow brewers in the industry. The barrel aged Saison du Buff combines the minds of craft beer powerhouses Dogfish Head, Victory, and Stone to make a sweet and flavorful saison rich with floral herbs and touches of oak.

As Stone rode the wave of great tasting beer and success in the craft industry it struck me as admirable the way the company chose to use that success. Very present in their local community Stone regularly makes philanthropic contributions to local nonprofits and charities amassing more than $3 million in donations.

Serving as a model for ethical business practices Stone often champions and helps prop up its competition in favor of the creativity and innovation that sparks from business rivalries. To top it all off Stone Brewing Company is a strong advocate for the environment and sustainable business practices. Its Escondido World Bistro and Gardens has been recognized with multiple awards for its responsible environmental impact.

Its no question Stone has a solid lineup of innovative pale ales combined with a steady stream of fresh collaborations and experimental seasonals. This all mixed with a company who uses its star power for good to give back to the community, the environment and the craft industry make Stone Brewing Company a top choice at any liquor store or taproom. Whether you are new to the craft beer world or in your college years just coming of age kicking back with a pint of Stone is the perfect place to start.