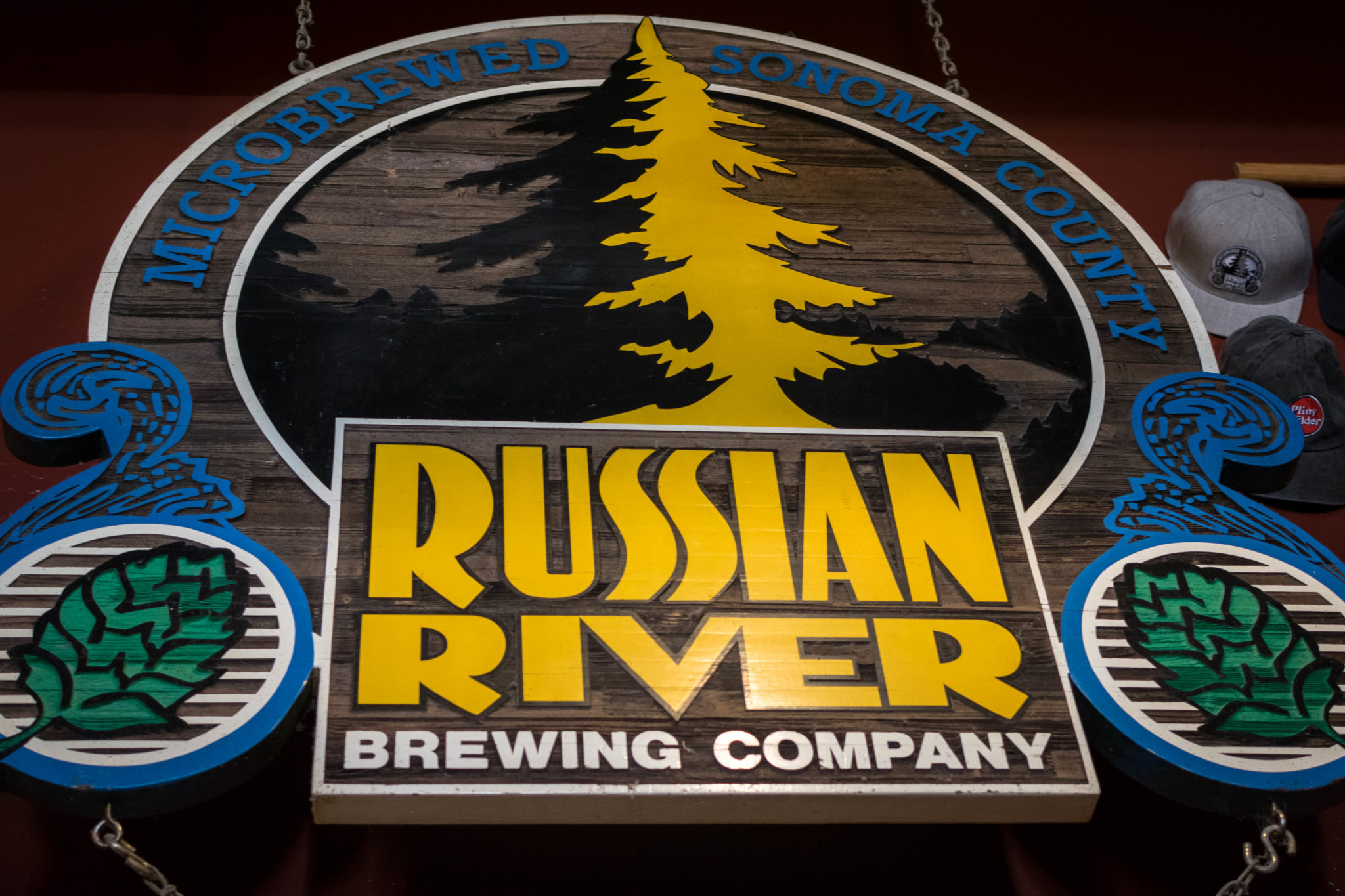 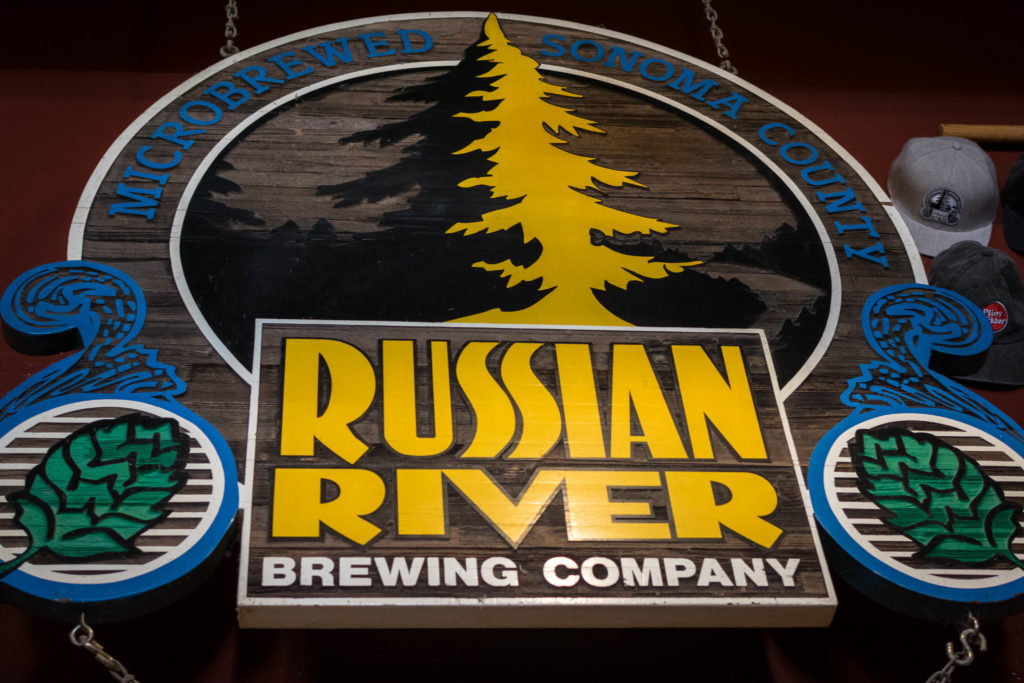 It was a typical sunny California afternoon. Clear blue skies, sunshine rays glinting off the windows of shops in downtown Santa Rosa. A light breeze rustled sidewalk shrubs making the warm day all the more pleasant. Only a week ago the scene on this same street was a much different one. Blue skies were blocked by smoke and haze. Shops were shuttered and abandoned. Shrubs and trees were in danger of becoming tinder and kindling. Rocked hard by a stint of out of control wildfires, Sonoma County was left reeling. Now with fires extinguished and recovery underway the people of Santa Rosa were struggling to return to a sense of normalcy.

The Love In the Air is Thicker Than the Smoke. I read the small sign plastered on the window of Russian River Brewing Company as I pulled the door handle. One of the region’s top breweries and with a nationwide cult following, Russian River was also a major fixture in the local community. Despite it being early in the afternoon the brewery was already crowded. I met Mike up behind the bar standing under a long chalkboard of Russian River offerings. 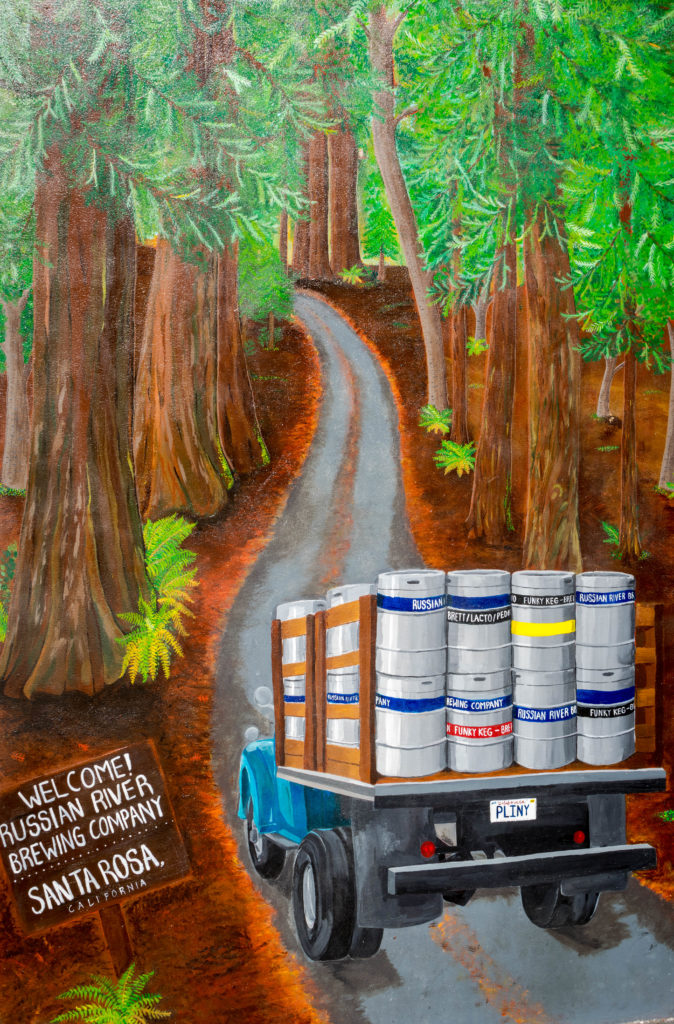 Like much of the rest of Sonoma County, Mike had spent the past two weeks in uncertainty. Frequent evacuations, and news of the fates of friends and neighbors the only thing on his mind. The taproom was abuzz with talk of the devastation, the stories of survival, and the relief that the community could finally come together to grieve, rebuild, and support one another.

Winds and fast moving flames had caught the people of Santa Rosa unawares. As the fire moved west embers the size of baseballs flung themselves across Highway 101 setting eastern neighborhoods alight. Burning whole blocks to the ground.

“No one thought it would just jump the highway like that.” Mike said, still in disbelief. “It’s not like it was a rural community up in the woods or something.” he added. “They were concrete blocks, all cement and asphalt.”

With each overheard conversation in the taproom there were tales of heroism and resilience. Neighbors running door-to-door, waking people from their beds, warning of the approaching flames. A local area firefighter who continued to battle the blaze even after learning his own home had been burned to the ground. As the conversations continued the sense of community in Santa Rosa was overpowering. There was an energy in the air. You could feel the pride, the support, the love people had for one another.

“There’s been so much support.” Mike said of the community. “We’ve had a lot of staff here affected,” he said, glancing around at the bustling taproom. “It’s good that things are getting back to normal.”

Filling up a set of tasters for me Mike went on to share Russian River’s effort to help get people back on their feet.

Sonoma Pride, the brain child of Russian River’s Natalie and Vinnie Cilurzo in 2015, was created to celebrate Sonoma County with limited annual beer releases. After the fires the Cilurzo’s revived the Sonoma Pride name lending out the licensing to any brewery, free of charge. The one caveat was that all proceeds from beers brewed under the name would go towards their partnership with the Kings Ridge Foundation to donate to the victims of the fires. 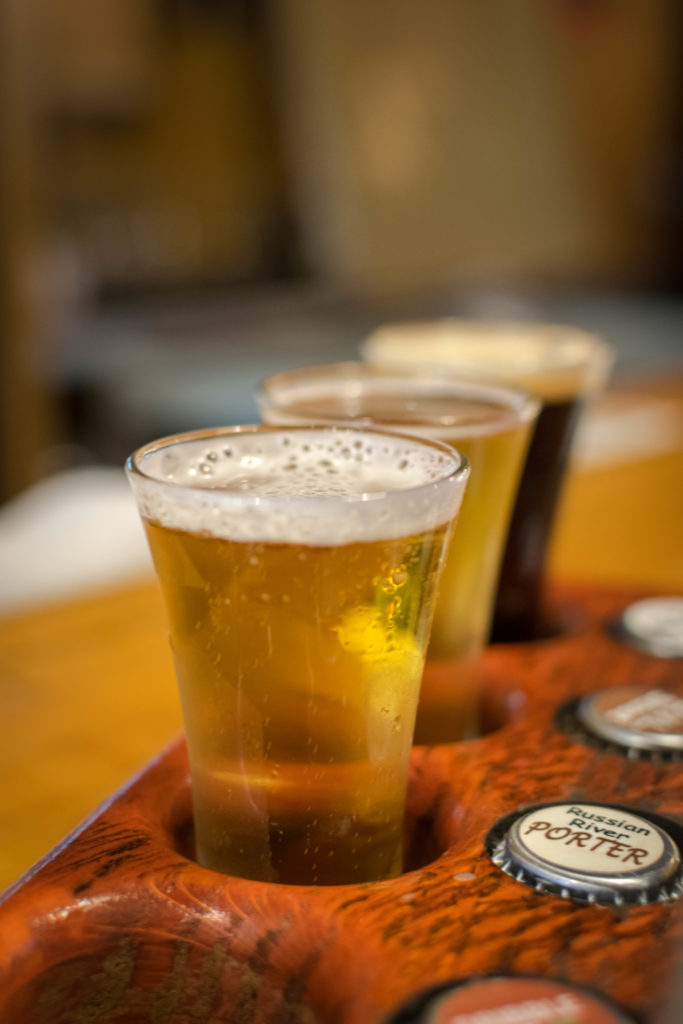 “It just made sense.” Mike said of the Sonoma Pride revival. “We’ve raised so much and so many other breweries have jumped onboard in such a short period of time.” he smiled, “It’s really amazing.”

So far up to 65 breweries were signed up to brew up their own special versions of Sonoma Pride.

“We really didn’t expect it to take off like it did.” Mike added showing me the list of participating breweries so far. “It’s great that it’s getting so much attention.”

I read down the names; Ballast Point, Deschutes Brewery, Sierra Nevada, Karl Strauss, Bear Republic. Breweries all over California and as far away as Georgia were all rallying to the Sonoma Pride call.

Sipping on a taster of the hoppy and legendary Pliny the Elder, the emotion of the whole situation was overwhelming. I came into Russian River and was immediately struck by the strength and camaraderie of the people of Santa Rosa. Now I found myself overcome by that same sense of support across the entire craft beer community. With the first taps of Sonoma Pride to start flowing at Russian River on October 31st I knew it would be an emotional and triumphant occasion.

For all the destruction, the heartbreak, tragedy, and loss nothing was more uplifting than seeing communities like Santa Rosa and the larger craft beer community coming together to help pick up the pieces. The humanity, compassion, and strength burned stronger here than any fire. As I left Russian River I caught sight of a smaller sign.

From the Ashes We Will Rise

I knew they would. 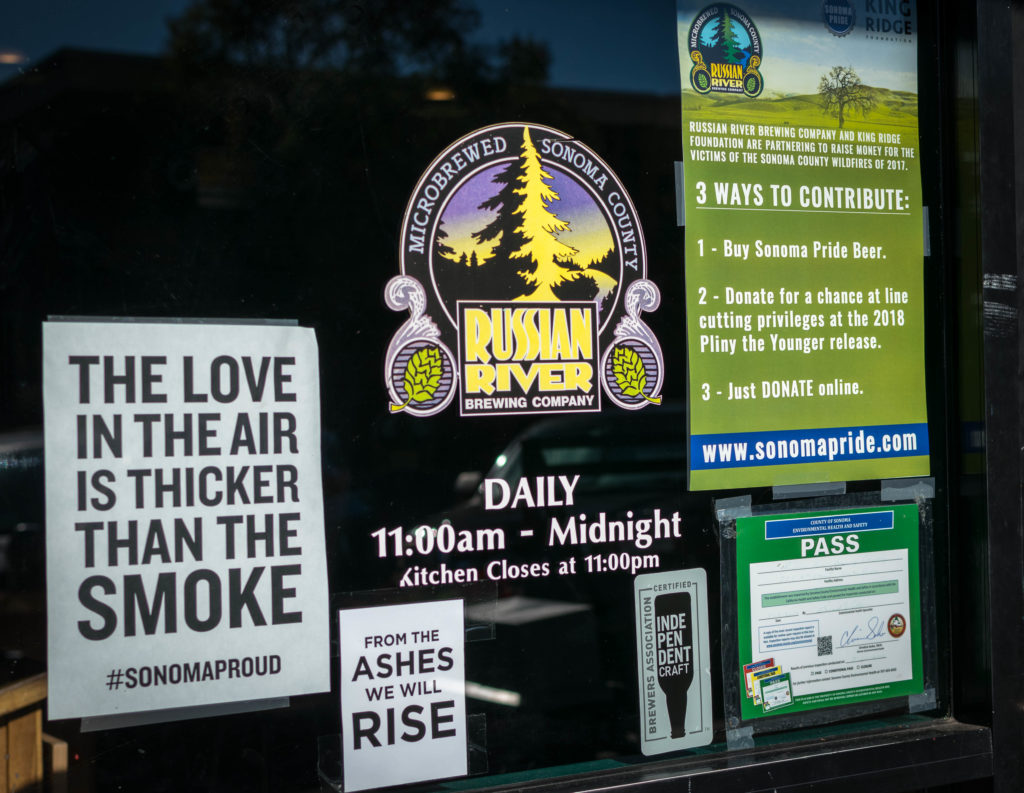 To learn more about Sonoma Pride and the King Ridge Foundation as well as ways to donate or contribute to victims of the Sonoma County Wildfires please visit www.sonomapride.com.