I drove along Lake Shore Drive. Looking out to the east the sun sent beams of light down onto the surface of Lake Michigan. Bright white shimmers glistened off ripples in the water. I felt a gentle breeze through the open window as cool winds rolled westward off the lake. Following the wind and looking west towards the Chicago skyline was impressive but the view east in the direction of the lake was dominating. It rivaled that of looking out on any of Earth’s great oceans. A forever expanse of water, I was encapsulated with the sheer scope of it all. As a first time visitor to Chicago I got a sense of that draw that long time residents feel towards the water. The captivating effects of the Great Lakes.

Traveling west from the shores of Lake Michigan I exited my car and walked down a narrow alley. I scanned each door worried that I would inadvertently bypass my destination. When I came to a blue door with black block lettering I knew I had not missed what I was looking for.

I hesitated as I stepped inside, the door swinging shut behind me the sight before me wasn’t what I was expecting and for an instant I thought I was in the wrong place after all. I had stepped right into the production of Lake Effect Brewing Company. Shiny chrome barrels crowded the majority of the small space. Pallets of packaged brews lined the walls while rows of aging beer stood at attention in wooden barrels. A friendly face greeted me and beckoned me further into the brewery, assuring me that I was welcome.

He introduced himself simply as Clint. The brainchild and driving passion behind Lake Effect Brewing Company. He brought me over to an area reserved for visitors to the small Northwest Chicago brewery. Next to a small counter a refrigerated case stood, Lake Effect’s bottled creation all lined up behind its glass doors. To the side, shelves of brewery branded merchandise, t-shirts, pint glasses and stickers. 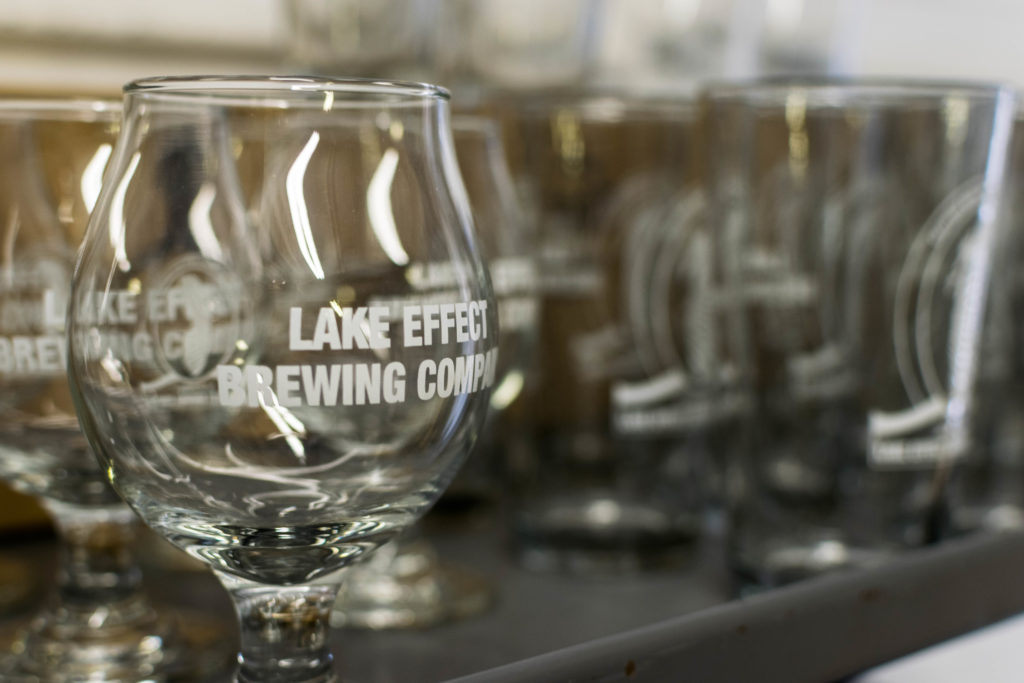 “Come, come.” Clint said, waving me closer to the cold case. He positioned himself behind the little counter. “What’ll you have?” he asked spreading his arm towards the rows of bottles like a merchant hocking exotic wares.

As I looked at the selection Clint moved from behind the counter and wheeled over a pallet topped with four kegs. Priming one of the taps he filled a small plastic cup and handed it to me.

“This is a good place to start.” he said with a smile. “Its one of our most popular.”

The golden and amber hued beer was none other than Lake Effect’s Bitchin’ Blonde. Aromatic and fragrant it was full bodied and complex. Spicy Saaz hops mingled with flavors of coriander and orange peel to make a well rounded and drinkable Belgian style ale.

“You gotta try this one, too.” Clint said excitedly, moving to the refrigerator. He pulled forth a bottle with a maroon label and popped the top.

Brett Frambois poured bright red in color and utilized Brettanomyces, a special genus of yeast with a trade off of a longer gestation period with enhancement of flavor. Sweet and tart it bursted with raspberry flavor intensified even further by the Brett yeast. Clint gestured over my shoulder.

Behind me another member of the Lake Effect team was busily pureeing raspberry inside of a large blender. “We get them fresh shipped in from Oregon.” Clint added as I watched the whole process. Complimenting his choice of ingredients he moved again from behind the counter. 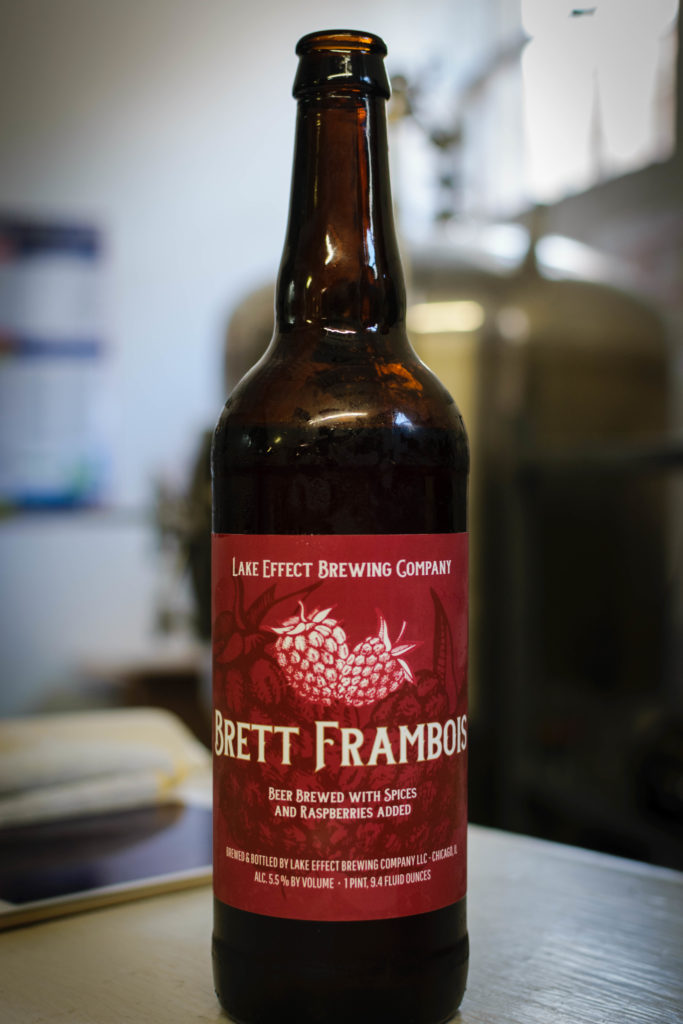 “Check this out.” he said pointing up above the cold case at a map of the Great Lakes.

“I call it the Inland Seas Series.” he added still staring up at the map. “We run eight seasonal beers for different locations around the Great Lakes.” he pulled open the refrigerator yet again. “Each beer tries to capture a sense of that place it represents.” he continued, grasping another bottle by the neck. “We try whenever we can to source ingredients for that beer from the location its named for.” he set the bottle on the counter and reached for an opener. “Give this one a try.”

Lake Nipigon Wild White Ale is another Lake Effect brew utilizing the power of Brett yeast. Named for Lake Nipigon a body of water often referred to as the 6th Great Lake just north of Superior the ale is shiny white in color, a nod towards the pure waters of its namesake. The wild Brett yeast took my tastebuds for a ride yet again. A dry hopped wheat ale with well rounded and complex flavor all evenly balanced and extremely drinkable.

I followed Clint’s finger across the map as he chronicled the brewery’s journey across the Great Lakes. It made me long to return to the brewery each season to sample each of the region’s namesake beers. As Clint described them I craved a taste of the Lake Erie Imperial Brown Ale, a cereal base of malts and oats mixed with fresh sweet maple syrup sourced from the farms around the Lake Erie.

Another stand out was the Niagara Falls Barrel Aged Imperial Oatmeal Stout. A rich and dark beer full of a heavy body meant to symbolize the power of the falls. A nod towards the brave souls that would tumble over the great cascade in wooden barrels the stout is aged in bourbon casks for an extra kick of flavor. 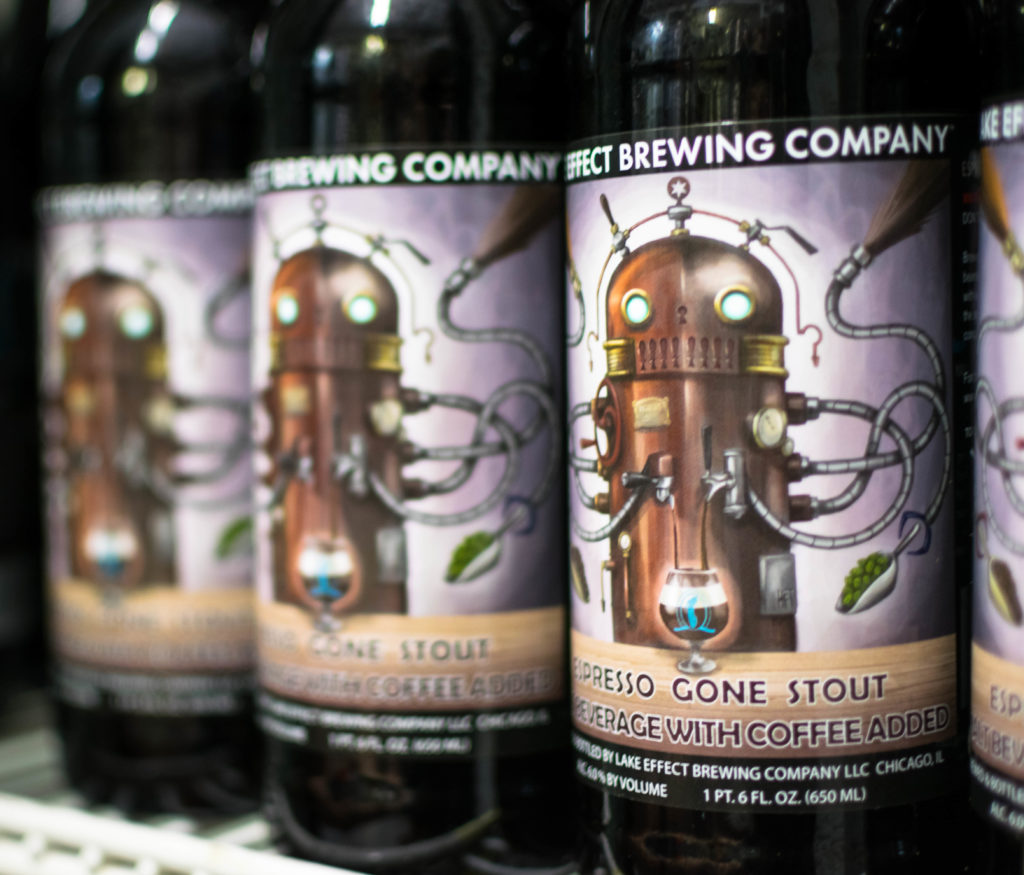 Again I felt the draw of the Lakes. The allure of their waters. The captivation of their shores.

I felt the Lake Effect.