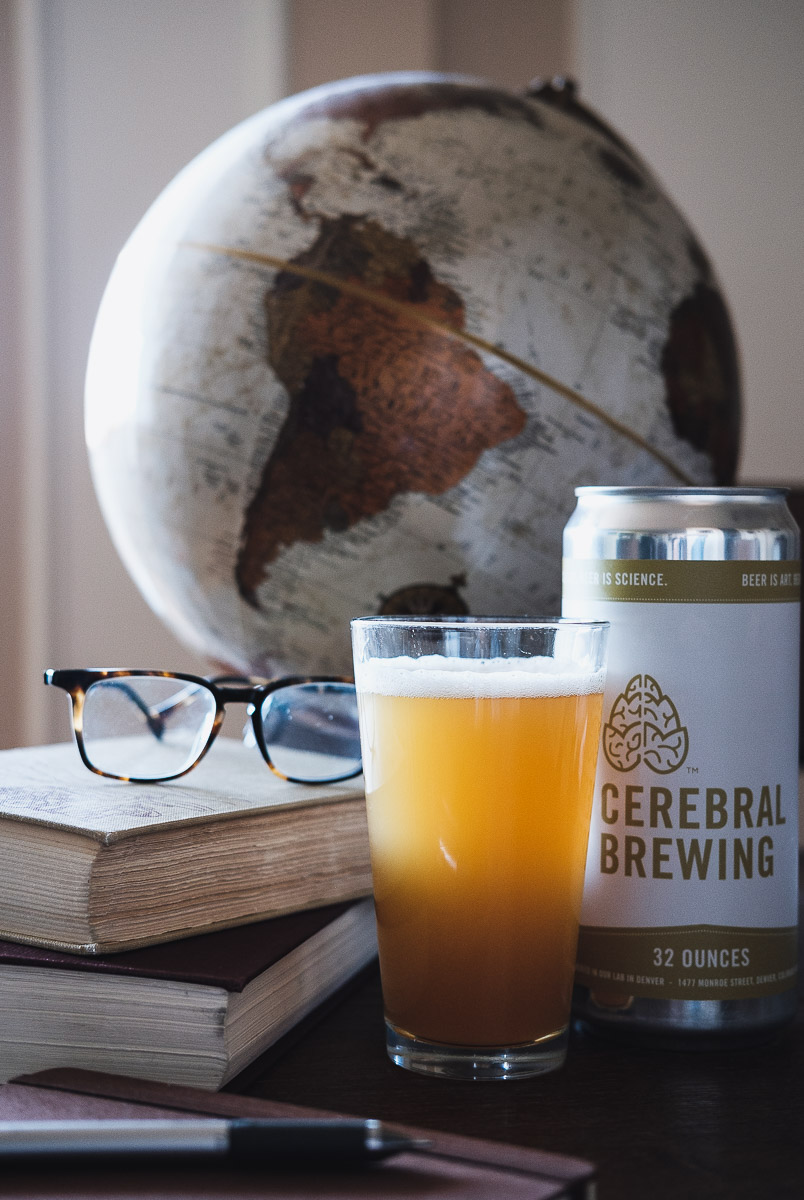 It was a cold and overcast winter afternoon in Denver as I crossed Monroe Street. The sidewalk was slick with fresh ice while the white vestiges of the city’s last snowstorm sat piled in solid heaps along the curb. But despite the weather it was an auspicious day, for at Cerebral Brewing Company it was canning day. As I entered the taproom I was met with towers of colorful cans. Bird of Paradise, Action Potential, Forbidden Idol. Each can with its own intriguing name but all of them emblazoned with Cerebral’s eye catching logo, a mash-up between a hop and the human brain. From between the high pallets of cans emerged founder, head brewer, and the literal brain behind Cerebral Brewing Company, Sean Buchan.

As Sean greeted me and led me away from the canning operation I took in the always eclectically rich Cerebral taproom. Shelves lined with beakers, test tubes, potted succulents, formaldehyde filled jars, and all manner of scientific books and medical tomes. In the corner, standing at attention was an anatomical human skeleton dressed down in a Cerebral t-shirt while high center tables were inlaid with petri dishes and the walls themselves plastered with paper depicting illustrations straight out of an old botanical textbook.

Making our way to a far table I continued to take in the atmosphere and couldn’t help but ask Sean where the inspiration came from. Having his start in the medical field, Sean had previous worked in physical therapy before finding his passion in homebrewing.

“My wife, so many of my friends studied or work in medicine.” he said, “Yeah, you could definitely say that has inspired Cerebral’s theme.” he added, looking around the taproom.

“Want a beer?” Sean asked.  I could feel my face light up and it wasn’t long before I was cracking open a fresh can of Double Dry Hopped Action Potential.

Brewed to perfection with plenty of oats and the delicious combination of Galaxy and Citra hops, DDH Action Potential is a juicy and smooth IPA worthy of its shiny new can. Another hoppy and hazy home run creation from Cerebral Brewing Company.

Cerebral has a tasty lineup of brews across all styles and genres of craft but it’s arguably their extensive offering of hazy style IPA’s that remain most popular. I asked Sean what got him started gravitating towards the hazys.

“Ya know,” he said with a laugh, “For all the craft beer out here in Colorado when I started brewing I didn’t see much innovation in the world of IPAs” he continued. “I looked back East at what some of the guys were doing out at Trillium or at Tree House.” he shrugged, “I wanted access to styles we couldn’t get out here so I decided to just try a hand at making it myself.”

As I sipped my Action Potential I could say that Sean had more than accomplished his goal. Since I had started coming to Cerebral Brewing Company one of their flagship beers, Rare Trait had become one of my top favorite IPAs in Denver. Balanced, buttery smooth and with an explosion of aroma, Rare Trait mixes notes of tangerine and mango with subtle bitterness and a true hazy character that could easily challenge any IPA back East. 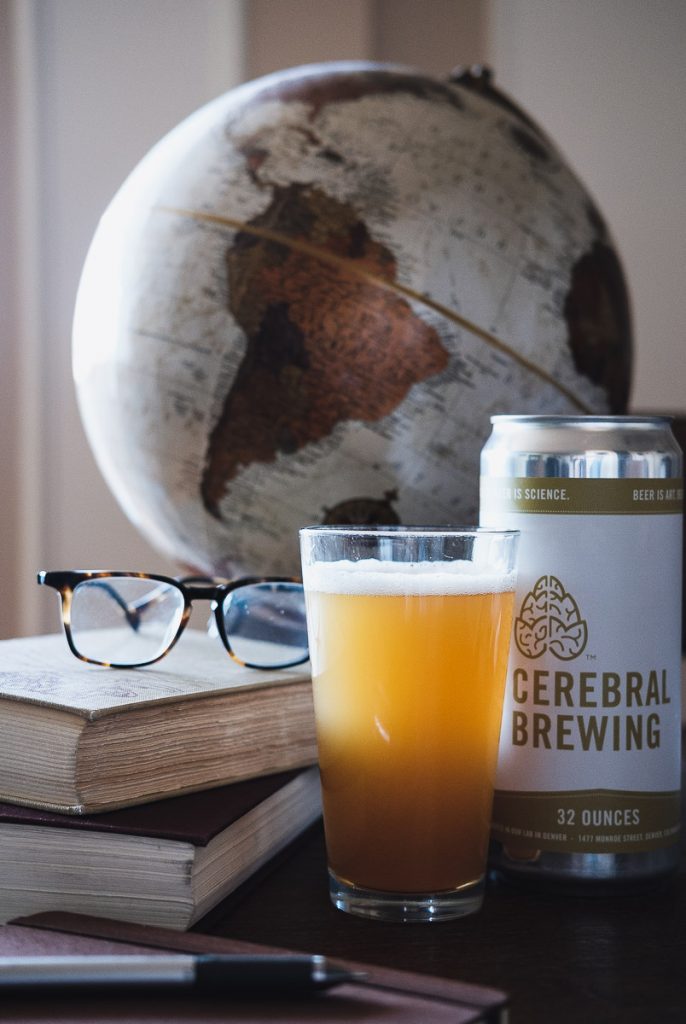 Outside of the world of IPAs Cerebral has ventured into the territory of sours, stouts, and barrel aging. Sean was excited to share the brewery’s recent exploration into the world of lagerbier.

“We’re calling it Character Reference,” he said. “It’s inspired by traditional foeder lagerbiers.  There’s guys out there doing super traditional Old World beer.” he added. “While that can be intimidating we weren’t looking to perfect the traditional or the lagerbier.” he paused and thought for a second. “We just wanted to add a different perspective.”

Character Reference is a homage to a Vienna lager and Cerebral brews it up in the traditional method. Mixing in some Vienna and Pilsner and hopping it up with Tettnang it’s all thrown inside of a foeder, an enormous wooden vat for 6 weeks before being moved to stainless tanks for another 2 weeks. The dedication here to spinning off the traditional is proof Cerebral isn’t all hops and hazys.

Talk turned to the future and the upcoming Horus Hootenanny Festival in San Diego. Hosted by the popular craft publication Hop Culture, the San Diego based brewery Horus Aged Ales and sponsored by Brewery Pak Insurance the festival would see over 60 brewery’s pouring their choicest brews. I couldn’t help but asking for a sneak peek of what Cerebral would be bringing to Southern California.

“Well, we’ll have Ancient Ruins, our latest Imperial Chocolate Stout.” he began the list, “Bird of Paradise, a pineapple and peach smoothie style sour.” he continued. “Forbidden Idol, a new Tiki Sour IPA, which you can see we’re canning now.” he gestured to the activity behind him. 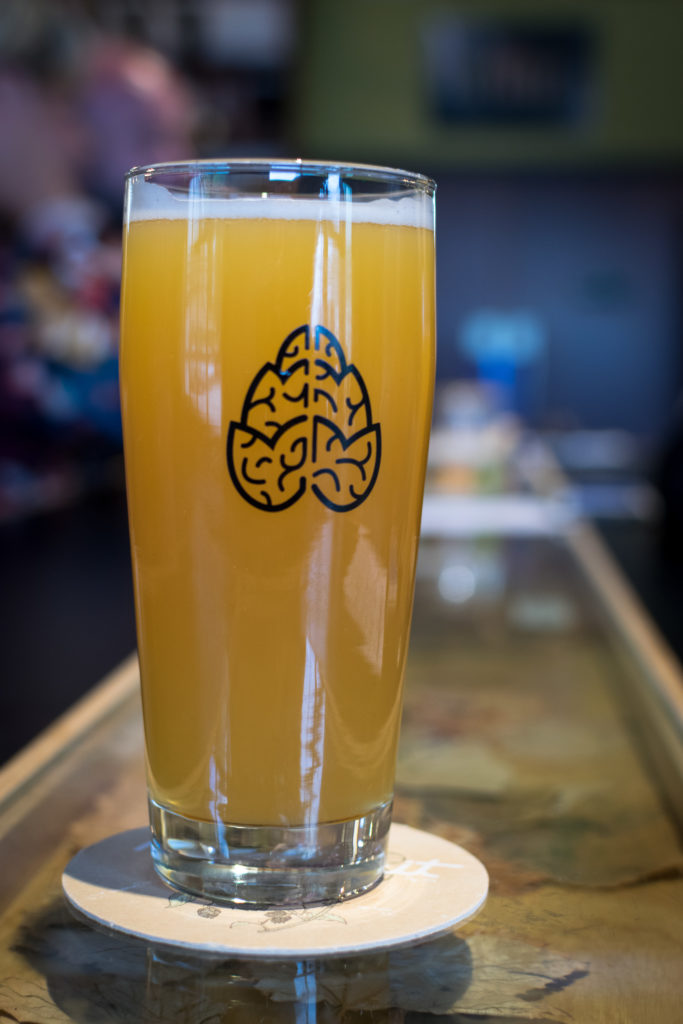 I couldn’t help but ask the story behind this beer.

Hopped up with Citra, Sabro, and Galaxy with a dose of lactose, pineapple and passion fruit puree and finished off with a helping of lime zest I was excited to get my hands on some Forbidden Idol at the upcoming Hootenanny.

Finishing up my Action Potential and with more canning to be done I let Sean get back to the grind before heading back out into the Denver cold. With tropical paradise birds and Tiki bars on my mind my visit to Cerebral definitely took the chill out of the air. I couldn’t wait to add the warm West Coast to the equation and sample some of Cerebral Brewing Company’s latest creations in sunny San Diego.