×
You are here: Home / Hoppy Thoughts Blog / Hopped up on Beer – The Heartbeat of the Great American Beer Festival

As I entered with the throngs and masses the energy in the air was palpable.  Like that of a sports championship, a one time rock concert reunion, a final Olympic rivalry showdown.   I streamed along with the crowds through gated doors, past the security and checkpoints and into the massive heart of Denver’s Convention Center.  People whooped and chattered excitedly as we made our way to the first row of vendors.  The energy then took on the form of fizzing cracked bottle caps, pouring draughts, and tapped kegs.  I was standing in the heart of the biggest event for brewers, beer enthusiasts, amateur home brewers, and hop connoisseurs in the nation. 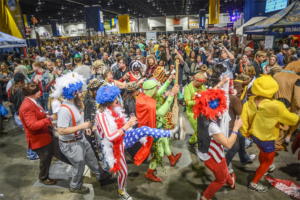 The Super Bowl of beer events.

To call the festival a big deal is an understatement for anyone in the brewery business.  Craft brewers from across the country converge on Denver for three days to offer the best of what they’ve crafted to the masses.  It’s a chance for breweries to test out recipes they’ve been experimenting with and an opportunity for smaller breweries around the country to gain some notoriety.  On the third day the festival culminates with an award ceremony.  In a slew of categories, brewer’s various beers are judged and rated by a panel.  A medal from the Great American Beer Festival (GABF) is the proverbial World Series trophy of the beer world.  To walk away from the GABF with an award quickly puts any brewery on the map.

Making my way through the first row of brewers my tasting glass and map of the Convention Center in hand I was quickly overwhelmed.  The building was crammed with over 800 breweries.  In the four hours I had before the festival closed it would be impossible nor wise to sample a beer from them all.  Looking around I saw many breweries I had frequented before or had purchased their beer in store.  It would be easy to pop around the festival sticking to what was familiar.  Perhaps the biggest draw to attending the festival for the average beer consumer was the ability to sample beers that you couldn’t get at home.  Looking at my map the festival was broken down into geographic regions.  Sections for breweries from New England, the Southwest, the Mid Atlantic, ect.  With 49 out of 50 states represented at the festival I quickly set out on a mission to sample beer from as many states as possible.

Unlike any other convention center gathering that used the term “festival” loosely, the GABF really did have a festival atmosphere.  Brewers set up their stalls in eclectic styles that made the convention floor resemble a circus.  Taps set up out of the back of renovated Volkswagen buses, stalls surrounded by fake aspen trees and autumn leaves, industrial flashing neon signs and shiny chrome counters.  As I turned each corner I never knew what sight I’d be met with next.

The crowd of fellow beer fest goers only added to the ambiance.  People dressed in elaborate costumes, German lederhosen,  ten gallon cowboy hats, and technicolor dream-coats all mulled about on the floor.  I walked past groups of people playing games of corn hole and ring toss.  Folks relaxing around a mock campfire in a tiny circular synthetic forest.  A common theme among festival goers was fashioning necklaces out of their favorite snack foods to eat on the go.  People draped with strings of pretzels and little donuts.  Strands of beef jerky and salted nuggets weighed people down.  As I moved up to get another sample I heard the clatter of plastic on the floor, the sound of someone dropping their 1oz sample glass.  The surrounding crowd let out playful gasps and jeers at the sound.  This would be a common occurrence throughout the night.

Setting out on my cross country beer drinking mission I gave myself no criteria on which beer to sample from each vendor.  Most brewers came armed with five or six different options.  Usually ranging from light blondes and hoppy IPAs to dark lagers and heavy stouts.  I was quickly struck by the creativity and ingenuity of brewers.  I became attracted to sampling beers with the most out-there ingredients.  I tried beer brewed with chili peppers, others with chai tea, cucumber, dandelion, sour cherries, passion fruit, and chocolate milk, basil and jalapeños, watermelon and ginger.  If my imagination could dream up a beer chances are it was already there on tap at the GABF.  Barrel aging was a common trend this year with brewers concocting up beers using wooden barrels from wine or spirits.  The results ranged from delicious sours to warm notes with traces of bourbon and rye.

If the creativity of brewers was not already present in the diversity of ingredients and flavors I was also immediately drawn to the eccentric names they gave their creations.  Lord of the Ryes, Hoptometrist, Dryed Up Old Geezer, Fuggly and Brown,  Wake Me Up Before You Gose, I found myself compelled to try a beer before even learning what was in it just based off of its bizarre name.  Standing in line to try a Russian Imperial stout that caught my eye two guys behind me began reminiscing.

“It gets bigger and bigger every year.” said the first, a string of Slim Jims around his neck.

“I know!” said the second, “I don’t remember half this stuff from last year.”

The conversation was cut short by the distinct clatter of plastic from the rear of the line and everyone let out a loud “Oooooohhhh!” as the person stooped down to pick up their tasting glass.

It could have been all the beer talking but thinking back to last year’s festival I agreed with his sentiment.  More and more festival sponsors had set up shop.  Hosting their own booths for perusal.  Carhart had set up out of a silver and steel trailer, Hydroflask erected a pop up shop within the avenues of brewers.  There was even a full fledged bookstore in the center of the floor.  All manner of tomes from coffee table beer books to home brewing recipes and tips.  The craft beer industry was growing and I was standing in the epicenter of all that effort.

As I moved from state to state the festival started to wind down for the night.  As breweries ran out of their most popular brews more and more of the wacky names would be crossed off menus.  Despite another night of the GABF coming to a close I noticed I never really stopped riding that high of energy from the beginning of the night.  I felt a part of an amazing community of pioneers and creators, people who have been perfecting a centuries old craft with new ideas and innovations ensuring the age old concept of beer brewing would never grow stale.  The industry was thriving and the festival was proof it brought out the best of what people could imagine.

Denver is host to a slew of noteworthy events and celebrations but none quite combines the fun energy, creative entrepreneurship, and deliciousness that is the GABF.  Whether you are an aspiring brewer, a self professed beer snob, or just someone who appreciates a really good pint then add attending the Great American Beer Festival to your bucket list.