×
You are here: Home / Hoppy Thoughts Blog / Founded With Passion: A Flight of Success at Founders Brewing Company.

Founded With Passion: A Flight of Success at Founders Brewing Company. 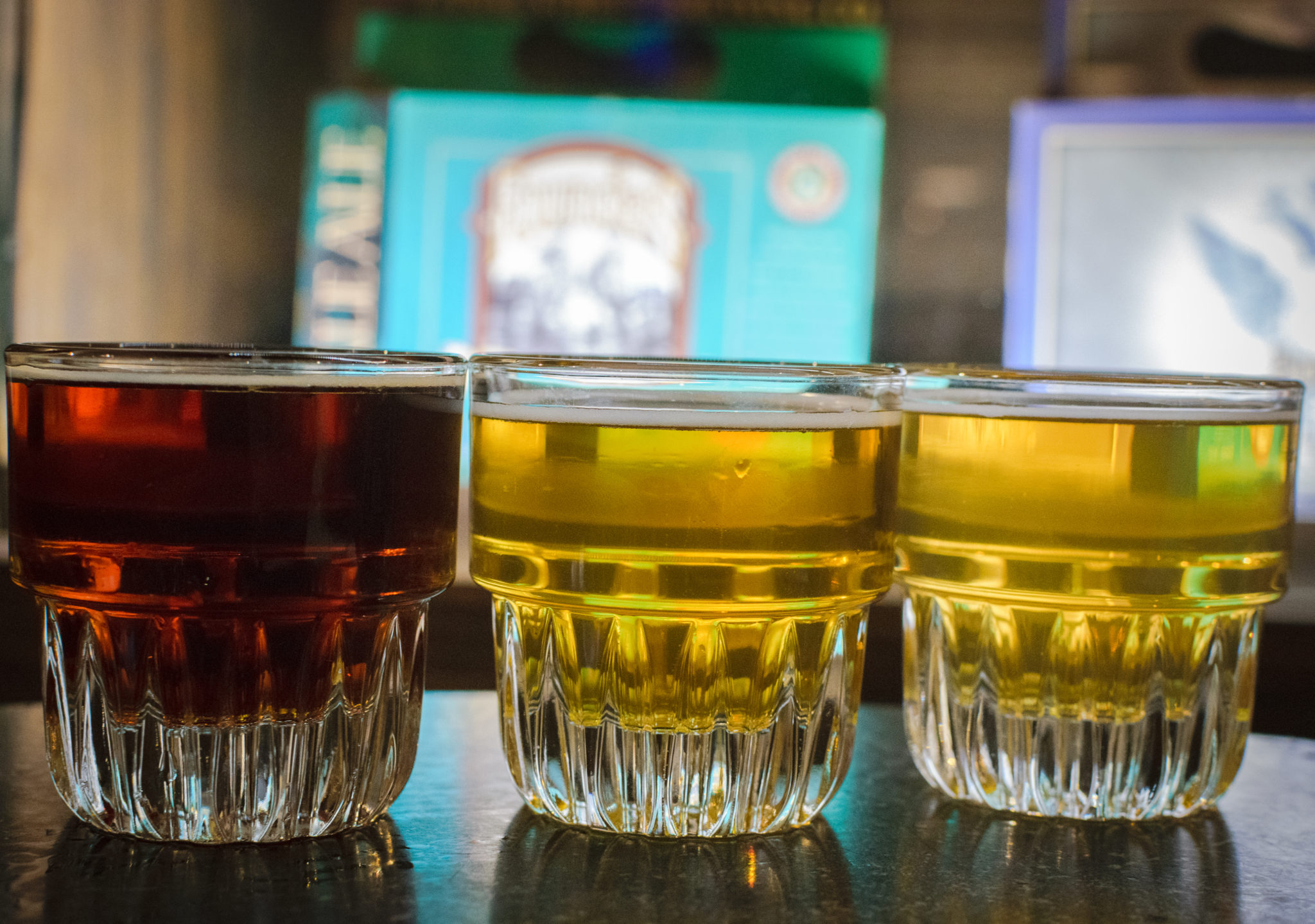 “Don’t worry! I’ll come and find you!” Page shouted across the bar over the din of music and the loud chatter around the taproom.

Having just placed my order at the bar I looked around the crowded room. The space was packed with a crowd of socializers and drinkers all excitedly clamoring while music poured from the speakers above.

“How?” I asked, shouting back. Realizing seats at tables, the bar, or otherwise were hard to come by.

Page laughed, “Relax, its not that busy. Go find a seat.”

I could only shrug and dissolve back into the crowd. If this was a slow night as Page had suggested than a busy one must have had people crammed wall to wall. I came prepared for such an atmosphere, Founders Brewing Company was known nationwide in the craft beer community. Having won multiple awards from the World Beer Cup to the Great American Beer Festival, Founders is listed as a top brewery worldwide and is without a doubt one of Michigan’s premier drinking establishments. 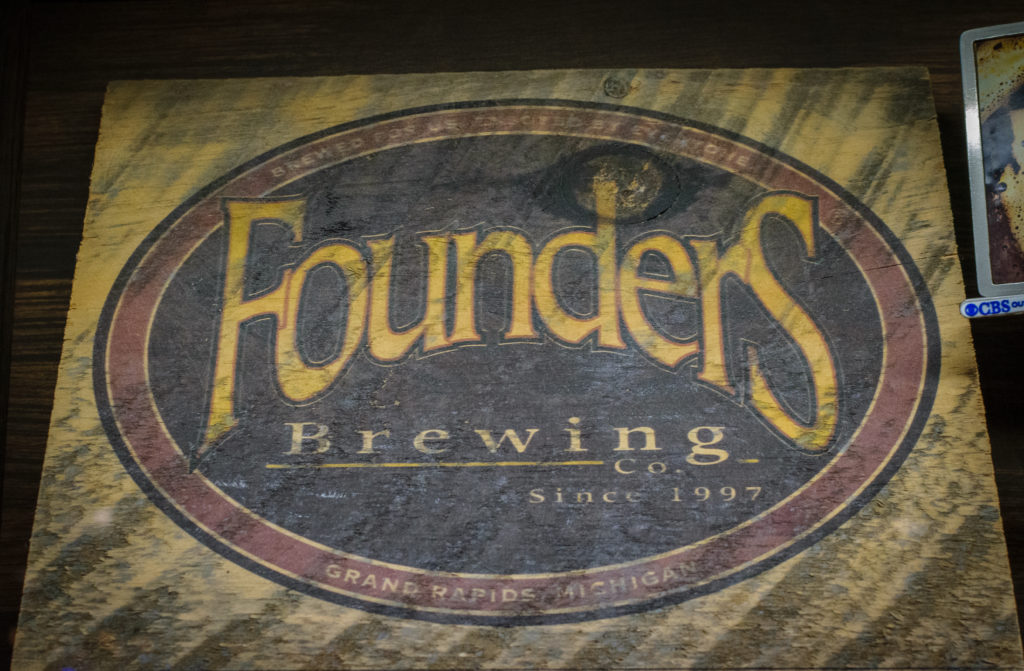 Lucky enough to hop a seat at a small two person table I sat back to wait for my beer and take in the surroundings. The taproom was massive, making this relatively small crowd even more impressive. Hardwood floors were lined with tables and booths. Overhanging shelves lined the walls allowing for overflow crowds to have standing room to place their drinks. Two bars lined each end of the hall, one of them flanking the edge of a large wooden stage reserved for live music and to host many of Founders weekly events.

Tonights event: Open Mic Night, wherein any patron, local or tourist could take the stage and show off their musical chops. I sat back and listened as a middle aged guy in a fedora belted out his best rendition of Ziggy Stardust.

The whole layout and atmosphere of Founders was one that encouraged groups to socialize and enjoy the night out. Not only was the wide open floor plan conducive towards a social atmosphere but Founders also littered their taproom with ways to stay engaged. Whether hanging on the brewery’s patio biergarten, engaging in a game of billiards at the pool table or honing in on the weekly open mic night there seemed to be a separate party going on no matter which way I turned. 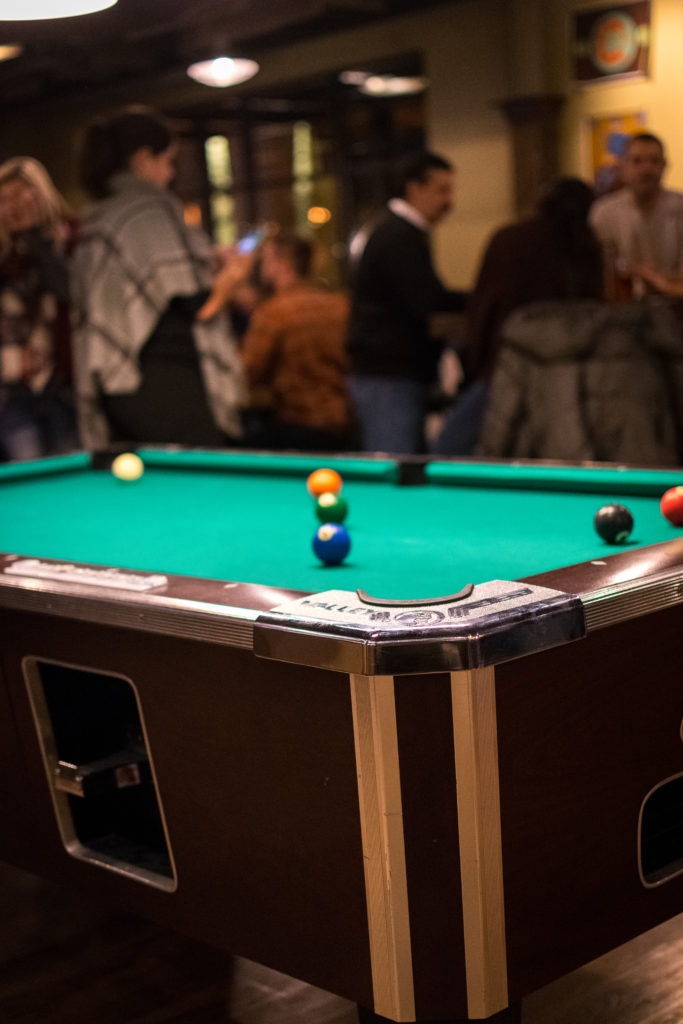 As promised, Page emerged through the crowd and set down a row of beer in front of me. As she turned to head back to the bar she stopped and pointed at the darkest beer in the line.

“This one is my favorite.” she said, and then disappeared into the crowd.

Her choice was none other than the Breakfast Stout. A dark and heady beer brewed with multiple bitter and sweet chocolate and flaked oats. Founders sourced two local coffee shops, Ferris Coffee, and Nut to add a bit of roasted pick-me-up to each pint.

Next up on the list was Founders now famous Session, their All Day IPA. This smooth and highly drinkable pale is masterfully balanced. The complex mix of malts, hops, and grains all come together to make an exceptionally refreshing beer that can literally be enjoyed around the clock.

The Founders fan favorite and company game changer, Dirty Bastard was next in my lineup. A Scottish Ale by nature it is brewed with seven types of malts. This richness combined with hints of smoke and peat give the beer flavorful attitude with a surprising smooth clean finish. On the lighter side, PC Pils is Founders nontraditional take on the classic Pilsner. Breaking from decorum and instead of using the go-to Noble hops Founders went with a combination of Piney Chinook, Cascade, and Centennial hops to make a refreshing and clean beer with explosive hits of floral flavor. 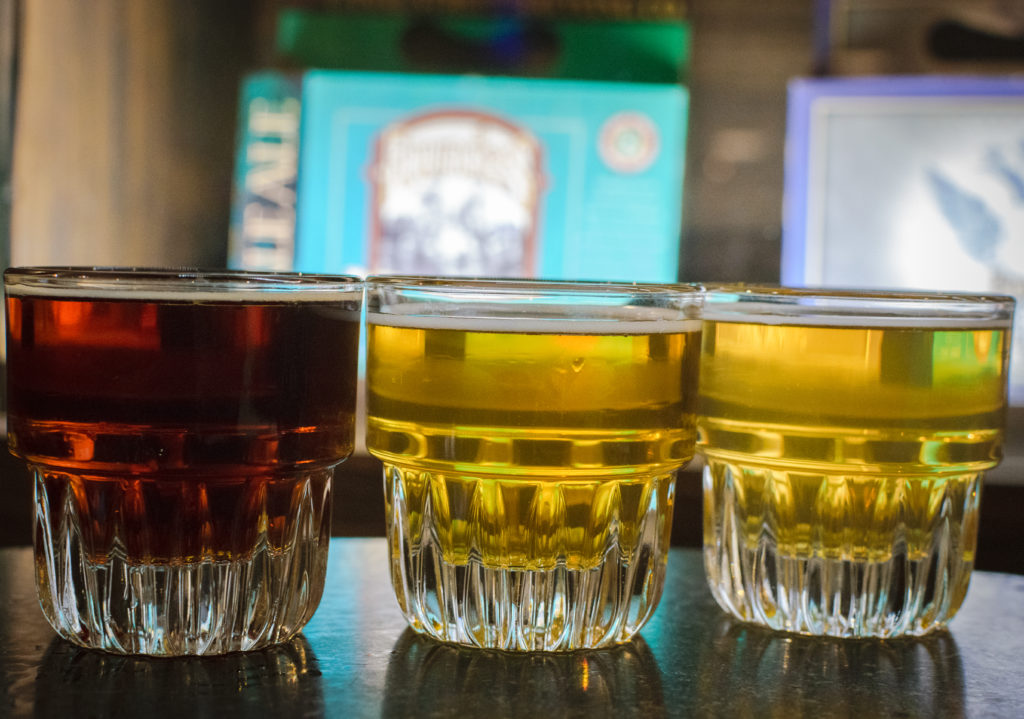 Sitting back and sipping my beer I watched as a grungy looking guy took the stage and broke into the opening lines of Smells Like Teen Spirit. Looking around at the crowd which packed the taproom on a Tuesday, it wasn’t just the lineup of solid good beer that struck a chord but Founders inspirational back story.

Like many breweries Founders was born from a couple of guys who gave it all up to pursue their passion of beer. Starting out in 1997 the company was on the brink of going bust. Their business model failing and their beers underwhelming. With everything on the line the Founders family had a revelation. They stopped brewing the beer they thought others wanted to taste and started brewing the types of beer they loved most. It didn’t take long to realize the beer they loved hit home with their audience.

This tale of success out of failure is a testament to the human spirit and what can be achieved through ambition and ingenuity when people have nothing to lose. Founders wears this rocky start like a badge of honor and inspires craft brewers and small business owners alike. With its beer, company culture, and elatious taproom its no wonder Founders Brewing Company has climbed to become a household name in the craft beer world.