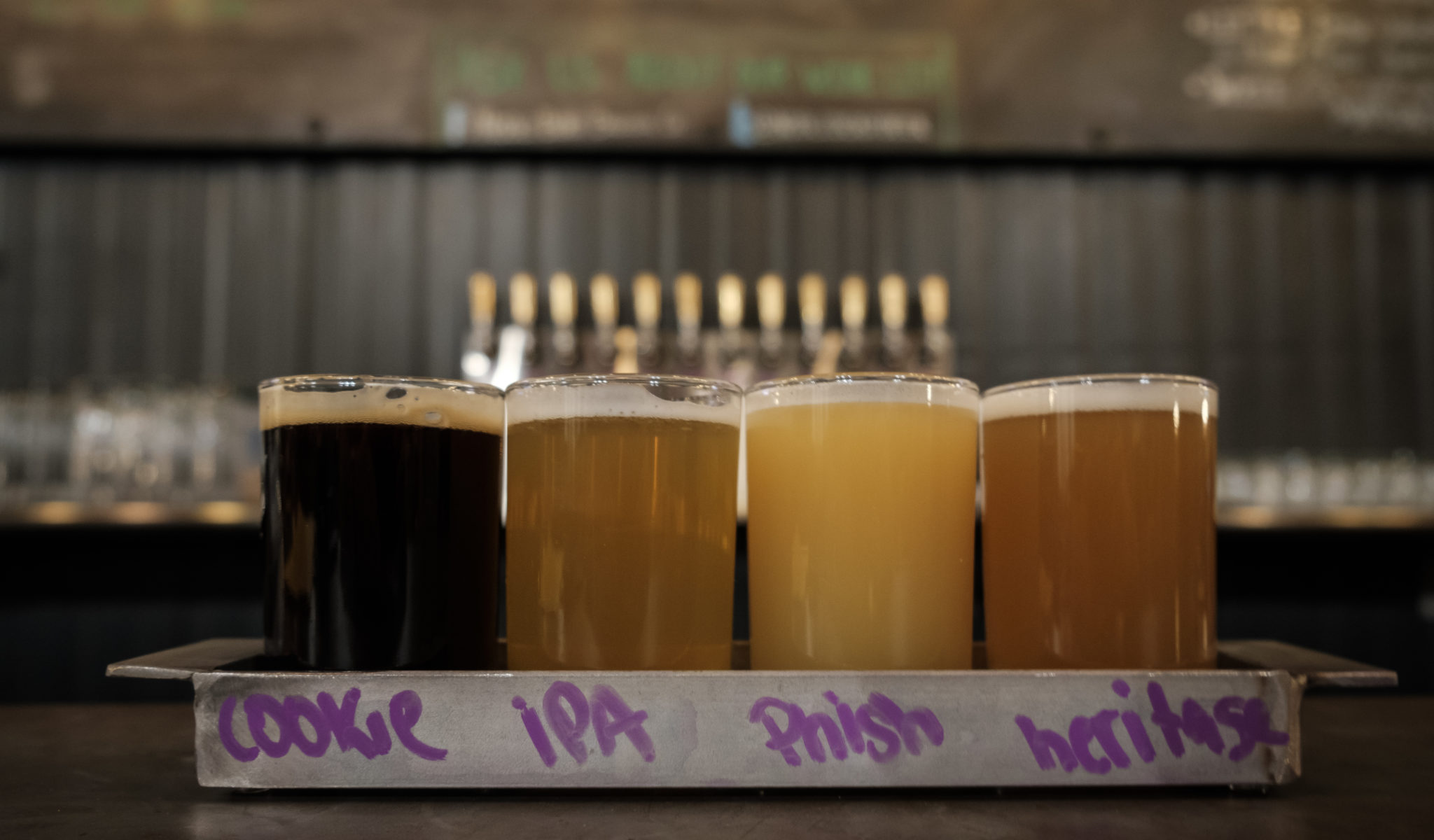 The cold chill of the lake effect weather hit me as I walked through downtown Cleveland. The frigid blast of wind penetrated every layer of clothing and sent a shiver through my body. Only a few miles from the Great Lakes I was eager to get inside and out of the exposure of the Midwest winter. I found my refuge in Noble Beast Brewing Co. Pulling the handle I escaped the cold and entered a warm world of Cleveland craft.

Walking towards the wrap around bar I glanced at the brick and mortar walls, the low hanging bulbs, a short row of fermentation tanks and the shiny red relic of a hanging Kawasaki motorcycle. I found Bill busily moving from tap to tap serving the brewery’s evening crowd. 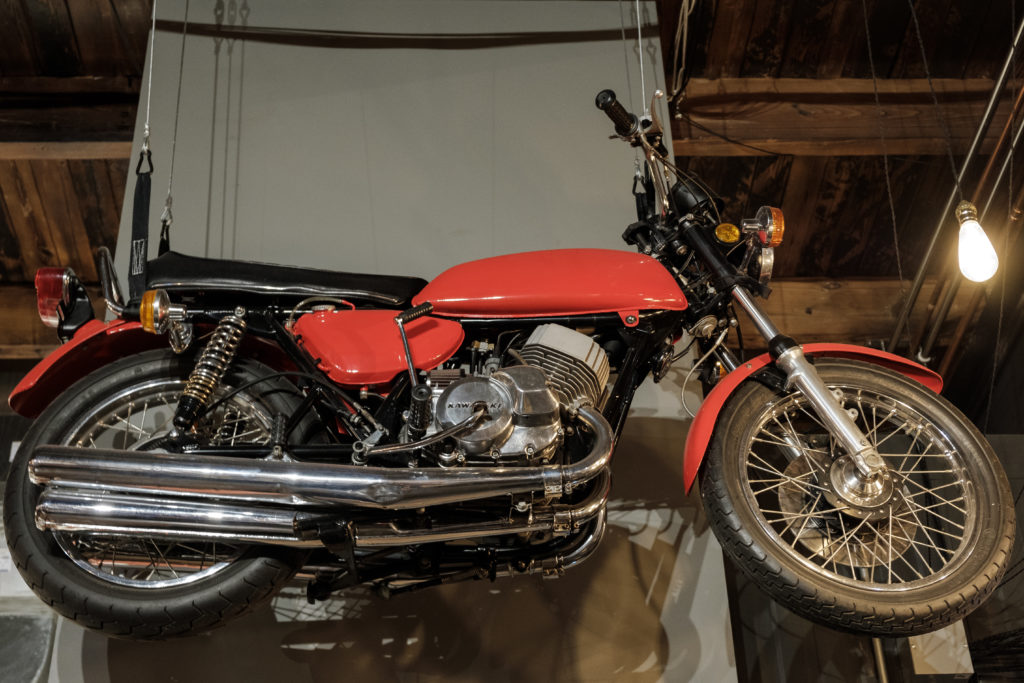 Hooking me up with tasters of some of Noble Beast’s top creations I was looking forward to trying some of what the brewery had to offer as well as something strong to warm me after being out in the cold. Sliding a chrome tray of brews in front of me, Bill filled me in on Noble Beast’s history.

“It used to be old storage for the Cleveland Museum of Natural History.” he said glancing around at the high brick walls. “From there it switched to being a mechanic shop.” I followed his gaze and tried to picture the space filled with boxes of artifacts and oily machine parts.

From these beginnings brewer and visionary Shaun Yasaki acquired the space and Noble Beast was born. An experienced veteran of the craft scene first moving from Fatheads to spearheading the brews at Platform Brewing Co, Shaun reached even further and launched his own brewery based off traditional German styles crossing with explorative American creations. Less than a year old Noble Beast was already turning into a neighborhood hotspot in Lakeside. Eager to taste what all the buzz was about I dug into my flight.

Evil Motives IPA is a Midwest beer brewed in the West Coast style. A dry hopped IPA it is crisp, clean and highly drinkable packing loads of Citra and Simcoe hops. Citrus notes round out a tropical profile with a slightly sweet finish. Local brewing providers, Haus Malts contribute ancient and traditional grains to Heritage Saison. An assortment of millet, rye, oats, barley and triticale make up a backwoods Belgian character while the unique additions of dry hopped Nelson Sauvin hops bring out flavors of gooseberries, grapes and white wine. 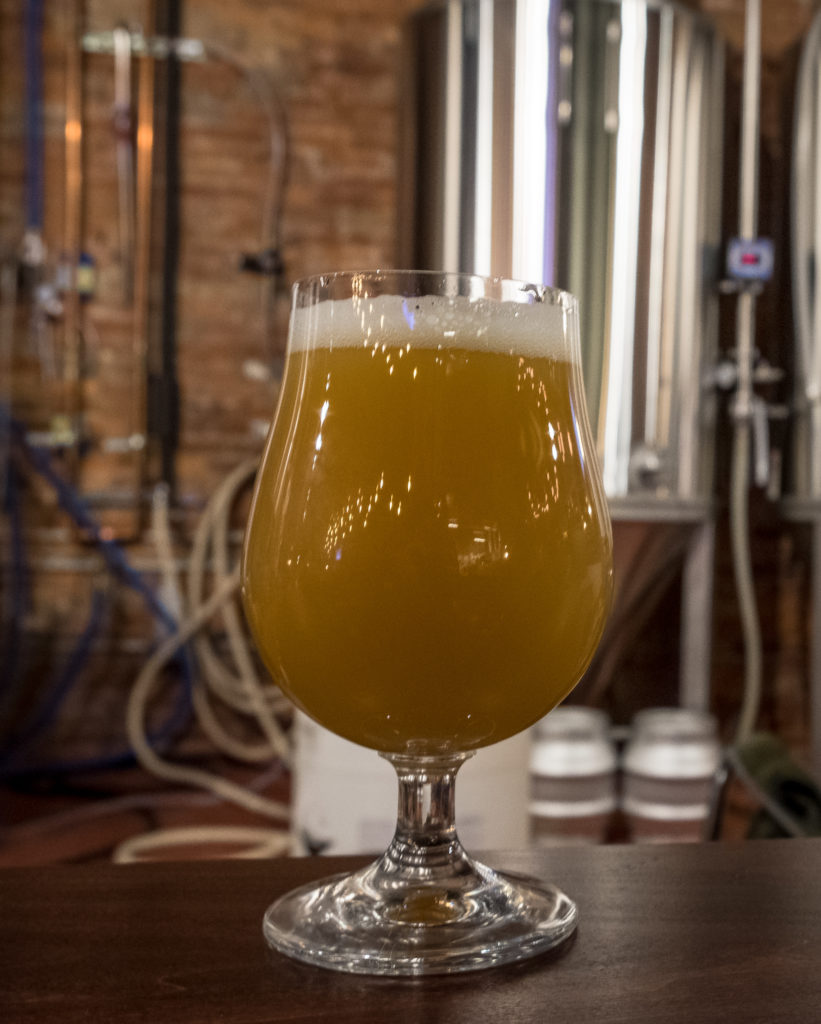 “What’s with the bike?” I asked Bill, pointing up at the hanging motorcycle.

“Shaun is a big bike guy.” he said with a chuckle. “A big hobby and its always been a big part of him. One of his first beers is actually named after it.” he said with a laugh. He went on to tell me about Two Stroke Tripel, an appropriately named IPA inspired by the hanging Kawasaki.

Another cleverly named brew, the hazy Double New England Style IPA is comically dubbed, Generic Phish Reference. Brewed in collaboration with the jamband fans over at Terrestrial Brewing Co. It has all the big tropical flavor, citrusy aroma and dreamy haze you could want out of this popular brewing style. Very flavorful with an exceptional mouthfeel and low IBU’s this one can sneak up on you.

The smooth and creamy Imperial Cookies and Milk Stout is Noble Beasts popular dark brew. Easy drinking for its imperial status it is brewed up with an assortment of sweet treats. Flavors of chocolate, cherries, vanilla, pecans, pretzels, oats, milk and sugar are all present. Light and well balanced while still maintaining malty character and complexity it is like drinking a dessert tray from a pint glass. 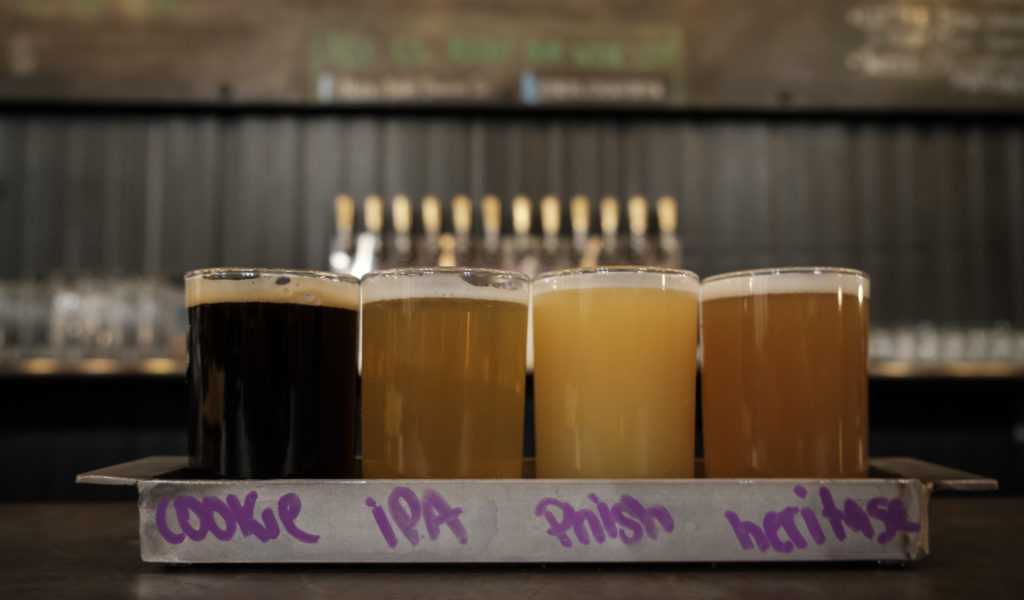 My stomach rumbled and I reached for the taproom kitchen menu. Cheese stuffed kielbasa, pork carnita nachos and smoked turkey and Havarti all graced the offerings, making excellent pairings to Noble Beast’s selection of draft creations.

Munching on some nachos I watched as more people entered the brewery, bringing cold blasts of Ohio winter in with them. I shivered as I watched the icy winds rattle street signs. The Midwest, Great Lakes winter was a beast. With a warm inviting taproom, great food and delicious beer I saw no reason to leave. I’d stay in and brave the Noble Beast instead.