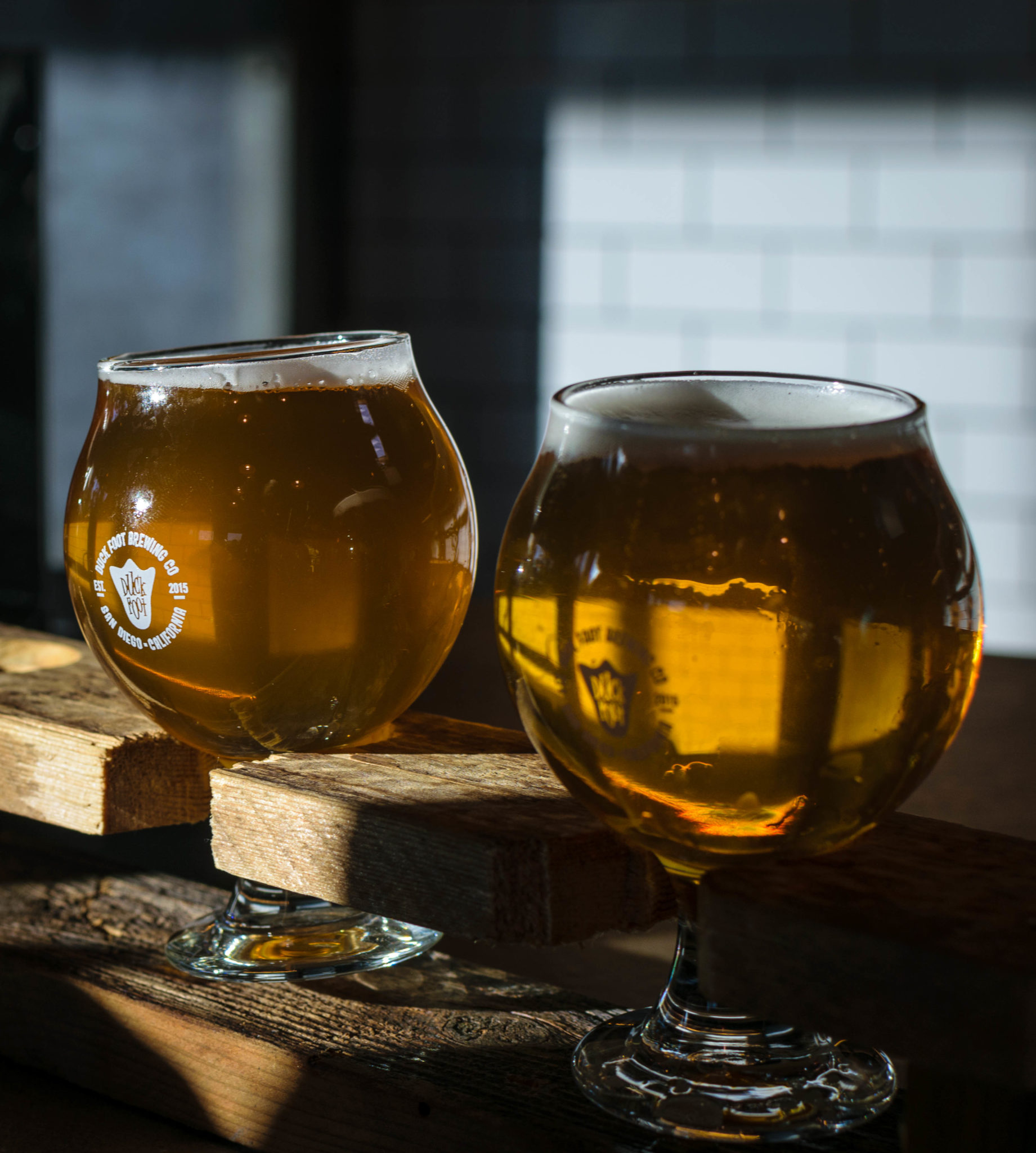 Duck Foot Brewing Company’s bar was cast in a moody light. Looking down at the slab of wood holding my neat row of tasters the warm afternoon sun illuminated each glass from a nearby window. It set the colors of each beer aglow giving them new vibrance. Shiny ambers, crimson reds, and golden hues. I picked up the closest one that caught my eye. 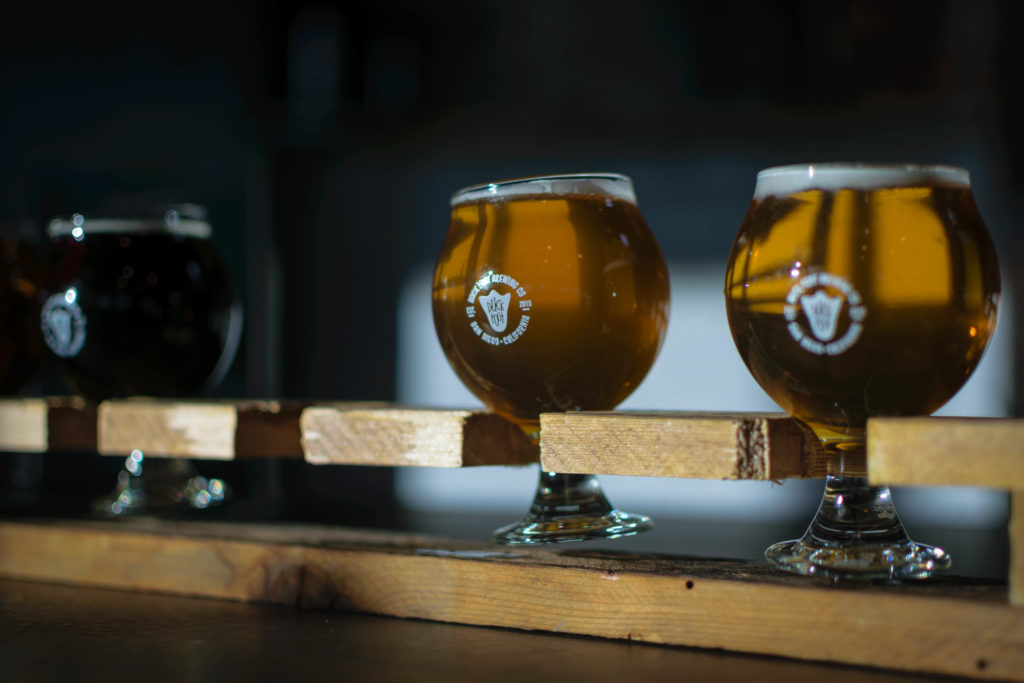 Duckzilla is Duck Foot’s year round power hitter. A double white IPA that packs a bitter punch with a combo of Simcoe, Cascade and Centennial hops. The addition of wheat gave the beer its white shiny hue and added a sweet flavor to the finish. It had all the hoppy flavor of a West Coast Style IPA combined with the light sweetness of a White Ale.

Moving farther into the sweet spectrum is Drink This Or The Bees Die Honey Ale. A past San Diego International Beer Festival medalist this ale is infused with locally sourced orange blossom honey. Sweet and smooth with a beautiful amber color this brew is an all day drinker with a nice crisp finish. In addition to tasting great a portion of all the proceeds generated this year are being donated to the Planet Bee Foundation to help save the increasingly at risk insects.

My gaze followed the rays of light onto the far wall. Wood paneled and adorned with a detailed mural of two Comic Con-esque characters, one clad in a space helmet, another a sharp toothed robot sparred in a giant boxing match. Under them carefully placed tables, stools and counters all lended to Duck Foot’s inviting open spaced taproom.

Eager to try more of what the brewery had cooked up I reached for an ale blood red in color. Rojoe Gringo Red Ale is Duck Foot’s malty exploration into the world of reds. Intense notes of caramel, brown sugar and toffee mingle with English hops to add a touch of earthiness. Picking up the darkest brew on my taster board I took a deep draft of Choco Nut Lust. This chocolate hazelnut porter was packed with flavors of dark chocolate and molasses. The addition of real cocoa nibs and chopped hazelnuts only added to its rich taste. An exceptional dessert beer. 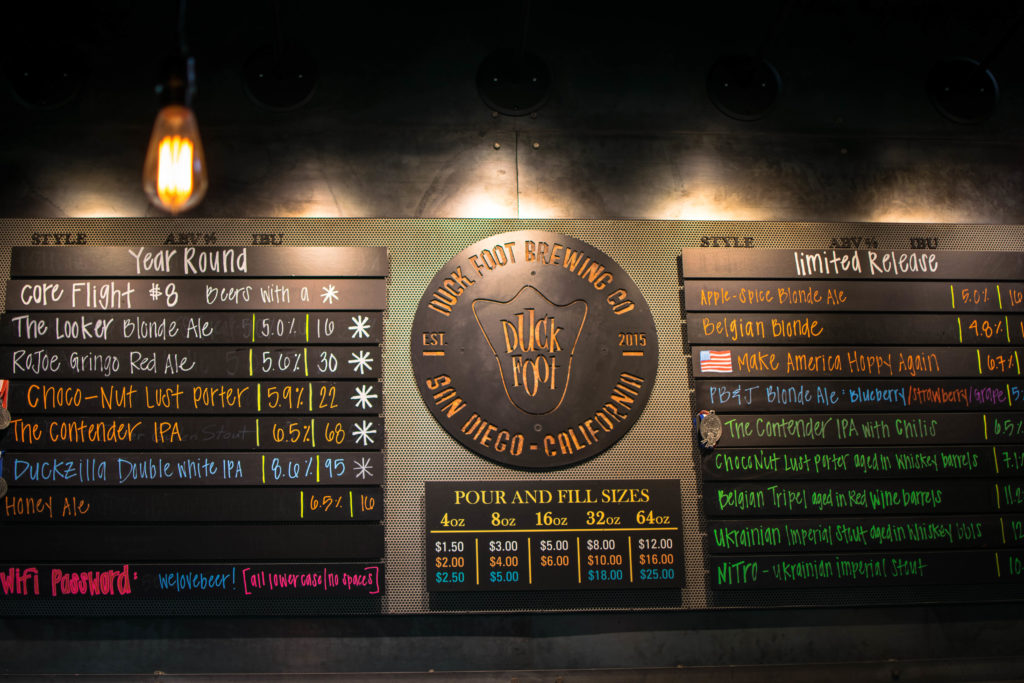 Situated in the popular Miramar neighborhood where there is nearly a brewery on every block, many of them running whole menus of slight variations on the West Coast Style IPA it was refreshing to get something different at Duck Foot. The creativity and craftsmanship put into each beer spoke volumes, Duck Foot could have specialized in any of the beer types they served up. I couldn’t help but compliment the guy behind the bar on the delicious variety on tap.

He laughed, placing a growler up on a shelf over the row of taps. “Can you believe they’re all gluten-free.”

Right there was the impressive kicker. Duck Foot came into being in 2015 thanks to the combined efforts of Matt DelVecchio and Brett Goldstock. Two former New Yorkers with big passion for beer. For Matt there was one big caveat to being such a hop head, a sufferer of Celiac Disease his kryptonite was gluten.

With lots of research, testing, and experimentation the guys at Duck Foot overcame this setback in a huge way. Instead of resorting to using buckwheat or sorghum which often leaves beer tasting watery and lifeless Matt and Brett threw their lot in with natural enzymes.  Spreading in the barley these enzymes attack the gluten leaving only a few parts per million by the end of the process, effectively making all of Duck Foot’s beers gluten free. 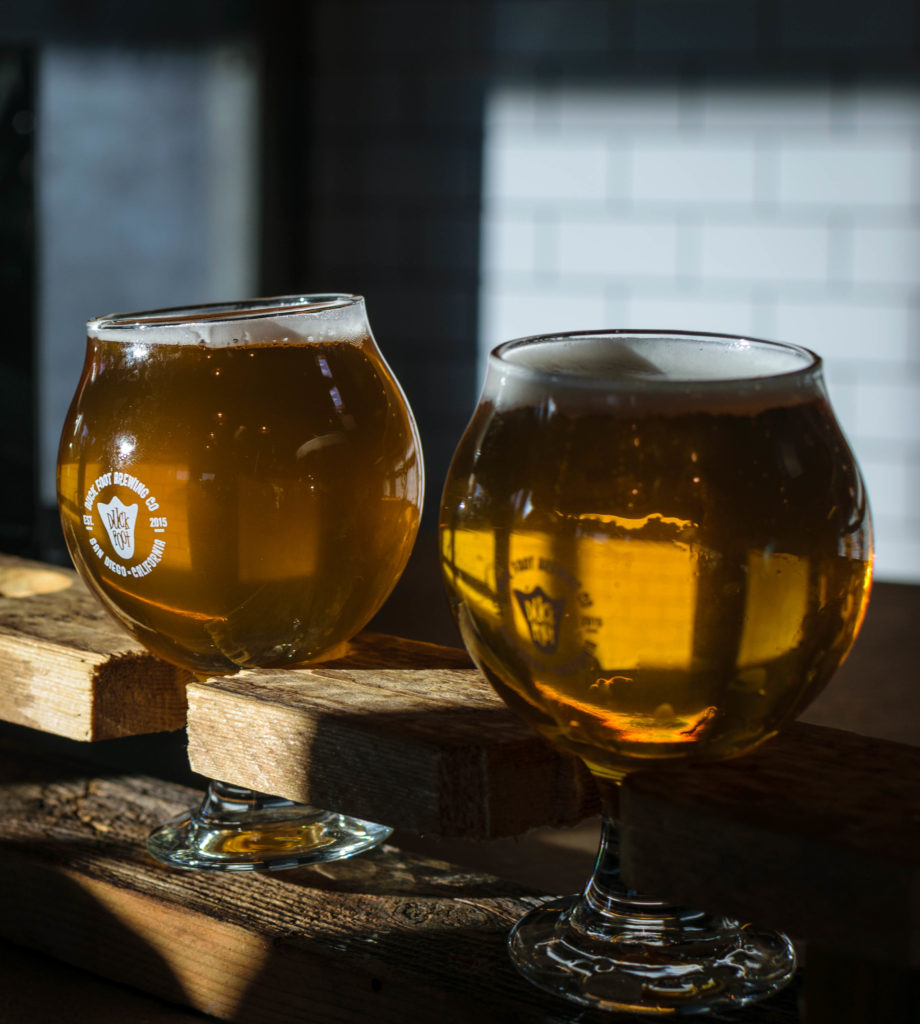 I was blown away by this revelation. Not only had the team at Duck Foot managed to create an entire menu of gluten free beer but they had accomplished this all while not compromising taste or quality. My entire visit to the brewery could have gone by in ignorant bliss, I often scoff when I am handed a beer that is touted as being gluten free but at Duck Foot I would have been none-the-wiser. The flavor was top notch and the innovation and dedication put forth by the Duck Foot crew was unquestionable. Its no wonder the brewery’s beers have won so many awards since its creation.

My time at Duck Foot left me rethinking the way I perceived gluten in the craft beer world. More than that it left me with a new sense of pride being able to visit and taste ground breaking creations from more of the craft community’s most passionate and dedicated minds. Next time I am handed a beer, gluten free or not, if it has the Duck Foot name on it I won’t think twice before filling my glass.