“What can I get for you?” asked the beard clad man behind the bar.

“I heard you guys won gold at the Great America Beer Festival?” I asked.

“Thats right.” he nodded his head gesturing back over my shoulder. I turned my head and followed his gaze towards the far wall. I was met with the sight of a giant mural done in colored chalk. A giant bottle of beer tipped on its side, the contents spilling out and flowing towards the face of a giant overturned wine barrel. “The Great American Beer Festival” scrawled across its face. At the bottom a gold ribbon pinned upon a foamy pint of beer. 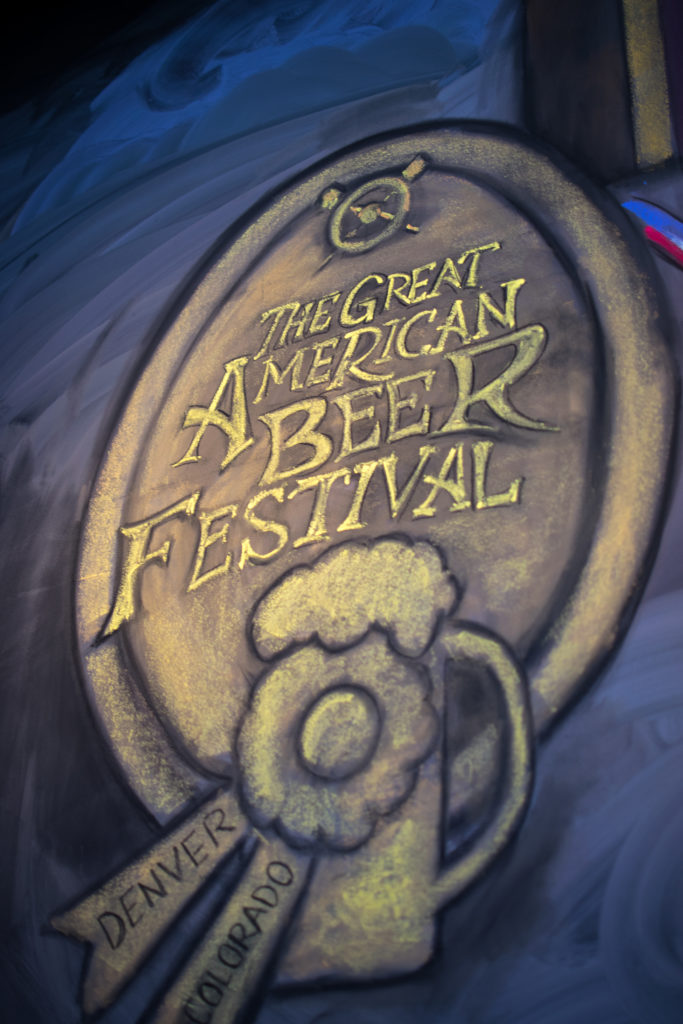 “I’ll take one of those.” I stammered, still looking up at the massive mural.

As he turned to man the taps I looked around the brewery and took in the scenery. Denver Beer Company makes up its home along the banks of the South Platte River, the historically underwhelming waterway that winds its way along Denver’s northern perimeter. As a result Denver Beer Company’s surrounding neighborhood has an industrial past, the brewery’s vibe certainly maintained that theme.

The taproom was large and long with low hanging pipes and criss crossing ductwork. The far wall in which I had been staring at was comprised of a large chalkboard covered with beer themed murals, Drama Queen’s gold crowning among them. Tables and picnic benches comprised the concrete flooring, a row of garage style doors were swung up flooding the taproom with natural light and exposing it to the patio seating beyond. Any available space along the walls and corners was made home to clusters of Napa Valley wine barrels. Despite all the barrels, Denver Beer Co’s brewing was a small operation. They prided themselves on these small batches citing that enabled them to keep things fresh, releasing new and different types of beer monthly.

Taking my flight of sample beers I made my way back to my seat. The table contributed to the industrial theme as it was no table at all, but a large iron machine cog mounted on a stand. A planter of succulents grew from the cog’s central hole adding color to the atmosphere. Aside from being an obvious local watering hole, Denver Beer Co. proudly stated that most of its furniture and décor was repurposed from the surrounding neighborhood.

Diving into my flight of beers I kicked things off with, Summit Sunrise another award winning beer. This one taking gold at the 2016 World Beer Cup for Best Double Red Ale. Toted as a red rye IPA, the beer has all the sweet flavor of a red ale with a nice hoppy bite. Denver Beer Co. attributes its name to the beer’s color. A vibrant golden red reminiscent of a Colorado sunrise atop some high mountaintop. Perfect for lovers of a mid ranged IBU type beer rather than hardcore IPA drinkers, Summit Sunrise is highly drinkable for red ale and IPA fans alike.

On the darker side, Denver Beer Co. has their Graham Cracker Porter. A regular on tap and featured on the giant chalkboard mural wall. The Graham Cracker Porter is packed full of robust flavor with notes of chocolate and smoked cedar shining through followed by a sweetness lended by roasted malts, vanilla and biscuits. Its the closest thing I’ve ever come to actually drinking a S’mores.

Next up the Incredible Pedal IPA is a year long favorite. Denver Beer Co’s brewmasters claim its brewed in the West Coast style with tropical and citrus flavors. Hoppy and light Incredible Pedal incorporates flavors from tangerines and grapefruits to add an extra hit of fruity bitterness. 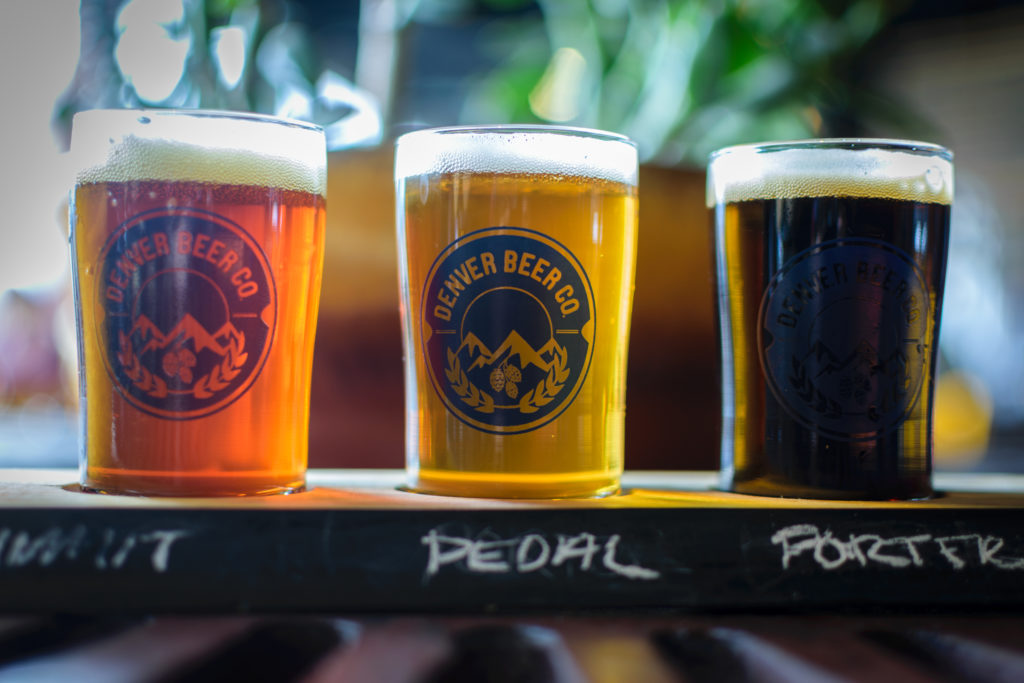 I looked up from my row of beer as I heard a soft pitter-patter on the concrete floor. A little pug and its owner sauntered by, making their way up to the bar. Denver Beer Co. like many other breweries in the city was very dog friendly. Going as far as putting down bowls of treats and water for visiting pups. Man and beast alike could hangout to their hearts content at the popular brewery on the Platte.

Though Denver Beer Company has no kitchen they do have warm soft pretzel’s to complement your favorite brew. That isn’t to say those looking for something more substantial are out of luck. The brewery is in cahoots with some of Denver’s most popular food trucks. Each day of the week features a new truck with unique fair. Parking out front, food trucks happily serve brewery patrons and will even bring your order inside for you when its ready. Coastal Summit Fish Tacos, was running the show while I was visiting. Serving up delicious plates of tacos, fajitas and nachos. The Mexican fare was a perfect complement to my glass of Incredible Pedal IPA.

Saving the most anticipated for last I picked up my glass of Drama Queen. Floral and hoppy, typical of a saison these familiar flavors were quickly followed by a sweet tartness brought on by the cabernet sauvignon wine barrels the beer was aged in. The brew had won gold in the barrel aged category at the Great American Beer Festival, no small feat considering the current popularity the method of barrel aging has taken on in the craft beer world.

As I finished and headed for the door I stopped on may way out glancing at some of the barrels stacked under the giant chalkboard mural. All of them were indeed wine barrels from Napa Valley which at one time housed cabernet sauvignon. Now they were all labeled, “Drama Queen.” Denver Beer Co. hit the nail on the head when they married the complicated world of beer and wine. Looking up above the barrels at the mural one last time, the tipped beer bottle, the golden barrel and enormous beer mug with its gilded ribbon, a worthy crown for a queen. 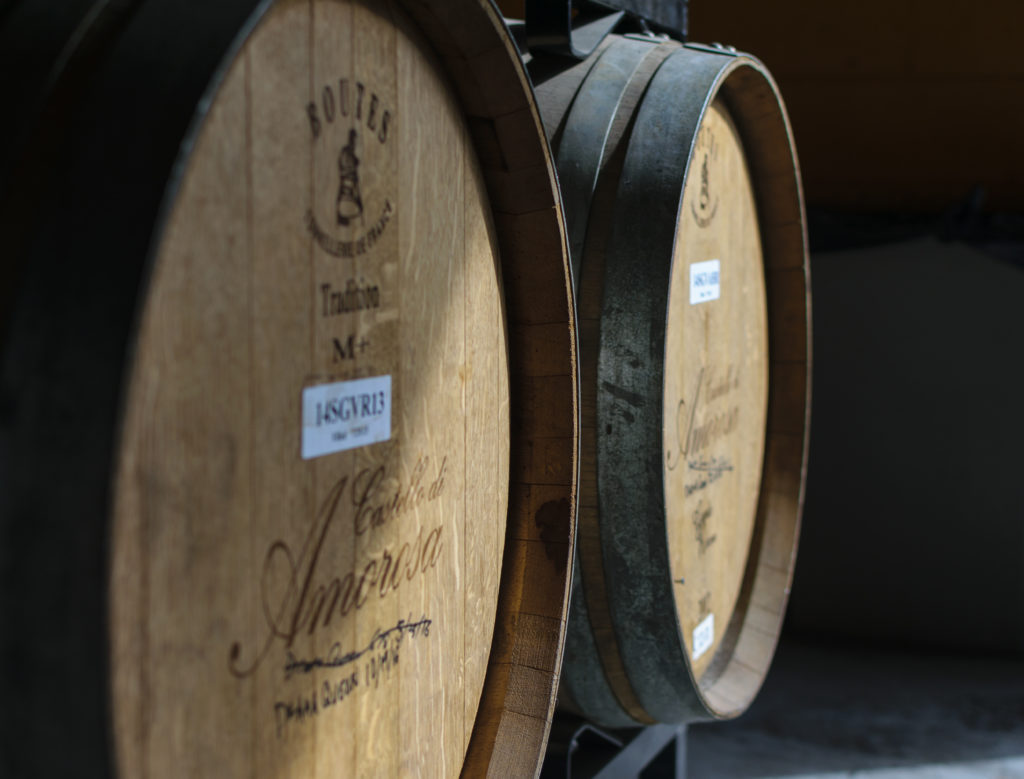