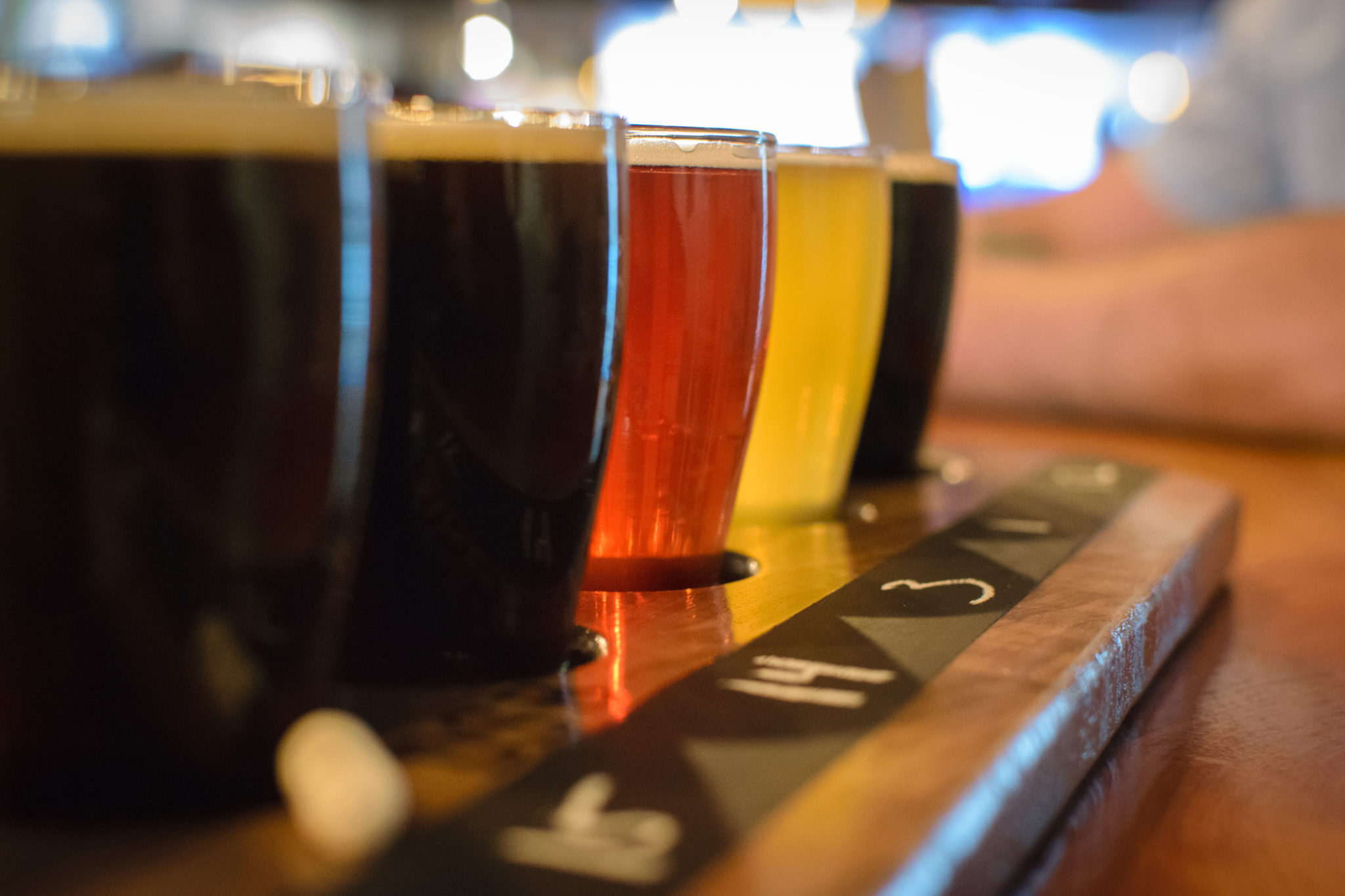 It had been a long hot desert ride. From the South Rim of the Grand Canyon I traveled south. Having just hiked into the depths of the great canyon I emerged muscles sore, stomach rumbling and pallet dry. I craved a burger and most importantly a cold beer. Prioritizing the latter I asked around the small mountain town and soon ended up on the doorstep of Dark Sky Brewing Company.

Aptly named for Flagstaff’s status as the first recognized International Dark Sky City, I walked into the small brewery and was met with the sight of its corresponding logo, an image of the nearby San Francisco Peaks beneath a starry sky, a telescope wrapped in grain and hops dominated the images foreground.

I was first struck by the atmosphere. Refurbished wood panel walls gave the appearance of being inside a rustic barn, small bulbs arranged to give off light in the shapes of stars and the brewery’s logo. The tables were all impressive works of art, a combination of different colored woods arranged in chevron patterns. The taproom’s menu was even artistically set up with different sized chalkboards hanging suspended from repurposed wood. The contemporary bluegrass outfit Trampled By Turtles played overhead, belting out a rural tune about the Shenandoah Valley. 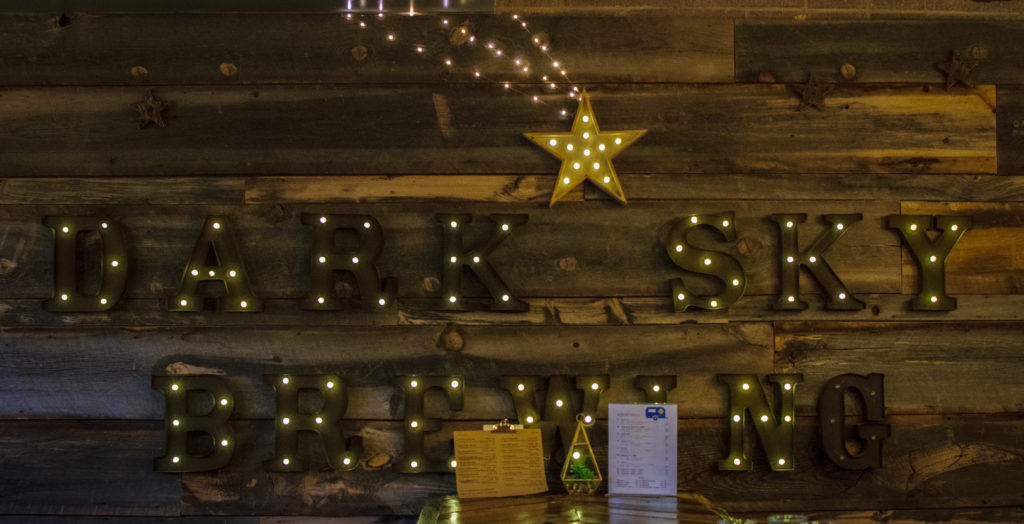 Sitting down at the live-edge wooden bar Zach my taproom host picked up a coaster from a small stack. With a flick of his wrist the Dark Sky embossed piece of cardboard spun on the glossy surface of the bar before coming to a stop in front of me.

“We have a lot of variation.” Zach said as I he pointed at the menu. “Always keeping things fresh and creative, we put out something new every week.”

Scanning the menu that creativity immediately became apparent. Ingredients like black currant, hibiscus, maple syrup, blueberries, Thai basil, and cinnamon all jumped off the chalkboard at me, each of their corresponding creations beckoning to be tasted.

With fourteen fresh beers on tap it was hard to narrow down my choices. Starting things off I picked up a taster of a hazy saison. Dubbed Nectar of the Gods, floral notes were well balanced out with the edition of a sweet and tart flavor of nectarine. Refreshing and light it was the perfect first choice after hiking in the hot Arizona heat.

Get to the Hopper! was equally drinkable. A burst of juicy hop flavors was expected as I took a sip of the hazy double IPA. A combo of three separate hops came together for balance and modest IBUs. This pale was worthy of any IPA or hop fanatic. 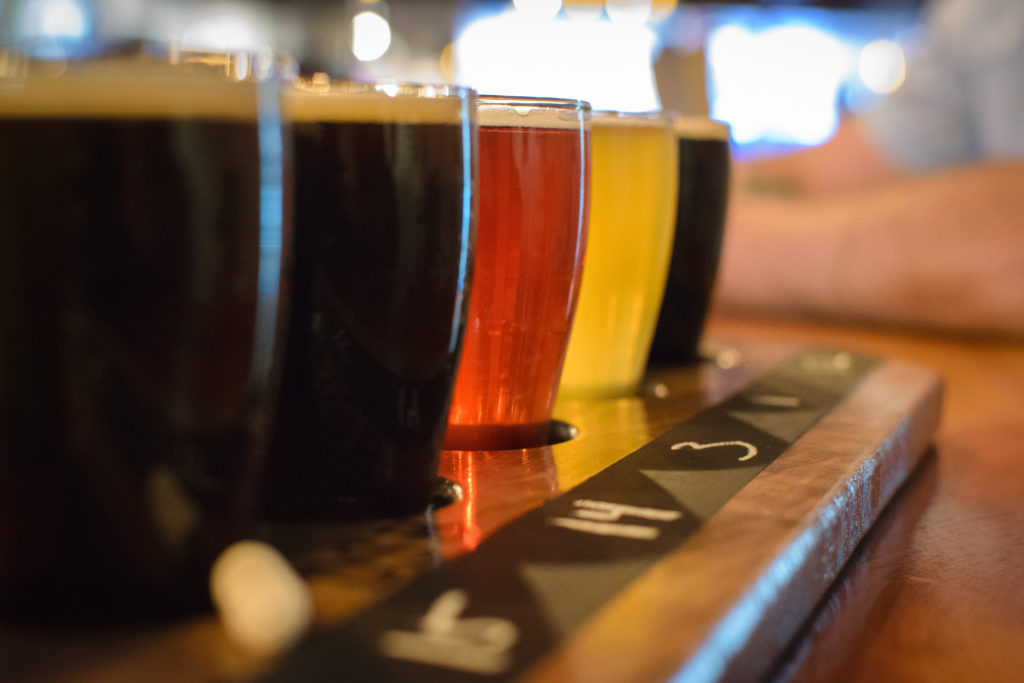 Taking a break from my tasting I soon found myself in conversation with Ryan, Dark Sky Brewing’s owner and beer visionary. I complimented him on the brews I had thus far and toasted his creativity.

“We certainly keep things interesting.” he said, as he rearranged a stack of tasting boards. “We try to put out brand new beer every Wednesday.” he nodded towards a far wall. “Check out the list.”

Gazing over my shoulder I saw a massive double columned list of beers that extended from almost floor to ceiling. Each item on the menu, a new and bold DSB creation.

“We try and use all local ingredients.” Ryan continued, “We do this one with prickly pear cactus.” he stopped and chuckled. “That one was a hit.”

I couldn’t think of an Arizona brew more local than one brewed with cactus. I immediately was disappointed it wasn’t on tap to try. That wasn’t to say there wasn’t plenty on the current menu to peak my interest.

Picking up the darkest beer in front of me the Imperial Spiced Porter called Thai-Phoon sent my taste buds on a ride. Smooth and creamy, coconut flavor sweetened my palette while hints of curry and Thai basil spiced things up. Keeping things dark I reached for Fireside Snuggles, a Barrel Aged Imperial Belgian Stout. Full bodied and rich this heavy stout lended its flavors to aging in red wine barrels with a liberal addition of blackberries.

Dark Sky is the youngest of only a handful of craft breweries in the town of Flagstaff, I was curious how it got its start, especially with such an eccletic lineup of brews.

“It really wasn’t easy at first.” Ryan said, looking around the taproom, his dream come to life. “The couple breweries that were open were already pretty engrained in the community.” he laughed, “Those first six months were the most difficult just to get people to come in and try something new.” 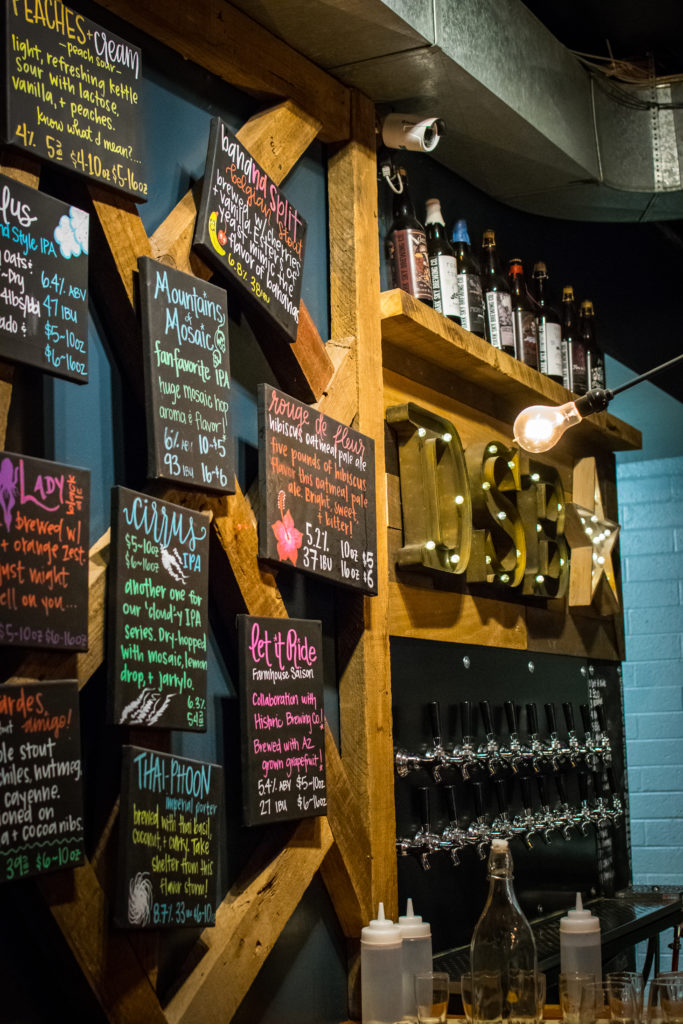 From the moment I arrived off that southern desert highway on my quest for a cold beer Dark Sky’s name continued to pop up as I inquired with locals. My Uber driver, the hotel bartender, the guy waiting in line at the gas station. Ryan and Dark Sky overcame those first six months and with their beer finally circulating amongst the citizens of Flagstaff word-of-mouth began working its magic.

With the taste of hops on my tongue I felt refreshed and rejuvenated. Ready to conquer my next couple days on the trail in southern Utah. In the spirit of spreading the word I know I’d be sharing my recommendation of Dark Sky with other hikers out in the wilderness.

Looking out across the bar I knew there was a gleam in my eye as I caught sight of the brewery’s crowler machine. I didn’t give it a second thought, carrying the cans of fresh DSB beer in my pack would be worth the extra weight.