×
You are here: Home / Hoppy Thoughts Blog / Czig Meister Brewing Company: A Family Sigil For Everyone

Czig Meister Brewing Company: A Family Sigil For Everyone 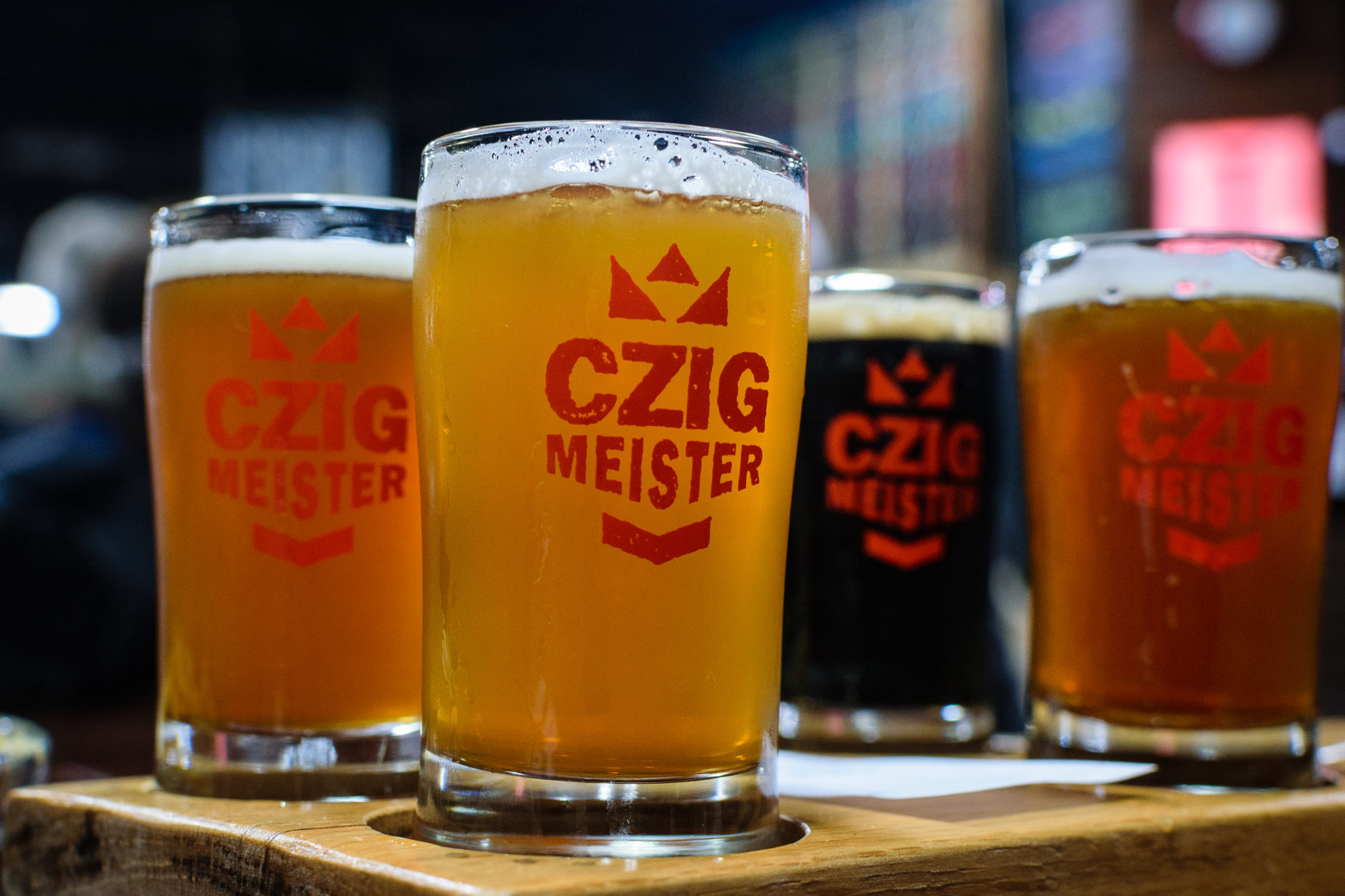 Swinging open the door to the Czig Meister Brewery in downtown Hackettstown my expectations were shattered. Having gone to college in the New England craft beer haven of Vermont and now currently living in the microbrew mecca of Colorado I consider myself a beer snob. In the industry New Jersey has often been described as a desert. As I rolled into Czig Meister I expected to be the lone patron at a small town lackluster brewery. I was wrong.

The brewery was packed. Long wooden tables reminiscent of a German bierhaus were lined with people. Standing barrels served as make shift tables with folks crowded around chatting and drinking. The large red brick wrap around bar was swarmed with a line of customers queued up to get their next brew. Off to the side a group of kids were playing on the floor with building blocks and toys. Every age demographic was present, as if when people decided to go out to a brewery in Hackettstown it was a family outing. 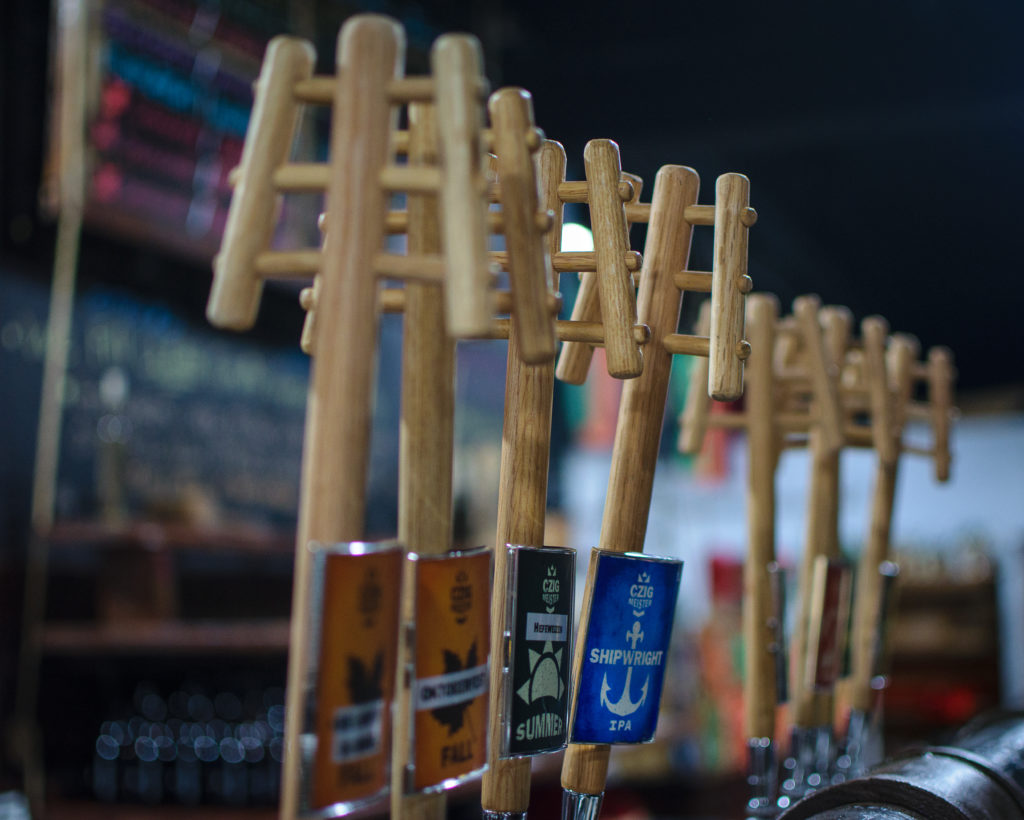 Getting in line I got to chatting with Matthew Czigler, the brewery’s owner, president, and visionary. A microbiologist turned brewer Matt was finally realizing his dream of owning and operating his own brewery. Family owned and operated, Matt brought his brewery dream to fruition by recruiting his father and mother in the endevour. At less than a year old Czig Meister was new on the scene.

“It used to be an old Ford dealership showroom.” he said, sweeping his arm in front of the brewery floor.

“We had a hell of a time scraping all the white paint off the walls.” he added. “I really wanted to bring out the brick to add to the old time feel.”

The old time feel Matt was speaking of was one of medieval Europe, harking back to the days of old world taverns of Bavaria and Germany. Matt and his family cultivated this image in the best way. He and his father helped hand make the bar out of reclaimed wood. Each of Czig Meister’s core beers had its own medieval style banner which draped down from the brick walls. Handmade by the family the banners depicted falcons, a huntsman’s bow, a blacksmith’s anvil, and pick axe and shovel. In addition, Matt chose a masher as the brewery’s and Czigler family’s sigil. 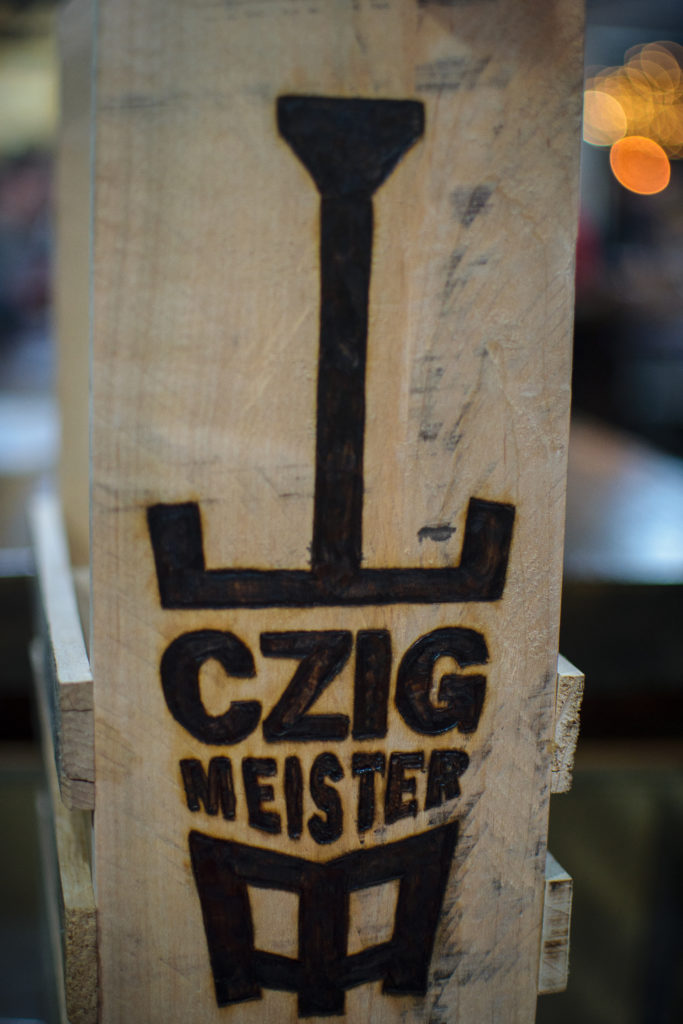 Sitting down, I quickly dug into tasting some of Czig Meister’s flagship beers. Huntsman a traditional German style Kolsch was light and refreshing. As someone who has tasted beer on the streets of Munich the crisp and subtle flavor of the Kolsch was nostalgic. Falconer, a session IPA is touted as being brewed with German Kolsch yeast. The taste is fruity with hints of citrus and a welcome pale ale addition to Czig Meister’s lineup. The British inspired Prospector is a red ale evenly balanced between malt and hops. I was hit with tastes of caramel followed up by some light bitterness and fruity sweetness at the end.

In addition to a core lineup of five beers Czig Meister also busts out some experimentation surprises such as an English Barleywine, a toasted Coconut Amber Ale, and a fruity and refreshing blackberry Hefeweizen.

As I sat and sipped my flight of beer I glanced around the busy taproom. The brewery had no kitchen or food menu but I noticed many of the patrons brought their own snacks. Still unable to get over the family atmosphere I saw kids reach up on tippy toes to grab at platters of cheese and meat. A couple hunched over homemade sandwiches atop a wooden barrel. The owner of a golden retriever stooped down from his seat to give his pup a slice of pepperoni. The dog devoured the treat and then lazily rolled back over to lounge on the floor. Off against one wall a family played a board game around a circle of couches. Grabbing at bowls of chips and salsa on a wooden coffee table. In the center of all the chaos an overwhelmed looking pizza delivery boy looked around the room searching for whoever phoned in the order.

“Your brewery is really family friendly.” I said to Matt as I brought my empty glasses up to the bar. “I’ve never seen anything like it.”

Matt just laughed, “Yeah.” he said looking around at his customers. “Sometimes there’s more kids and dogs than adults in here.” 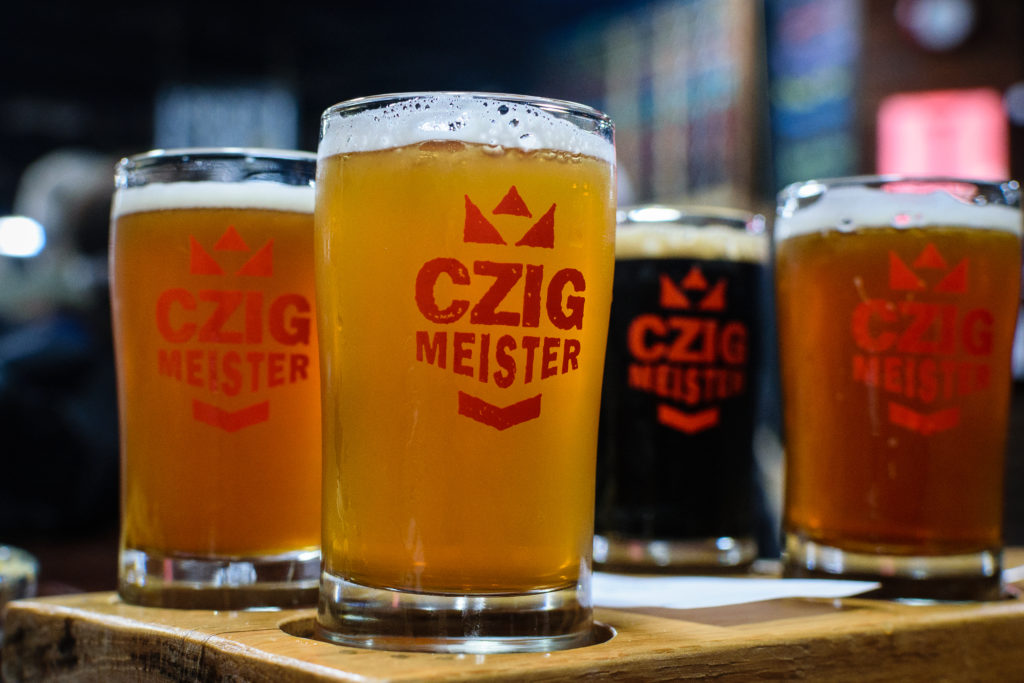 Settling up my tab I started reflecting on how Czig Meister single handedly shattered my perceptions of the New Jersey brewery. The solid flagship lineup of beer coupled with the fun atmosphere and old world appeal proved Czig Meister can hold up to the craft beer powerhouses of the West. Kids, dogs, old and young, it seemed the whole of Hackettstown was here that night. I was struck with the notion that not only could you bring your craft beer loving buddy down to this Hackettstown hotspot but it was a brewery you could bring your whole family.