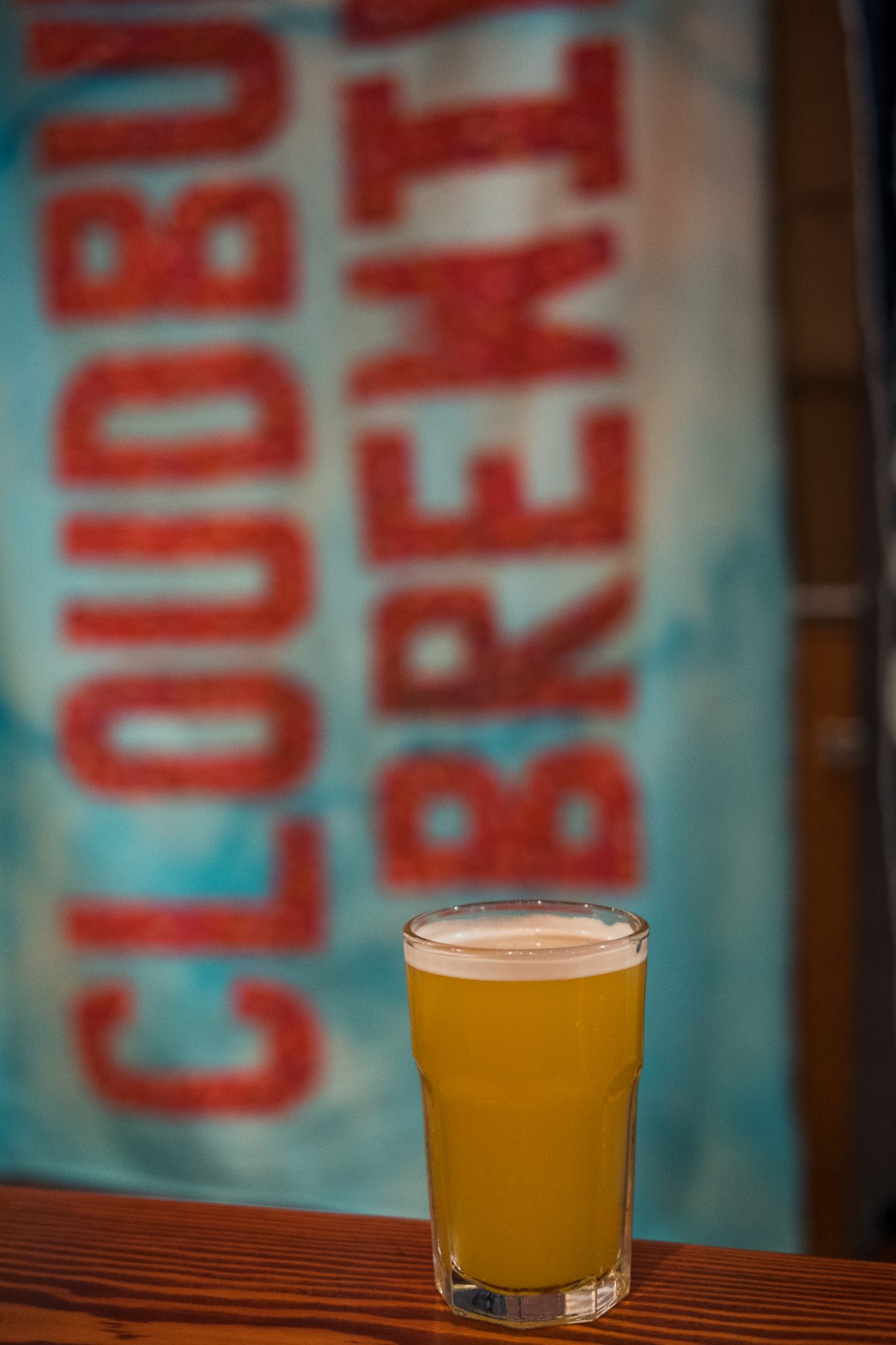 The first time I visited Cloudburst Brewing Company was almost entirely by accident. It was my first time in Seattle and like any good tourist I was in the midst of seeking out the spots the famed Northwestern city was known for. It was a typical fall Seattle day, a cold drizzle fell from the sky. It gave the asphalt a black shine and carried the salty smell of the nearby Puget Sound. I walked Pikes Place, passed brick walls with tapestries of chewed bubblegum, passed vendors tossing fish, passed the long line in front of the first Starbucks.

A few short blocks later and I thought I had cleared the busy bustle of Pikes Place when I encountered a small crowd on the sidewalk. They milled about, seemingly indifferent to the cold rain that continued to fall. I came up on the group to see what the fuss was about. No historic Seattle landmark or bookmarked tourist trap, but a brewery. Looking up at the wet red brick building the brewery’s name couldn’t have been more appropriate; Cloudburst Brewing Co. Peaking my curiosity further was the fact that the brewery wasn’t even open yet. The crowd patiently waiting in the wet Northwestern chill for the doors to be unlocked. 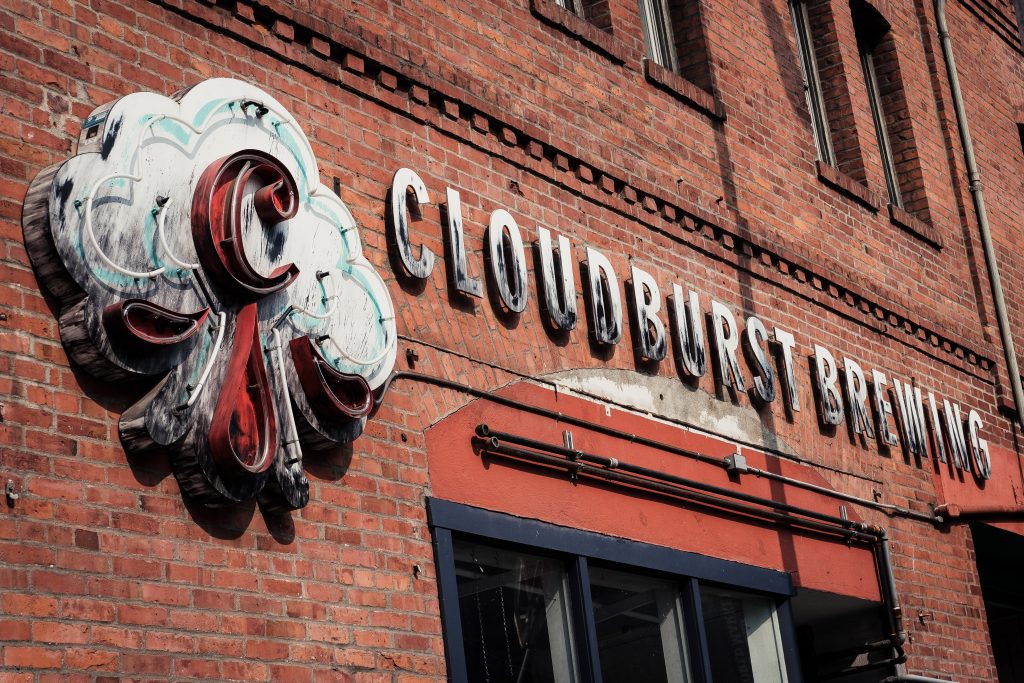 “Are they releasing something special today?” I asked a guy wrapped up in a Patagonia rain shell gesturing at the surrounding crowd.

“Not that I know of.” he said, stealing a glance at the signage on the door. “It’s always like this.” he added with a shrug. “They’re always busy.”

Moments later the doors opened and the thirsty loiterers rushed the threshold. The brewery was humble and cozy inside. An inviting escape from the chilly rain. People shuffled to form a queue at the short bar, where two tenders stood at the ready. Square tables stood around the taproom’s entrance and center with high stools lining the countered walls. The red brick added industrial character to the atmosphere with one wall lined with various colored flags depicting the brewery’s name.

Reading the chalkboard menu I immediately saw why the brewery had gained its following. Cloudburst Brewing are hazy hoppy specialists with the bulk of their lineup featuring juicy, New England style creations. Looking at passing glasses of both dark and clear brews I could tell that their one-off stouts, sours, and light ales were also popular.

I made my way towards the back of the line to mull my options and to get my hands on one of their hoppy brews. 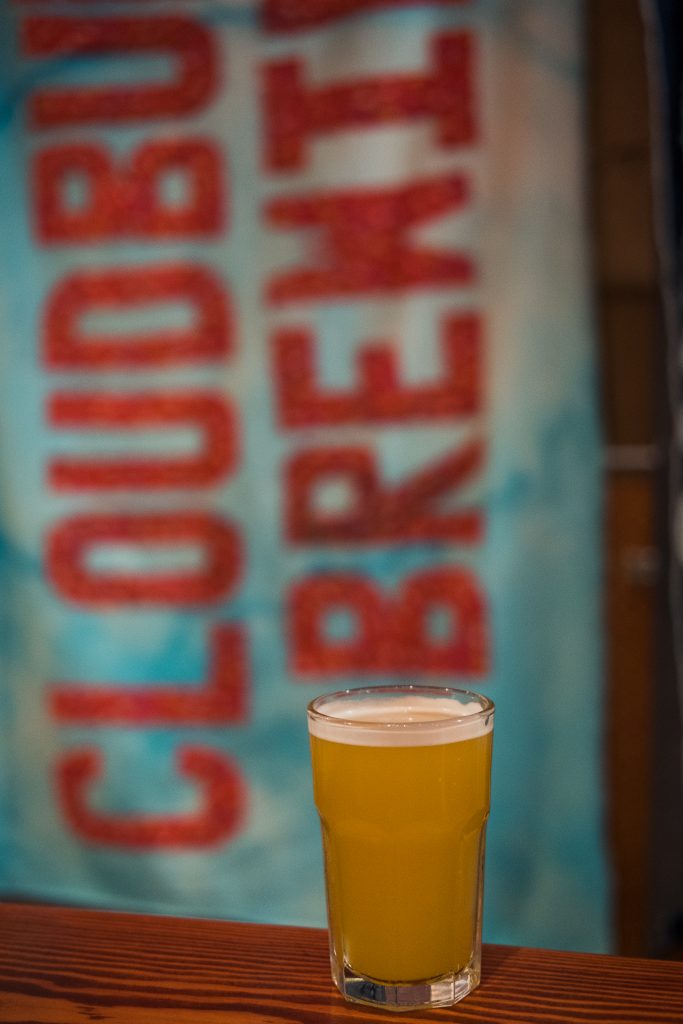 A little less than a year since my first Cloudburst visit I found myself back in Seattle. In the throes of summer it was not cold drizzle but heat and hazy summer wildfire smoke that plagued the city. I sat at one of Cloudburst’s countered walls and sipped on Impulse Buy. A hazy IPA packed with Citra, Nelson, and Vic Secret hops. The hoppy combo lent lots of citrus aroma and a silky smooth mouthfeel. Cloudburst does not offer tasters, but after my first visit I knew I wouldn’t be let down from any 10 ounce pour I chose.

You Can’t Fire Me I Quit, was my favorite this time around. A Double NE Style IPA loaded with Mosaic, Citra and Blanc hops. Notes of pineapple and fruity citrus were strong backed up with all the cloudy haze you’d expect from a well done NE IPA.

On a whole different level, Ministry of Truth showed off Cloudburst’s darker brewing chops. A Double Stout with a stronger 8.1%ABV, it was rich and chocolatey. The fruity addition of copious amounts of fresh blackberries added a welcome element to an already robust flavor profile. With a nod toward Bob Ross, Happy Little Clouds is Cloudburst’s current Dry-Hopped Pilsner. Brewed with traditional pilsner malt and a fun combo of German and American hops meant a crisp and refreshing twist on the usual style. Easily could be enjoyed all day no matter the weather.

Sitting on my stool and sipping my beer I watched the line stay ceaseless as people continued to file in and queue up. It was easy to see how they’d gained such a following so quickly. With consistently delicious hoppy creations and collaborations with the likes of hazy big-wigs like Modern Times, Cloudburst has grown to be a local favorite.

Finishing up my beer I began contemplating which crowler I’d take to go. Less than an hour earlier I found myself power-walking through Pike’s Place. This time hardly blinking as I passed the fish throwers, buskers, Starbucks patrons and vendors. I was on a mission to get straight to Cloudburst. Despite being fifteen minutes early before the brewery opened, a crowd was already gathered on the sidewalk. I leaned against the warm brick and waited. As the congregation steadily grew closer to opening time an Uber pulled up and two bearded guys got out.

Making their way into the crowd one wondered aloud, “Are they having a party or something?”

One guy, who had been waiting even longer than I had perked up.

This time I knew why.