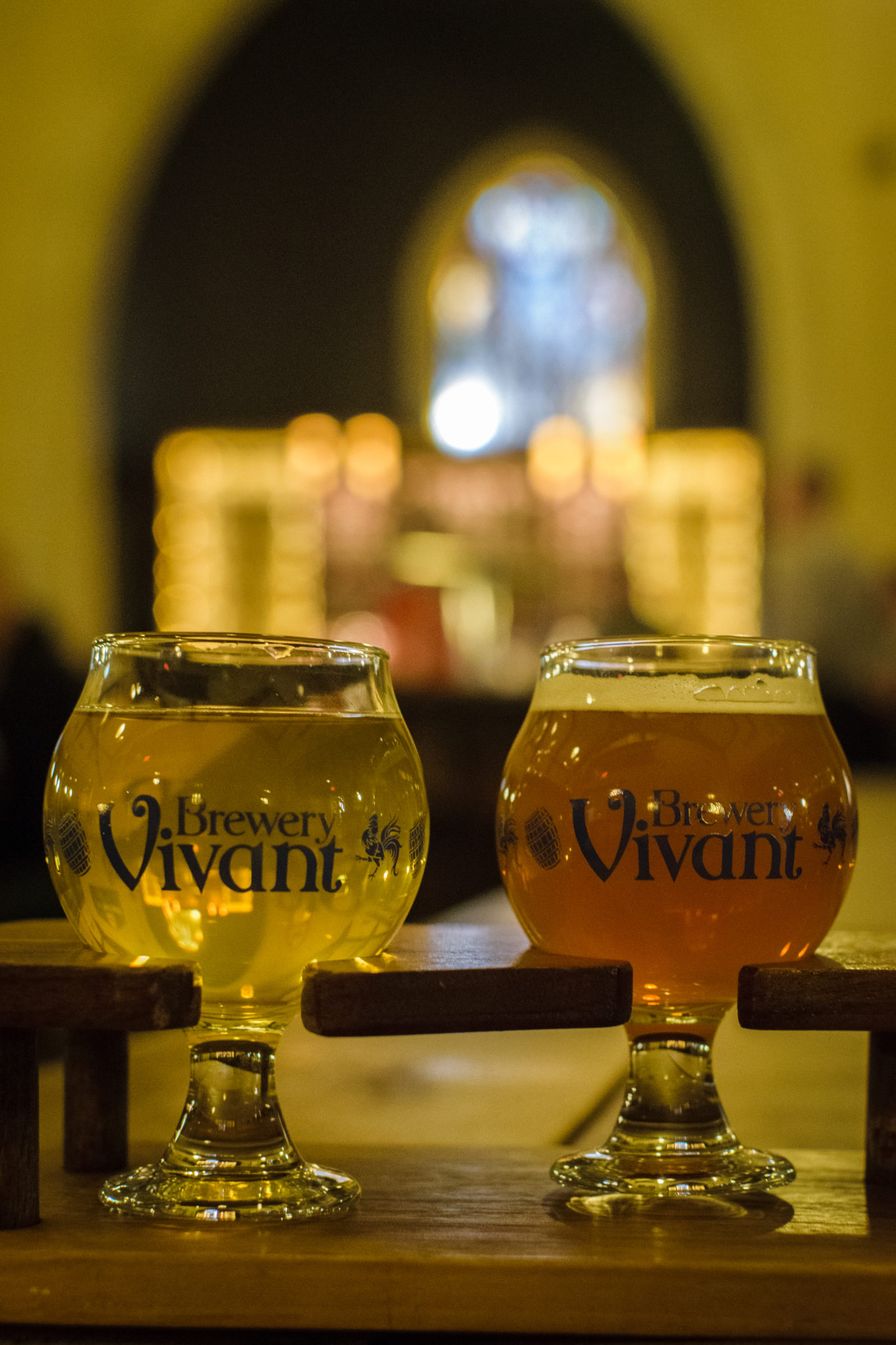 I’d have been hard pressed to find myself in a more eclectic taproom. Sitting across from Jonathan Ward, Brewery Vivant’s very own “Experience Warden” I got the building’s colorful history.

“You’re sitting in what used to be the chapel of an old funeral home.” he said, gazing out across the room. “Pews were lined up this way,” he gestured towards the far wall. “And the bar is where the altar used to be.”

I looked out at the U shaped bar, resting below a vibrant stained glass window. The irony made me smile. With any other business, reclaiming a funeral home could be considered a taboo. Brewery Vivant makes the establishment’s macabre past work in the most seamless way.

Our conversation shifted to Wallonia, a region in southern French speaking Belgium where the countryside birthed beers from farmhouses and abbeys. Brewery Vivant draws its name from the French “bon vivant” which translates to “the good life”. The brewery’s logo, a colorful yellow and red rooster is a nod to the Wallonia flag and insignia.

As Ward spoke passionately about the influence of Belgian beer I gazed around the taproom. With its low hanging chandeliers, rows of pew-like tables, stained glass windows and criss-crossed wooden beams it was easy to imagine myself in an old Belgian abbey rather than a Michigan funeral home turned brewery. Given Brewery Vivant’s inspiration they couldn’t have found a better venue to host their delicious creations. 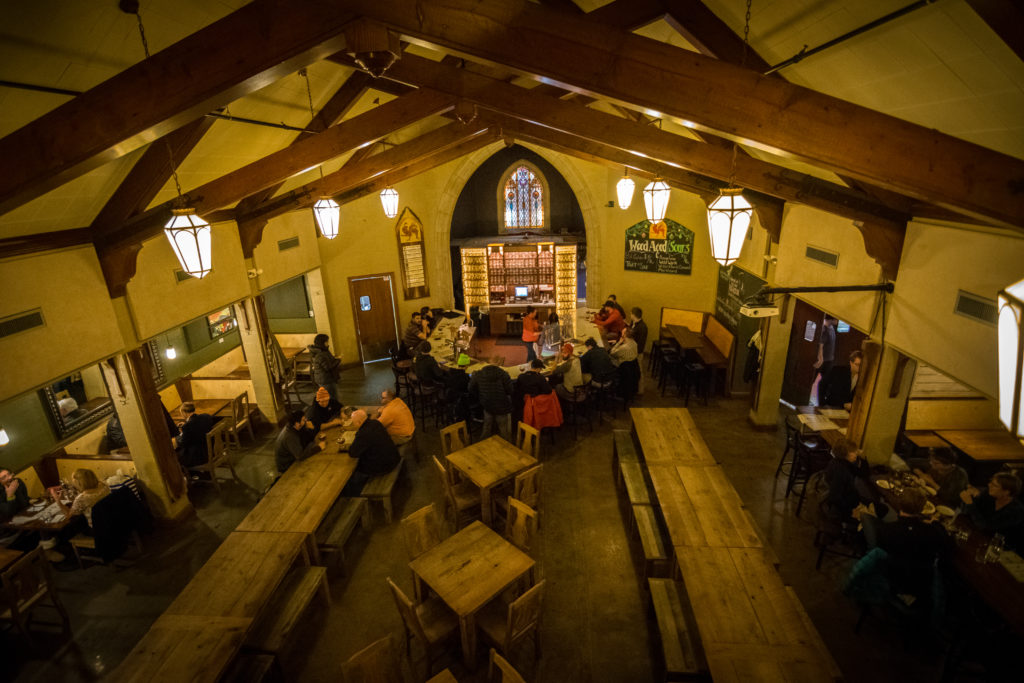 Brewery Vivant takes the traditional influences of southern Beligian beer and pours into it pure passion and ingenuity. Kicking it off with the Farm Hand, this farmhouse style ale has the perfect blend of body and sweetness, cloudy in appearance its subtle tartness pays excellent homage to its French and Belgian origins.

“This one definitely harks back to Wallonia.” Ward explained. “Blue collar, hands in the dirt, a working man’s beer.”

Getting its namesake from Vivant’s rooster insignia, Big Red Coq is a local fan favorite. A Belgian-American style red ale combines Citra hops with caramel malt to create a deep red beer with exceptionally bold flavor. On the darker end of the spectrum lies Tower of Sour. A heavy stout with just the right amount of fruity sweetness and barrel aged tartness to make your lips pucker.

I picked up a taster of Angelina, Brewery Vivant’s premier barrel aged beer.

“Angelina took bronze at the Great American Beer Festival.” Ward added, as I brought the glass to my lips.

Well balanced and light bodied it was slightly sour but held the perfect bite of bourbon as I finished. If I were a GABF judge it would have gotten my vote. 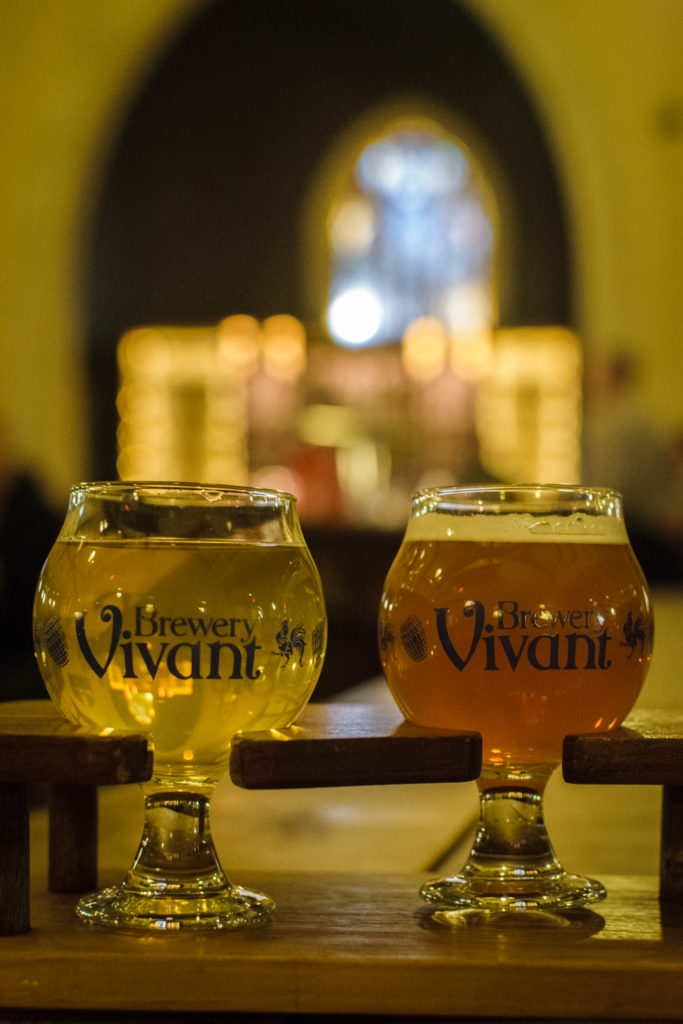 “So, ‘Experience Warden’?” I asked Ward, referring to his title.

He chuckled, “Well its a play off my name, Ward, but really my job is making sure everyone who comes into our brewery has a good time.”

Through outreach and networking Ward connects consumers with Brewery Vivant’s beer and mission, from everything to volunteer events, charity contributions, bottle releases to the brewery’s floor plan are all carefully constructed by Ward to optimize the brewery’s lasting impression.

It was obvious that Brewery Vivant took as much pride in their cuisine as they do in their beer. Ward soon explained that he even brought his girlfriend, Katy Waltz into the fold. A five star pastry chef Katy brings her expertise to Brewery Vivant, cooking up sweet and savory deserts that add the perfect finish to an already well rounded menu.

Listening to Ward speak about everything from the brewery’s mission, to its beer, to the well prepared food I could immediately tell how much passion and thought went into every aspect of the brewery’s operation. With its rich backstory and its fresh take on old traditions, each time I roll through Grand Rapids I would gladly park myself at Brewery Vivant’s bar upon its altar of beer and happily stay until closing time.