×
You are here: Home / Hoppy Thoughts Blog / An Arsenal, a Navy Yard and Potential Grizzlies at Bluejacket

An Arsenal, a Navy Yard and Potential Grizzlies at Bluejacket 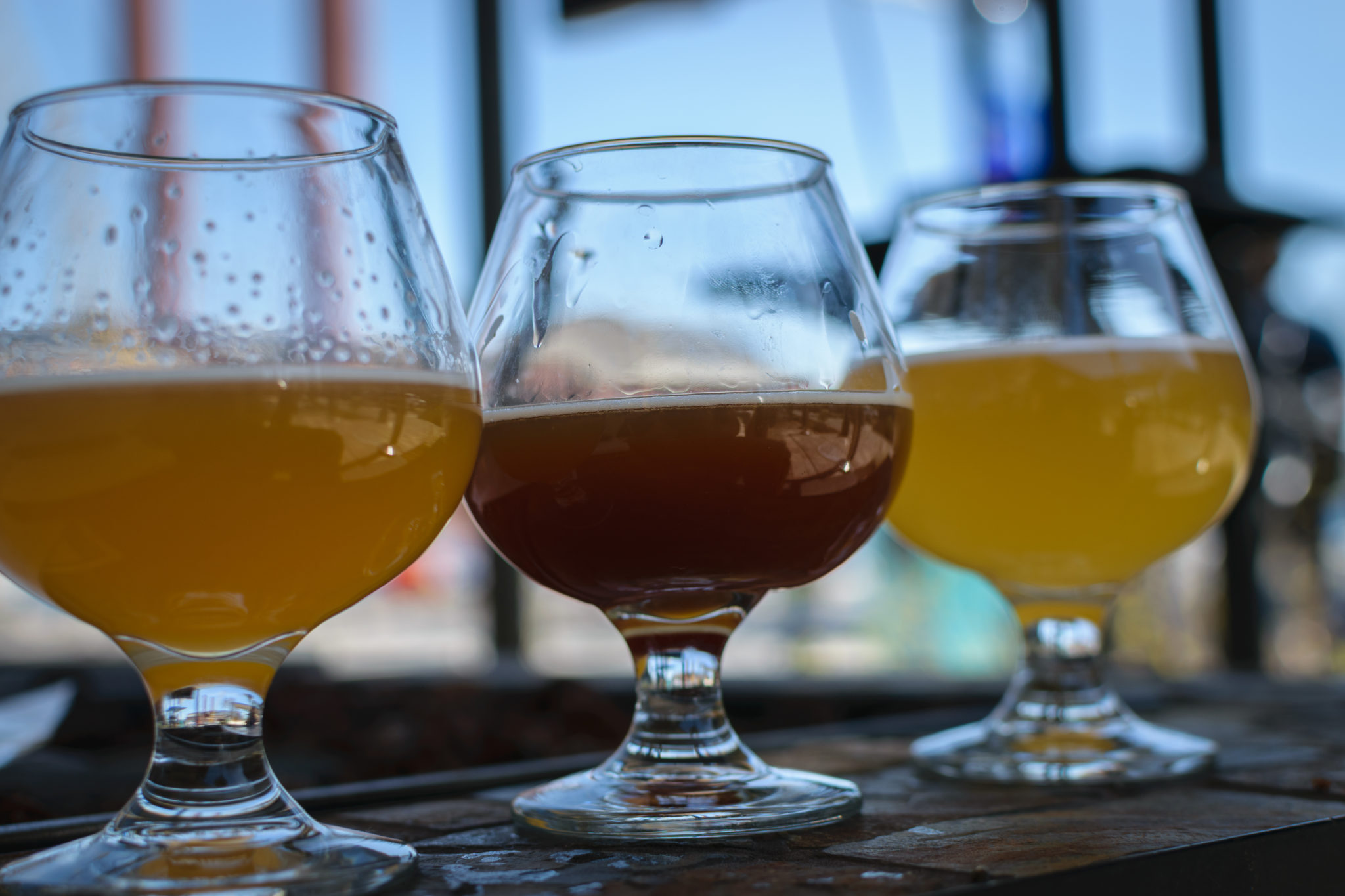 The sun was high in the sky when I arrived in Washington D.C.’s famous Navy Yard. Passing through the double glass doors of Bluejacket I was shocked by how busy it was for being so early on a weekday. I did a lap passed occupied booths, a long crowded bar, and high tables of seated patrons. No matter, it was a nice day in the capitol and Bluejacket had ample outdoor seating.

Sectional couches and chairs surrounded tables of stone on Bluejacket’s outdoor patio. I took a seat facing out towards the south. The historic shipyard, the birth place of the US navy on the Anacostia River was a mere stone’s throw away. Squinting up into the midday sun I could see seagulls circling the smokestacks of the old Navy Yard. A voice stirred me from my revery.

“Anything sticking out at you?”

I looked up at the figure standing over me. His name was Conner and when I confessed I hadn’t looked at the menu yet he began giving me a run down of the twenty-or-so brews that Bluejacket had on tap. Knowledgeable and passionate about the beer Bluejacket was churning out, Conner made it easy to settle on a flight of beer based on his recommendations. 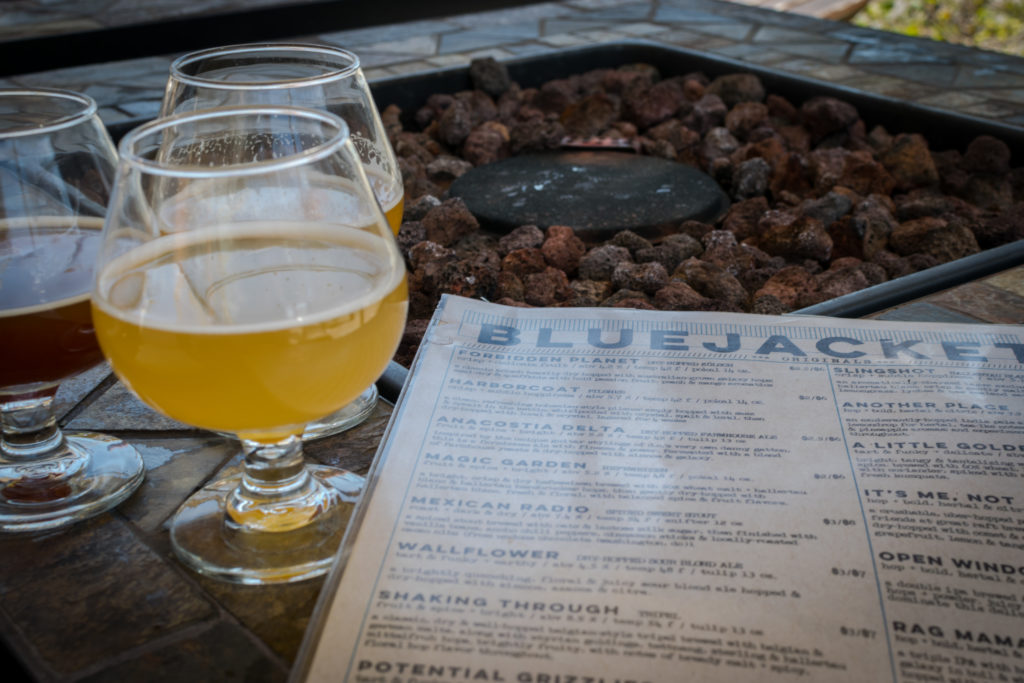 The sun reached its zenith and radiated heat down onto the curbside patio. By the time he came out with the row of taster glasses I was craving my beer selection. Another Place, a bold and citrusy India Pale Ale was the first glass I reached for. With three varieties of hops and notes of melon and pineapple it immediately took the edge off of the hot day. Hefting the next glass of the slightly darker Blue Sky I was immediately hit by malts rich with texture and balance.  Finishing off the weizenbock I detected flavors of fig and spiced cocoa.

A big fan of stouts I was eager to try my next glass of Mexican Radio. Borrowing some cacao nibs from a locally sourced vendor this stout combines chili peppers, cinnamon sticks and vanilla bean to create a brew that is dark and roasted, sweet and spicy.

Before I could polish off my glass of Mexican Radio I found Conner standing by once again.

“You gotta try this.” he said, placing another taster down in front of me. “It’s one of our latest.”

He pointed to the beer’s description on the menu and was gone. Toted as a dry hopped farmhouse ale the brew was slightly sour and tart with earthy undertones. Multiple hops, a two month fermentation process and collaboration with the Arizona brewery Arizona Wilderness made for a unique one-of-a-kind saison. Endearing me further towards the beer was its name, Potential Grizzlies. I couldn’t help but smirk at this politically charged quip. 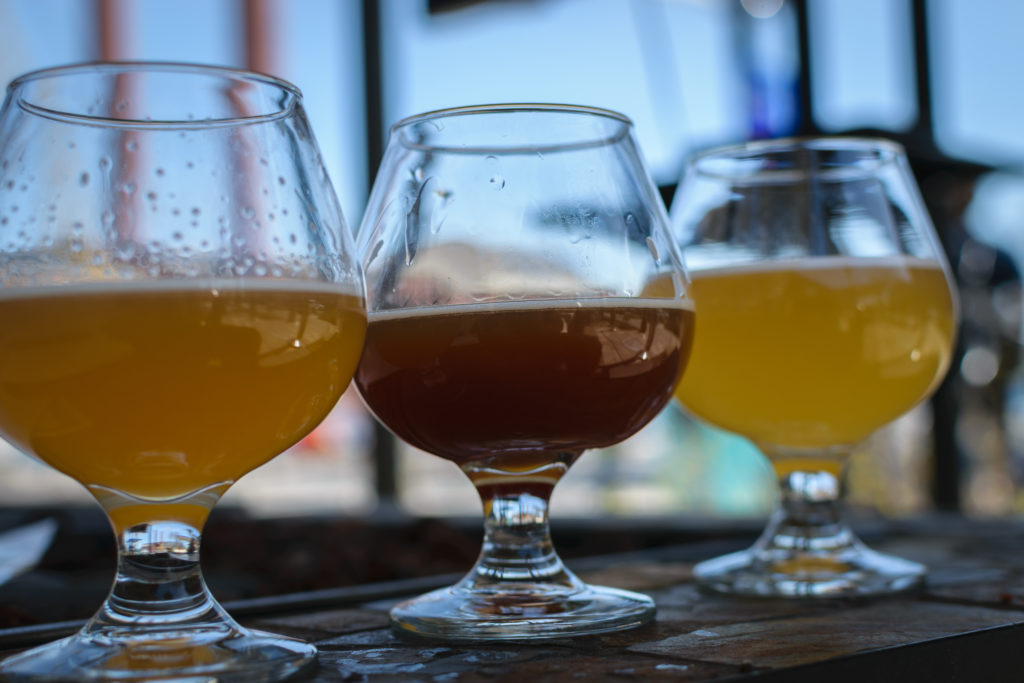 “Excuse me.” I turned towards the voice that pulled me away from my tasting.

“Would you mind taking a picture of us?” Two girls sat at the opposite end of the sectional couch. One, with short dark hair was reaching for a napkin after taking a bite from a toasted panini. The other, with long blonde hair sat with her arm extended towards me, a cell phone in her hand.

“Do you guys come here a lot?” I asked after snapping their picture.

“Oh yes, at least once a week.” the girl with blonde hair answered. Her friend nodded in agreement through another bite of panini.

“There’s a bunch of breweries in D.C. Why do you guys like Bluejacket?” I inquired.

Laughing, the blonde haired girl raised her pint glass. “The beer of course!” Her dark haired friend swallowed and gestured towards her sandwich, “The food.”

The food she spoke of came from Bluejacket’s adjacent restaurant, The Arsenal. With both full lunch and dinner menus the restaurant served up dishes ranging from bratwurst and burgers to falafel, kielbasa, and porchetta sandwiches. The locally sourced ingredients stay true to the Bluejacket mission and the restaurant’s taps flow with a constant lineup of beer, many exclusive to the site.

I pondered this. Many breweries serve food but its rare to find the chemistry between the two businesses like Bluejacket has. Often times people go to a brewery for the beer with the added bonus of grabbing a bite at the same time. At Bluejacket it seemed that they grabbed audiences from the beer and culinary world effortlessly. 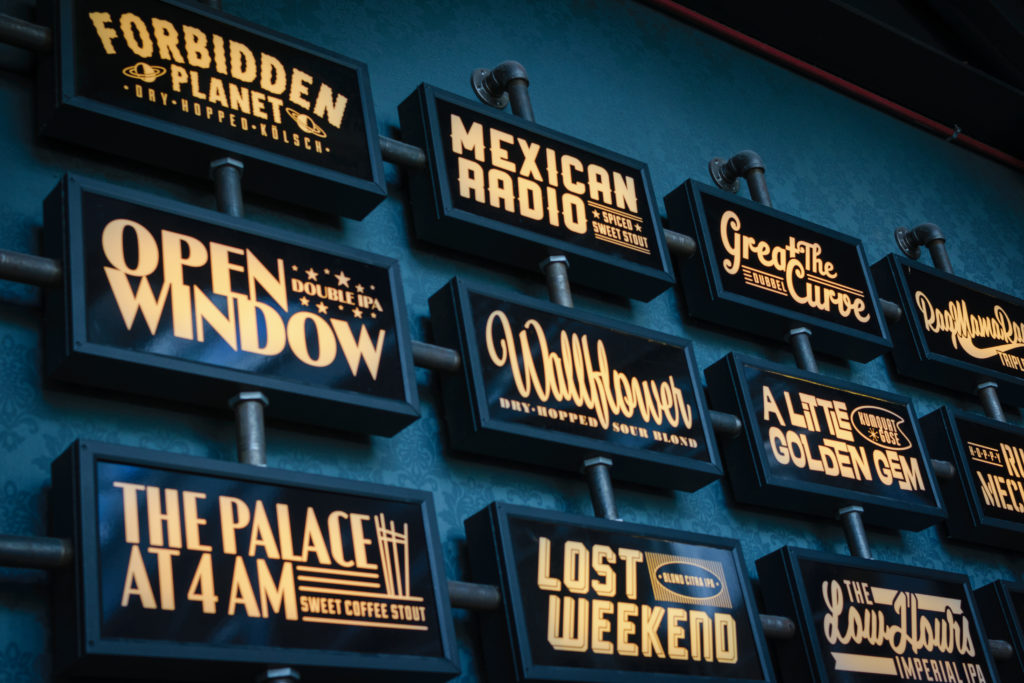 Settling up my tab with Conner I gained even more insight into the duel restaurant/brewery venture.

“I love the interplay between our restaurant and brewery,” he began. “Everything is just so seamless. Our chefs are as creative with the food as our brewers are with the beer.” he placed my change down on the table and then looked up at the Bluejacket sign hanging over the door. “It’s just a really cool atmosphere.”