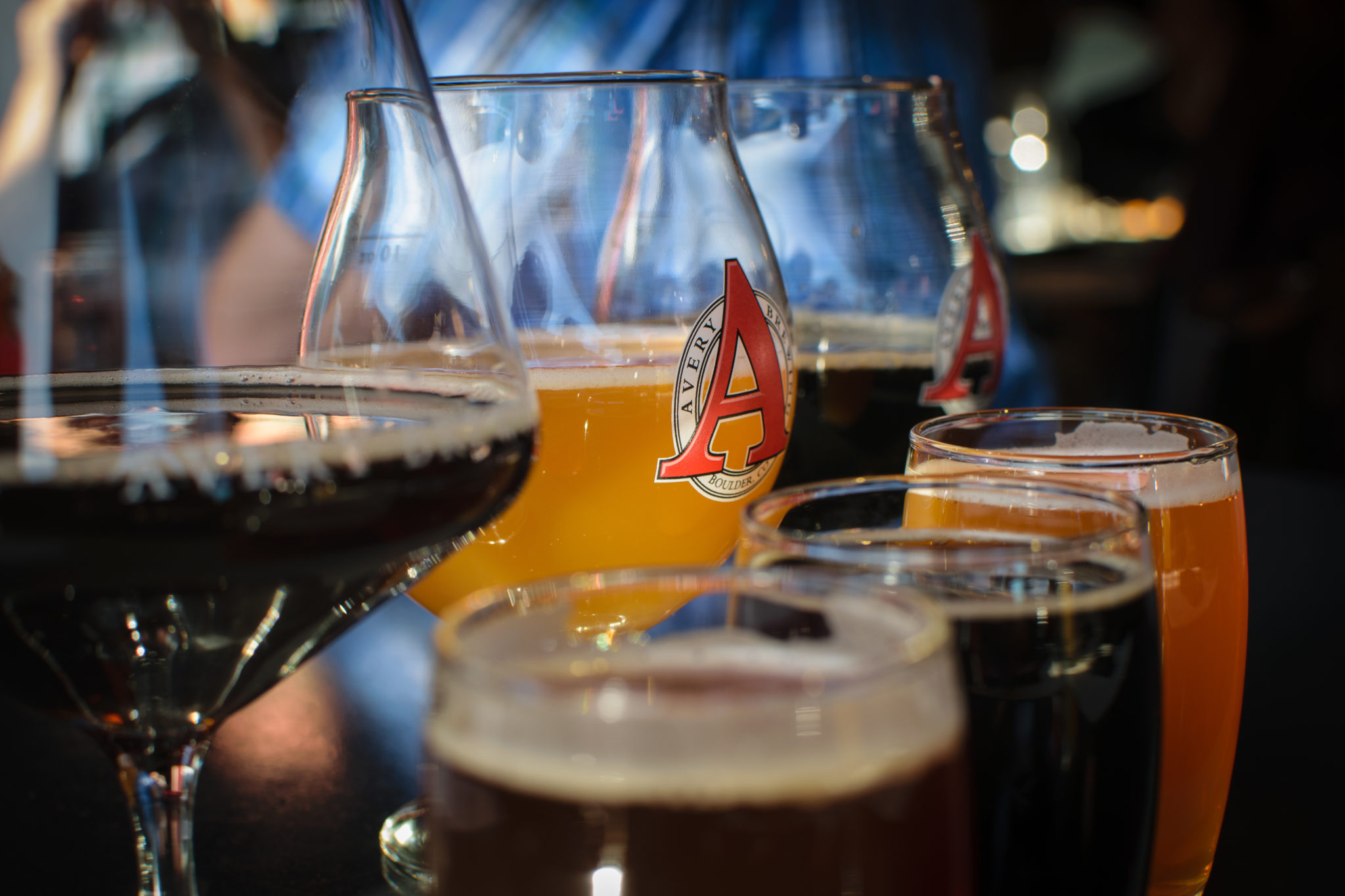 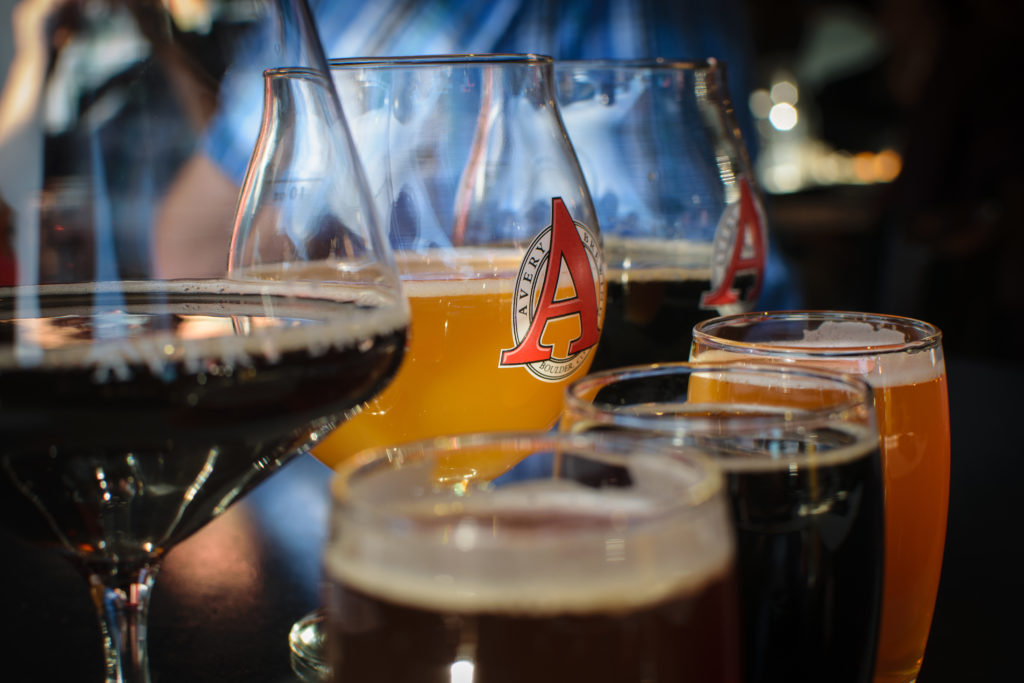 “Is it always this busy?” I asked the guy manning the tap as I squeezed my way up to the bar.

He glanced around the room, seemingly noticing the enormous crowd for the first time. “Yeah” he said with a laugh. “Doesn’t matter the day of the week, as long as it’s warm out.”

In mentioning the temperature, he wasn’t wrong. As I collected my tasters and moved onto the patio the atmosphere resembled a July 4th barbecue rather than a late day in October. On this warm Friday evening people were gathered around picnic tables, lounging in the grass, and playing games on the lawn. Umbrellas blocked the setting sun and a meat smoker emitted wisps into the sky.

As I took a seat I gazed up at the massive holding tanks that comprised a portion of Avery’s facility. A live rendition of the Grateful Dead’s Sugaree began playing over the outside speakers. The smell of smoked meat and hops wafted across the patio. People all around laughing and socializing, enjoying a close to their work week. It really was like a barbecue.

Inside, the taproom was just as crowded. Long wooden tables flanked by high barstools faced huge open garage style doors exposing the taproom to the patio beyond. Taking a glance up at Avery’s vast menu was a testament to its position as one of Boulder’s largest craft brewers. So many interesting and tasty-sounding options stuck out it was hard to narrow down what I wanted.

Keeping with the trends, there was an extensive list of sour ales. Apricot, raspberry, and rum barrel-aged were all options. The Scarlata Cucumis, a blonde sour ale brewed with cucumber and hibiscus looked particularly good. Gearing up for the cold weather, a slew of stouts and brown ales also graced the menu. The aptly named Tweak, a stout aged in bourbon barrels and brewed with organic espresso beans, stood out as a dark and tasty pick-me-up. I ordered myself a taster of the Pump[KY]n, a pumpkin porter spiced with nutmeg, cinnamon, allspice, and cloves. For an added kick it was aged to maturity in Kentucky bourbon barrels.

Avery’s lineup didn’t skimp on IPAs, the Fall Day IPA brought a smile to my face knowing that Avery, harking back to its local roots brewed the beer with Colorado spruce tips. As I continued to scan down the menu, I happened upon a beer that struck me as being so unique I immediately ordered a pint.

Avery describes Nester’s Cup as being inspired by the ancient Mycenaeans and in homage to the earliest of beer entrepreneurs. They brewed this selection with six-row barely, figs, einkorn wheat, acorn flour, and elderberries, much like the pre-Greek civilization would have done around 1600BC.

“How’d they think of this?” I asked the server as she thumped the pint down onto the table.

“Those guys are wild, man,” she laughed. “They’re always coming up with crazy stuff.” She nodded her head towards the back of the brewery. “I never know what’s gonna come out of there.”

For how dark the brew was, it was surprisingly light and refreshing. An initial sweetness brought on by the figs and elderberries was complimented well with a nutty finish that echoed the acorn flour. Maybe it was the unique combination of ingredients or the knowledge of the recipe’s origins, but I could really picture toga clad ancients sipping the same drink long ago.

I was stirred out of my historical daydream as an entire wedding party entered. The backyard barbecue vibe quickly shifted to rehearsal dinner as both formally dressed bride and groom and their friends and family took their seats at one of the reserved wooden tables. Before long they all had a beer in hand and blended in with the noise and revelry of the rest of the crowd. They toasted the soon to be married couple and sat down as servers began bringing out plates of food.

This drew my attention to Avery’s creative and diverse menu. Typical pub fair was present, warm soft pretzels and cheese, seven layer dip, onion soup, and chicken wings. Scanning down the menu, options gradually became more elaborate and delicious. Alaskan halibut, grilled salmon, roast veggie tacos and surf and turf. It also became clear what prizes the meat smoker, still happily chugging away in the corner, would give up. Spare ribs, beef brisket, bratwurst, Colorado tenderloin and strip steak. As I looked around at the other patrons, many with plates of their own, it was clear people didn’t come to Avery just for the beer. 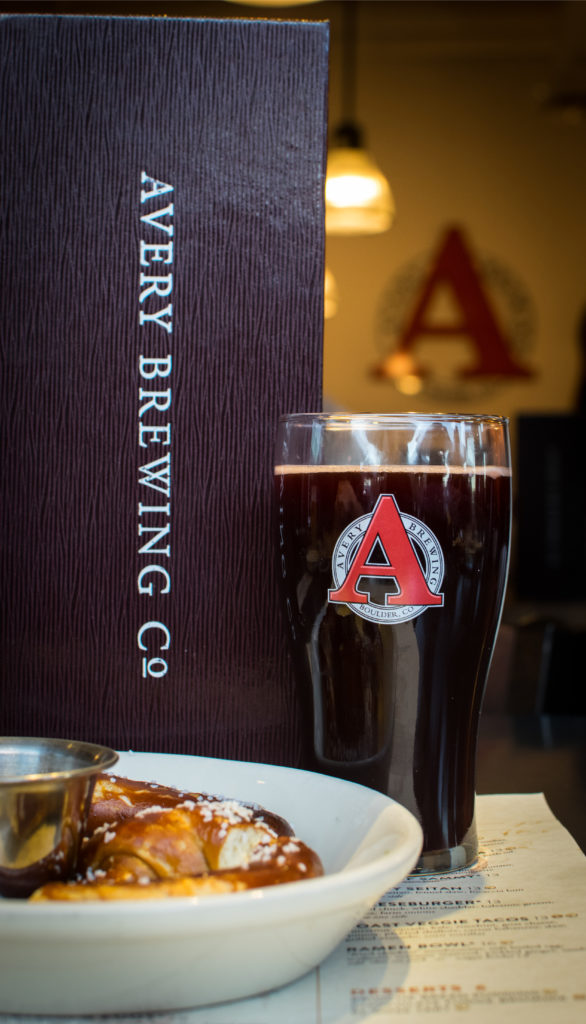 As I observed the crowd, something struck me as odd. Despite it being over seventy degrees outside, there were a slew of people wearing sweaters– multi-colored abominations with prancing reindeer, jagged pine trees, and symmetrical doves. It wasn’t until I saw a poster over the sink in the bathroom that it all became clear. Today Avery was rolling out a brand-new beer in celebration of the turning of the season. Old Jubilation was touted as a strong winter ale made with a blend of five specialty malts to create flavors of hazelnut, mocha, and toffee. It read, “show up to Avery in your best ugly sweater and enjoy a free pint.”

Sitting back down at my seat, though ugly sweater-less, I ordered a sample of Old Jubilation. I looked around at the mishmash of wedding attire, ugly sweaters, and typical Colorado fashion with the smell of barbecue and the haze of the smoker drifting up into the evening air. Avery reminded me of its hometown of Boulder: quirky, creative, and a little out there. Sitting back with my glass of Old Jubilation I thought there was no better place to spend a Friday night.