×
You are here: Home / Hoppy Thoughts Blog / The Art of the Flight: A Hoppy Guide to Sampling Beer

The Art of the Flight: A Hoppy Guide to Sampling Beer

Popular in the wine world and within the culinary realm sampling a presentation of flavors, styles, and textures has been a longtime practice. Giving customers the chance to experience a spectrum of what is on offer this method has translated very well into the craft beer world. I can think of no better way to taste a full portfolio of the best, the new, and the experimental of what a particular brewery has to offer.

flight (n.)-4. A group of similar beings or objects flying through the air together. 6. a continuous series of stairs from one landing or floor to another.

These two definitions are possibly the best link to sampling brews in the world of craft beer. In reference to climbing a flight of stairs drinking beer by way of flight is an apt comparison. Beer styles and flavor profiles are meant to be sampled in a specific order where progression to one brew can be viewed as a step up from the one tasted last.

Anatomy of a Beer Flight

The traditional term for the board in which the samples are served upon the paddle can come in many forms. At its most basic it is just that, a paddle. Flat and long to accommodate a varying number of brews, they are often displayed in one or several rows. Depending on the brewery’s theme or inspiration I have seen many unique and clever “paddle” designs. From wire mesh racks to cigar boxes, closed books to chrome metallic troughs there is no end to the creativity of how the flight is served. 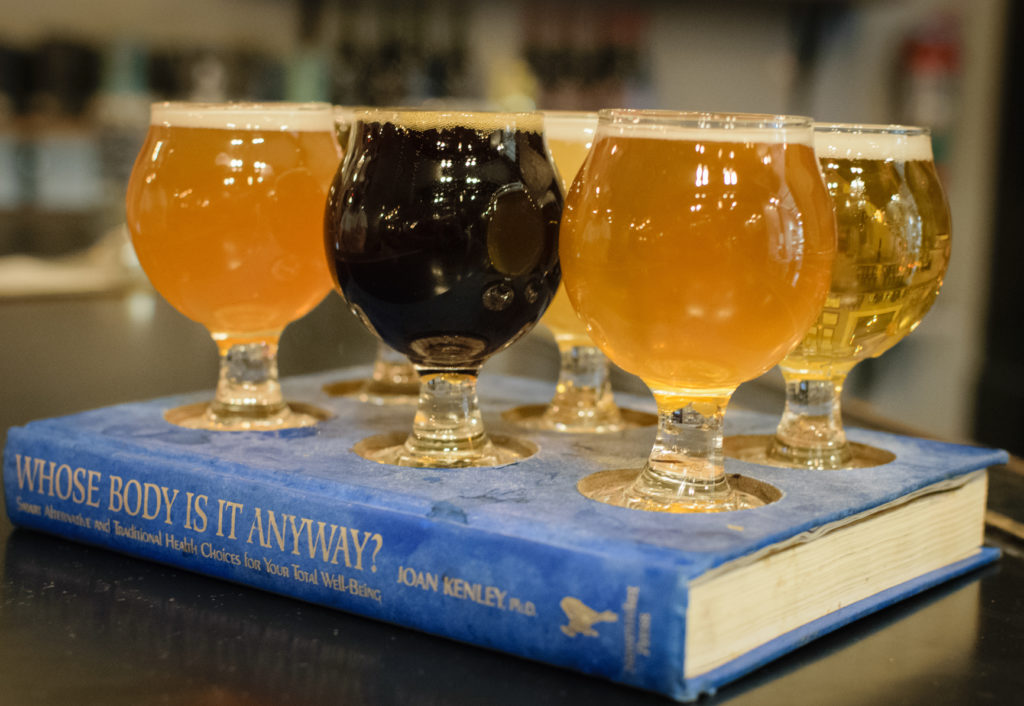 The type of glassware and size of a taster can vary from brewery to brewery. Typically you will see a range in size from 2oz pours up to as high as 6oz or 8oz with 4oz being a happy average. I will often run into breweries toting to have the “largest flight pours in town” but bigger does not necessarily mean better. Smaller pours offer the ability to try more of what a brewery has to offer without things getting fuzzy too quickly.

Like the paddle, the style of the tasting glass can vary by the creative whims of the brewery. Small economical pint or pilsner style glasses are typical but I have run into tiny snifters, small tulip glasses, or even little mugs. On the imaginative side I have sampled everything from small flasks to tiny laboratory beakers and graduated cylinders. 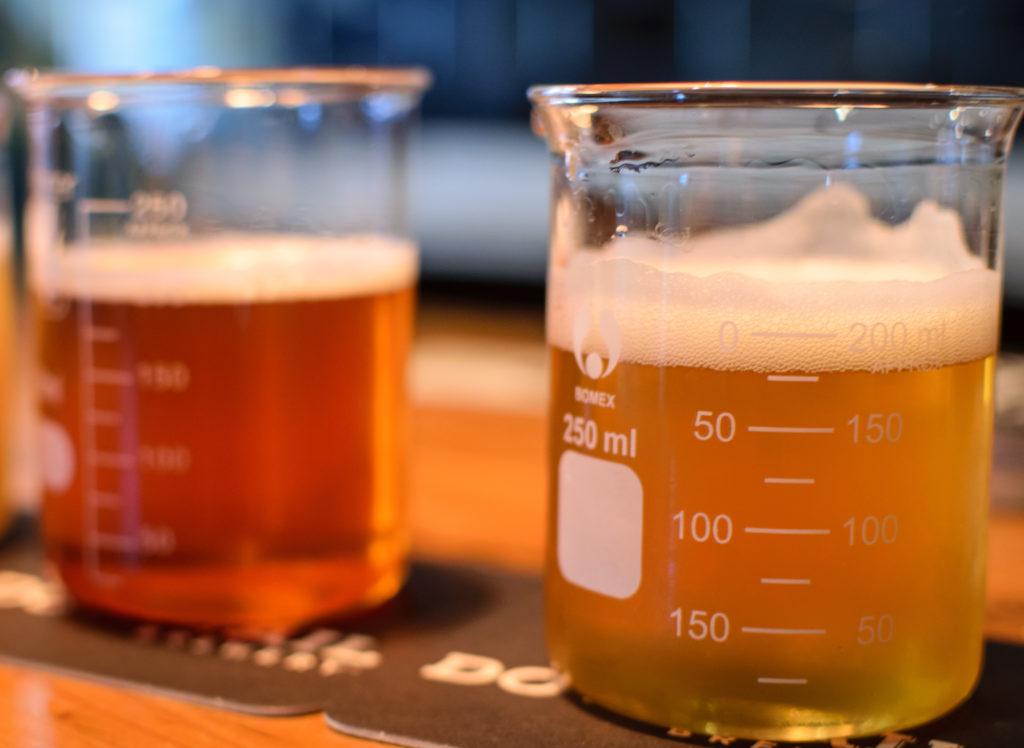 The Try Before You Buy

You build this flight according to your personal taste with the idea that you will purchase a full pint when you try the brew most pleasing to your palate. If you are undecided about which style of beer you want or if multiple items on the menu stand out to you this is the ideal formation for your flight.

This type of flight build is according to the range of the brewery’s best offerings. Typically constructed with an assortment of beer styles they can include flagship brews, seasonal specialties, award winners, and popular sellers. Building this type of flight insures you get to explore the complexities and talent of the brewery. You will get the best sense of what beers the brewer does best, in which direction their craft is headed and the brewing inspirations that have helped build their brand. 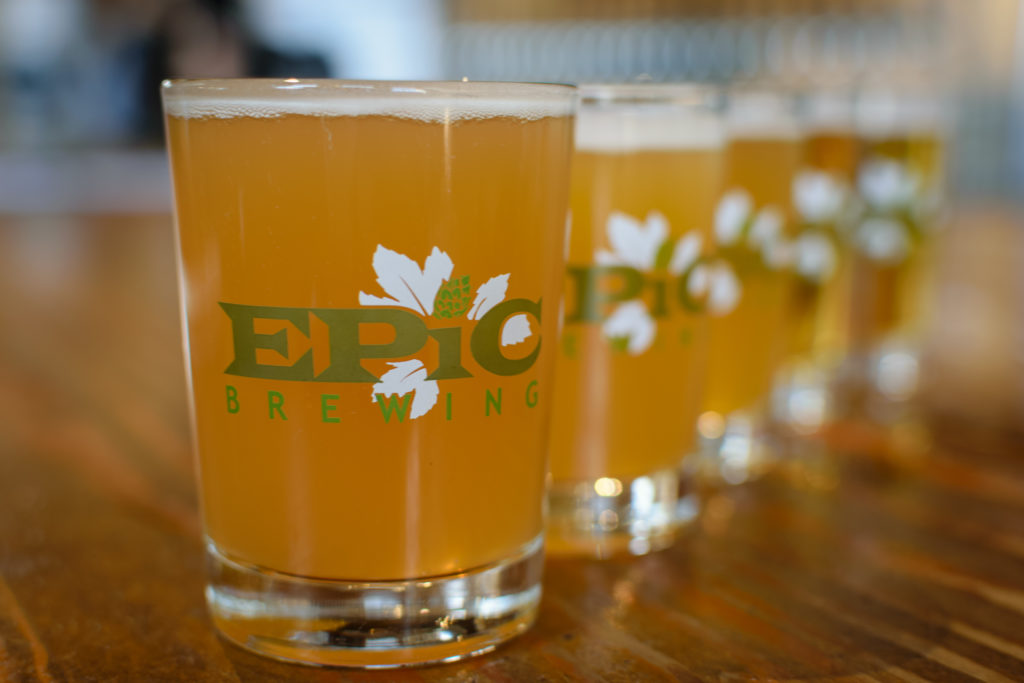 Drinking by way of beer flight is a great way to broaden your hoppy knowledge and break out of the typical styles you usually drink. Building a flight by selecting styles or types according to what you would not normally drink is an exceptional way to learn more about the craft industry and discover new flavors and profiles.

To really dive deep into the variations of a specific beer style this is the formation for you. Whether exploring the ingredient choices with a rack of sours or the bitter character between a family of IPAs or challenge your taste buds to differentiate the subtleties of a paddle of light lagers or ales.

When tackling your beer flight it is usually best to try your brews from lightest to darkest. This rule of thumb insures your palate does not become overpowered while tasting resulting in missing out on the complex profiles of certain beers. Lighter beers typically have low ABV and low hop bitterness and more subtle malty character. Sipping a stronger, darker brew first could cause you to miss the character of these lighter beers as your palate has adjusted to the aggressiveness of the darker beer.

If you are trying a flight of the same style of beer look for subtle changes of color going from lighter beers to slightly more malty or hoppy brews. If there isn’t much change in color, drink them according to ABV or IBU level.

Whichever formation you choose, whatever you are drinking out of, whichever order you drink in and whatever kind of paddle you drink off of the ultimate goal is to drink up, enjoy, and try some of the awesome and creative styles that make the craft beer world so fun to explore. 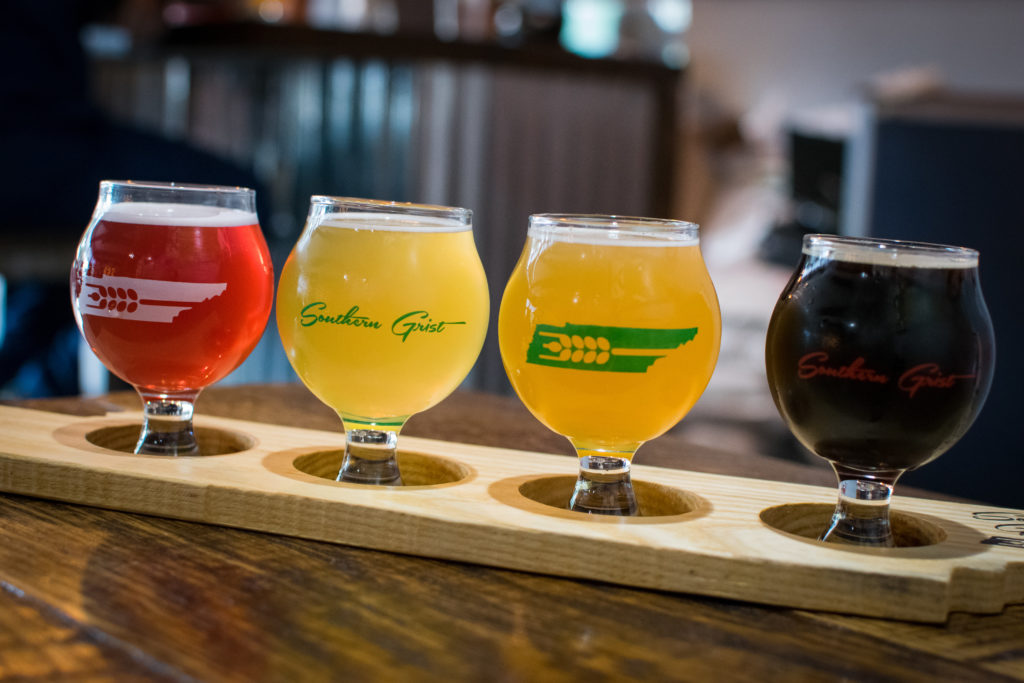