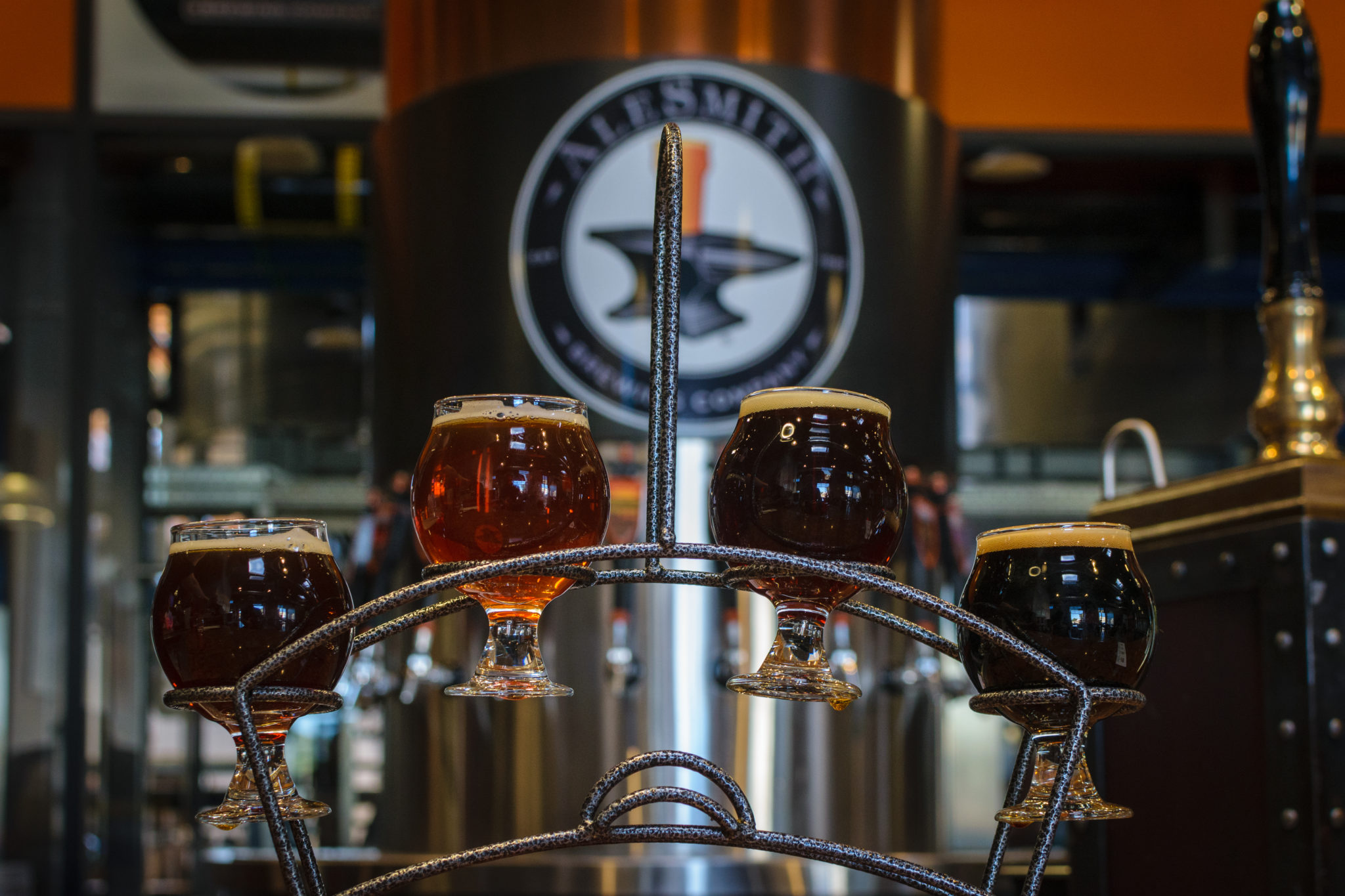 I drummed my fingers on the bar of the taproom as I awaited my rack of tasters. The brewery was big, holding the largest tasting room in the city. A spacious area that could easily accommodate a large crowd, there was plenty of seating and a giant wall of windows flooded the room with light. A couple large flatscreens hung from the ceiling broadcasting football while the Rolling Stone’s Gimmie Shelter played overhead.

As I looked down to pull the little row of beer glasses closer I skirted the rack past a little picture frame. I hadn’t noticed it when I sat down. In a simple wood frame the word “Thankful” was typed out in italics. It struck me as odd but I quickly put the frame out of my mind as I began sampling my beer. 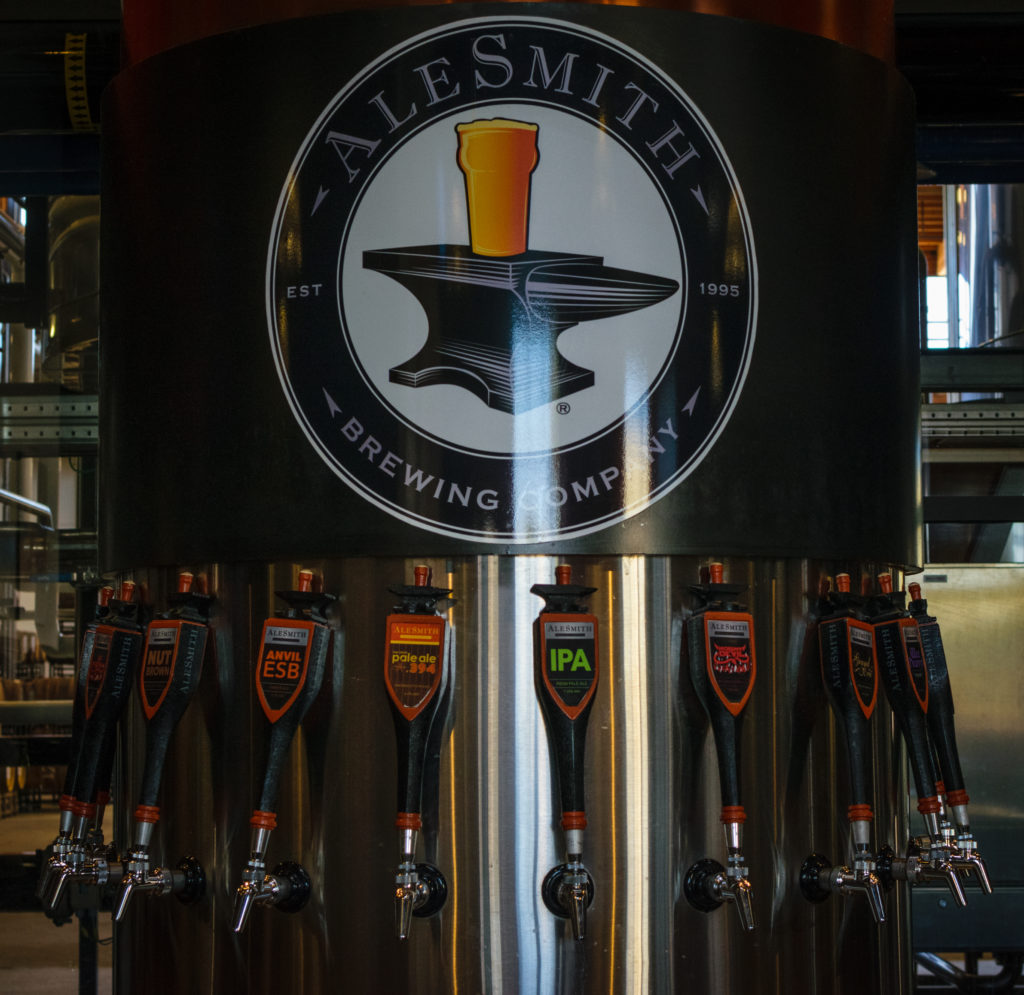 Opting to try Alesmith’s World Tour flight of beers I began tasting a compilation of beer brewed in the style of different geographic regions. The Nut Brown Ale brewed in the classic British style was a deep red in color and had just the right amount of biscuit and cocoa flavor. It was creamy and full bodied, I knew it’d do any English pub proud. Horny Devil is Alesmith’s signature Belgian style ale. The beer having won many awards helped put Alesmith on the map. Fruity and spicy, tasting it I was immediately hit with notes of coriander, peppercorn, banana and orange peel. Wee Heavy, another award winner is influenced by the northern hills of Scotland. Dark and as the name implies, heavy, this ale is rich with caramel and toffee flavors with hints of fruit. It also has those notes of roasted smokiness that I’ve come to love in my dark ales.

Sipping on Wee Heavy I peaked behind the bar through another wall of glass windows. Having just upgraded to the current location after almost two decades of award winning beer Alesmith expanded to a Steinecker 80 bbl brew system. Gazing through the glass the tall chrome tanks stood at attention quietly churning out Alesmith’s creations. Despite its size and the tasty beer the brewery seemed plain to me.

That was about to change. 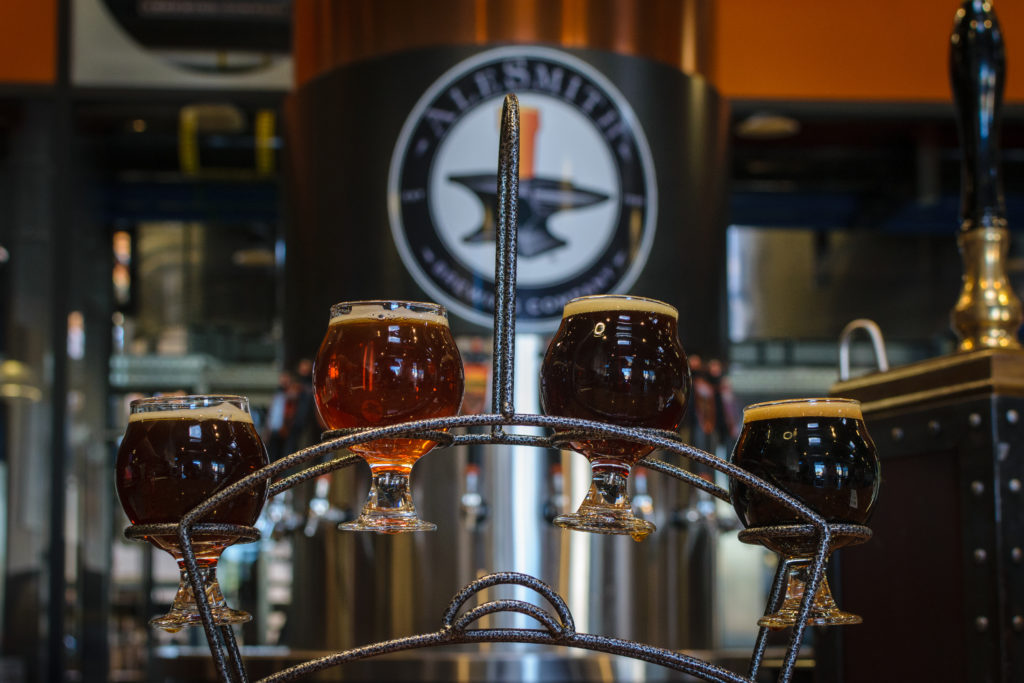 “Come check this out.” my host said as he pushed in his stool next to me.

Walking to the end of the taproom down a short hallway he gently knocked on a wooden panel.

“Password?” I heard a woman’s voice ask from behind the wall.

“Thankful” and with that we pushed open the panel and stepped into a dimly lit hidden room.

As my eyes adjusted I could see that I had just stepped back in time. One moment I was standing in a modern California brewery, now I found myself in the middle of a Prohibition era speakeasy. A period couch and armchair surrounded a short wooden coffee table that made up a small seating area. Against one wall a large walnut bookshelf held a collection of hardcover books. A framed poster of an old Ford Model T hung over the couch. In the corner a mahogany side table held a shiny phonograph. Soft 1920’s jazz music filled the room. At the front of the speakeasy stretched a small bar. Behind it, short neat rows of stout stemmed glasses and wooden barrels lined the wall.

The woman who allowed us entry stood at the bar chatting and laughing with the room’s only other patron. A lone man sat perched on a stool and when he spoke it betrayed a thick Scottish accent. So perfect was the period atmosphere that for a second I thought he was part of the room. 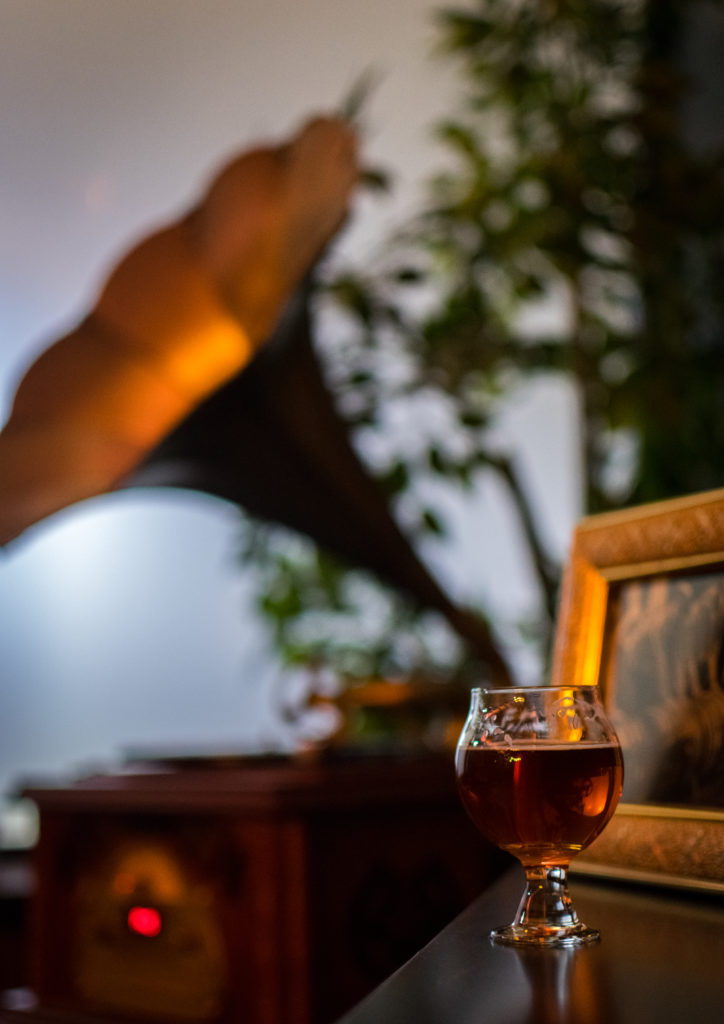 “What’ll you have.” the bartender asked. She gestured towards the bookshelf behind me.

Looking back at the shelf and seeing only books I hesitated before picking up an aged copy of William Faulkner’s Light In August. Flipping open the tome I found hidden inside a clipped copy of a menu. Anvil and Stave, the menu read. A Barrel Aged Beer Experience. Below was listed a wide variety of Alesmith’s barrel aged beers. Some of their regular hits such as Wee Heavy made a second appearance now aged to maturity in port barrels. Others such as the Old Numbskull, a barleywine and the Reforged XXI were aged in bourbon and rum barrels respectively.

“This is amazing,” I said, half aware that I sounded like a kid in a candy store. “What a great idea.”

“Yeah.” the bartender agreed, “It can get pretty crowded in here.” She gestured towards the small space in the room. “When it gets real busy we usually issue tickets to people out in the main taproom.”

I nodded, having a seat in the armchair. I was still completely blown away by the unexpected experience. Alesmith, despite being around for 20 years was keeping things fresh and exciting. Cranking out delicious beer while at the same time capitalizing on the passion and creativity that got the brewery off the ground in the first place. My time at Alesmith was two experiences in one and taught me to never underestimate the creativity and ingenuity of brewers. Cozy in the soft armchair with a barrel aged beer in one hand and a copy of Faulkner’s novel in the other I didn’t want to leave.