While being only 15 minutes away from downtown Denver, New Terrain Brewing Company, nestled in the Rocky Mountain foothills of Golden seemed a world away from the big city.

“It’s really the best of both worlds.” said, Michael Roberts, New Terrain’s Sales and Distribution Manager. “We’re close enough that we still get a lot of awesome folks from the city while still getting to be near this.” he stated the last part with a hand gesture out the taproom’s far window. Outside the hulking mass of North Table Mountain rose high above the brewery. The mountains were certainly close. So close in fact that the brewery’s parking lot acted as a local trailhead. 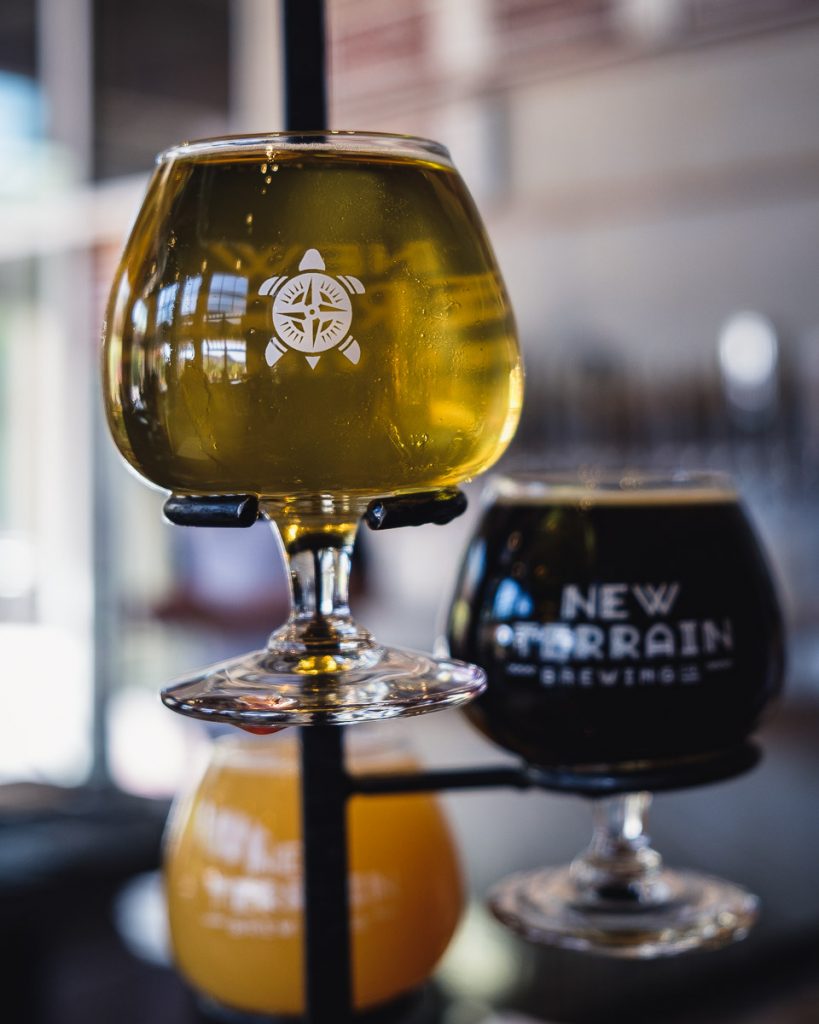 “It’s great.” Mike added, “You can come up here in the morning, park your car, day hike up in the hills then come down in the afternoon and grab a cold beer.” The brewery had even gone as far as to have hitching posts installed outside so those riding the trails on horseback could tether their steeds before grabbing a beer.

It was all delightfully Coloradoan.

Despite the outdoorsy feel, New Terrain is ever privy to the goings-on of the city with many Denverites happily braving Front Range traffic to venture out to Golden to sample some of New Terrain’s latest brews. It’s no surprise the brewery will be making its presence known at this years GABF. Mike walked me through some of the beers New Terrain will be pouring at the annual festival.

Atlantis, a New England Style IPA bursting with juicy, hazy, hoppy goodness, chiefly Azaca and Citra hops. Belgian Wit, the 2018 fan favorite and Silver Medal winner is making another appearance with its floral notes of citrus and spice. Punky Masala will also be on tap. A seasonal offering it uses a variety of Indian spices with hints of cinnamon and clove to make a stand out autumnal beer.

You can catch New Terrain Brewing Company pouring at booth 3-4.

Only 20 minutes north of Denver it was quiet. Away from the hustle and bustle of the greater metro area I could hear the birds outside and see the rustle of the breeze in the grass. The taproom doors were wide open on a warm and sunny weekday. No car horns, sirens, or screeching tires pierced the air. I looked out beyond the grass and saw the mountains of Colorado’s Front Range looming in the distance. No buildings obstructed my view.

“The quiet is definitely a big advantage, I think.” said, Houston Hanna, Rails End Brewing Company’s Taproom Manager. “Being in smaller town like Broomfield we definitely have a greater sense of community here.” He gestured towards some of the people sitting around the bar. “Everyone here knows each other, it has a real family feel.” 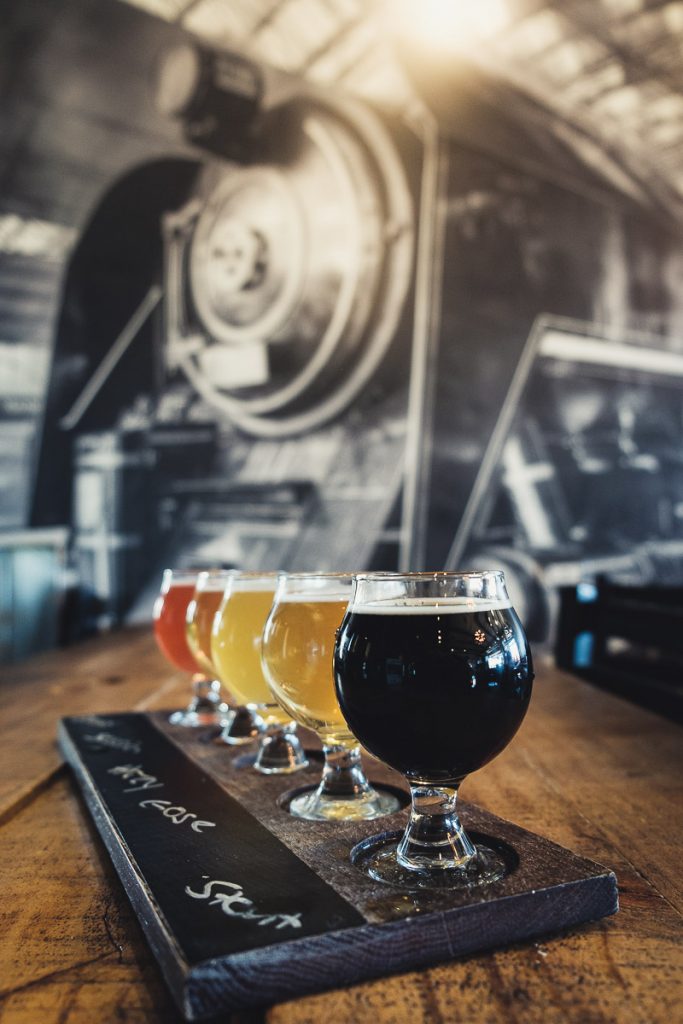 Just taking a look at Rails End’s event calendar told me that the local brewery and its founder, Dale Reeder had indeed built itself up into a fixture of the neighborhood. Chili Cook Offs, Movie Trivia Night, a Corn Hole League and tons of live music showed that the people of Broomfield and beyond gathered around much more than beer when they stopped by Rails End Brewing.

Despite all the happenings at home, Rails End isn’t shying away from getting into the GABF fray.

“We’re pouring some of my favorites this year.” Houston, said setting up a taster board for me.

Indulge, a session IPA is a well balanced all day drinker. Combining flavors of citrus and rich tangerine it ends with a crisp and refreshing hint of blueberry. Blood Orange Double IPA combines the namesake fruit with copious amounts of grapefruit, citrus and juicy hops to make for a strong bitterness that will satiate the hoppiest of hop heads. The Key Lime Gose is a sour brewed in the traditional style but combining a balanced dash of salt and the delicious addition of Key Lime puree.

Three and a half years ago New Image Brewing Company burst onto the Front Range beer scene and immediately made a name for itself amongst the Colorado world of hazy and hoppy. While sporting a number of varieties New Image’s focus on sours and New England style IPAs has been perfected with delicious results. With Vermont inspired brews and others with names like East Coast Transplant, New Image isn’t shy about its inspiration and roots.

I sat up at the bar next to Mike DeWitte, New Image’s Canning and Production Manager. “There’s a lot of influence from back East.” he said, “The brewery was founded on techniques honed in Pittsburgh and Atlanta.”

The skills practiced on the other side of the country served the brewery well, now more than three years later New Image is a staple at local liquor stores and brewery regularly finds itself collaborating and creating with other Colorado Hazy Heavy Hitters like Weldwerks Brewing Co. and Outer Range Brewing Co.

“We won’t be pouring this year.” Mike said in reference to the upcoming festival. “But we’ve got tons going on here all week.” he smiled, “Its going to be a nonstop party.” 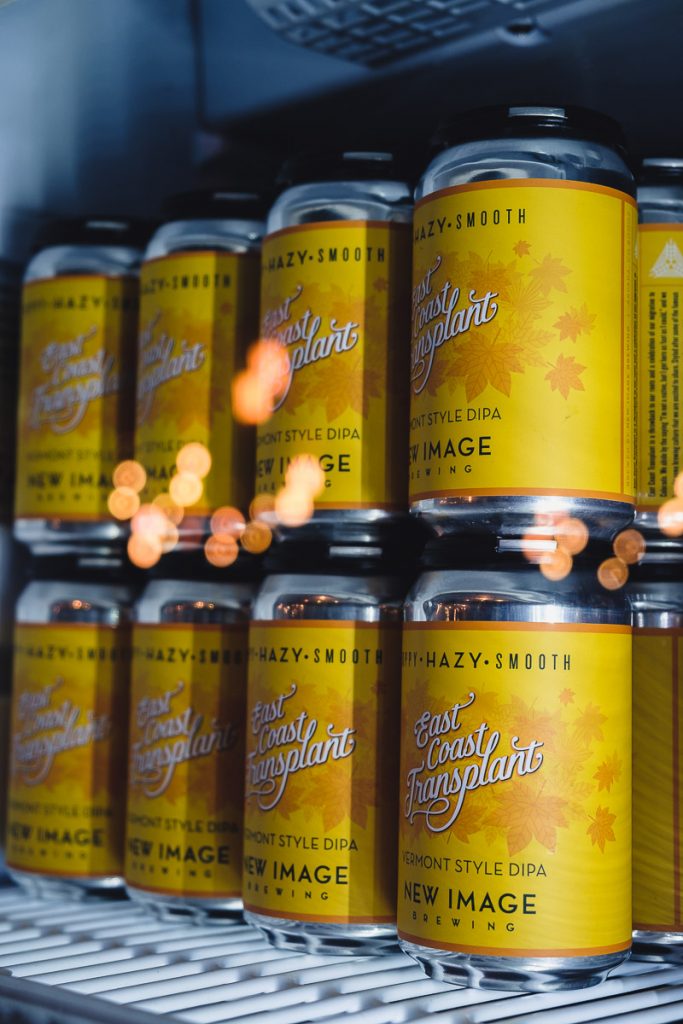 Mike wasn’t kidding. New Image was putting on a GABF week celebration of their own. Kicking off Tuesday with five days of rare beer tappings, special can releases and non-stop collaborations. Breweries and friends would be making appearances to take over the New Image taps with features from Weldwerks, Falling Rock, Outer Range, Ology Brewing and Transient Artisan Ales.

Of course New Image favorites and seasonals will also be on tap. Palisade Peach Maceration, a seasonal fruited sour utilizing Colorados very own and delicious Palisade Peaches. Pay It Forward, a DDH NE IPA with Mosaic and Nelson Sauvin hops. As well as some recent collabs such as the hilariously named Freak Gasoline Fight Accident, a fall seasonal collaboration with Weldwerks featuring cinnamon, clove, coffee and nutmeg to make a warm and rich imperial stout.

You can catch Mike and the gang all week in New Image’s Arvada taproom.

GABF GIVEAWAY: Your weekend doesn’t end until the last award winning keg gets tapped and we want to make sure you’re at Saturday’s exclusive VIP tasting session with some sweet swag. Rules: 1) Check out the lastest Hoppy Thoughts blog featuring some of our favorite suburban Denver breweries. 2) In the article you’ll find a riddle, the answer reveals the booth location of the treasure box with the tickets and swag! 3) Drink up! For the love of the beer.

Riddle: The name of the brewery is an homage to beer as the planet’s greatest social uniter.